A custom harvester and his big box

Wiebren Jonkman came from Holland to the United States in 2004 on an exchange program. He started out working for a custom chopping outfit and then became a herdsman for about two years on a dairy in California.

“That was the plan,” he says, “to get some ‘life experiences’ and then return home.”

But, as it often happens, fate took over, and his life went in a different direction.

“I saw some opportunities, met my future wife and ending up starting my own business.”

“I always wanted something of my own. I saw an open spot in the market here and thought, ‘let’s try it,’” and he started a custom harvesting, manure spreading and farming business. In addition, he now also operates a mobile repair unit for local dairymen.

His wife, Luciana, is a dairy nutritionist who helps and supports him by doing the paperwork and keeping him in line for quality.

His clientele are primarily dairymen within about a 20-to-25-mile-radius. He is busiest in the early spring, harvesting winter wheat for silage, and late summer through early fall with the corn silage season.

His crew consists of about 18 during harvest season and four that work year-round.

As his business has grown, so has his need for equipment.

Off-season is the time for equipment maintenance and repair.

“All of our work, except things under warranty, are done in-house. I’ve got guys who want to work in the winter, and we save a lot of money by doing the repairs ourselves.”

Finding a niche
As Jonkman observed local and international regulations for agriculture manure handling, he recognized a new business opportunity.

“Coming from Europe and knowing what the regulations there are like, I figured local legislation couldn’t be far away.”

One client, a smaller dairy in California that grows a lot of their own alfalfa, hired Jonkman to spread their liquid waste on the hay fields. Although he had to be careful to not burn the plants spreading during the summer, they saw great results.

Another local farmer took soil samples immediately before and after application.

“They couldn’t find anything different, and they were really disappointed at first. They had spent a lot of money on manure hauling, and nothing was different. But by the time the crop came up, that opinion totally changed.

We had a little test plot, about 100 feet in the middle of his field, and all the way through the growing season you could see the results. The nutrients just needed some time to break down. Everything has turned around now, and he wants to do it again.”

Jonkman sees more government regulations coming in the future and plans to stay ahead of that by using injectors, so manure can be incorporated into the soil right away. He sees a bright future in the manure-hauling business, especially as the dairy industry continues to recover. 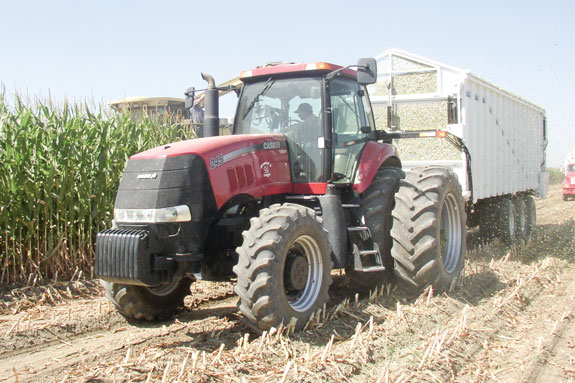 Bigger and better
One of the biggest challenges Jonkman faces is the small window of opportunity to harvest and pack silage each year.

“In my eyes, you always hauled with trucks, but it was never enough. One guy could only bring a little bit of silage to the pile at a time.”

He reflected on how equipment of this type was built in Europe and thought there had to be a better way.

In February 2009, Wiebren attended an equipment show in Paris, France, with the sales manager and owner of Laird Manufacturing to gather some ideas.

They explored the idea of building bigger silage trailers that could be pulled behind a tractor, and they set about drawing some blueprints, going back and forth with ideas.

Laird Manufacturing, which started in 1937 as a local welding shop, began manufacturing cattle-feeding equipment in 1989. Although the core business is horizontal and vertical mixers, the company has expanded over the years to include manure-spreading equipment and delivery boxes for the beef industry.

Taking on this new endeavor allowed the business to continue to diversify and offer dealers a more varied line of equipment.

After approving the final plans, Wiebren ordered two of the “prototype” trailers in early spring, hoping to have them in time for the silage chopping season. Although it was a tight schedule, delivery was completed only a week or so after harvest had begun.

“This has really been a ‘feather in our cap’” said Isaac Isakow, president for Laird. “We had never built something that big or done a project like that. We employ about 45 people and just about everyone, at some point in the production cycle, had a hand in it. There was a great team effort in engineering and production, considering how few problems we had right off the bat with a brand-new product.”

The largest silage trailer currently available in the U.S. each can haul nearly double what a regular box does – about 50,000 pounds in one load.

“Even though they travel slower than trucks, since they haul twice as much, it should come out about equal. But the true savings are in fuel and labor,” Jonkman says. “If it [the silage] is all around the dairy, I can do it with two trailers versus five trucks.”

In addition to size, other little details make these boxes a smart business decision. There is an on-board weighing system so drivers don’t have to go to the weigh bridge with each load.

Batching software downloaded from these electronic scales also allows Wiebren to record how many tons were harvested for each customer by field and assists in the billing process.

Another advantage of the silage trailer is that it is pulled behind a tractor. When chopping season is done, the tractor can be used for other tasks throughout the year versus having the chopper on a fixed mount. And, if there is a problem with the tractor, it can easily be switched out for another to keep the harvest running.

Quality counts
For Jonkman, however, it’s not just about efficiency.

“With my dairy background, I realize that quality counts. If you don’t put a quality product in the pile, the dairyman is not going to gain anything from it.” His team pays special attention to chop quality, sharpening knives more often for a more uniform and cleaner cut that results in better fermentation.

Quality was also considered in the actual design of the silage box itself. Flotation tires and special 36-ton triple axles imported from Europe allow crews to get into the fields sooner without getting bogged down in the mud. This also reduces soil compaction in the field.  FG