Melissa Hart
Looking at the possibilities of latest technology on the dairy farm, Kyle O’Brien of Michigan Dairy Technology provided a glimpse into the future with automation in mind at the recent Great Lakes Regional Dairy Conference held in Frankenmuth, Michigan.
Melissa Hart

O’Brien has been working in information technology (IT) since 1997 and specializing in the dairy industry for nearly eight years. “I thought it was more fun to work on dairies than crawling under desks in businesses,” O’Brien said. 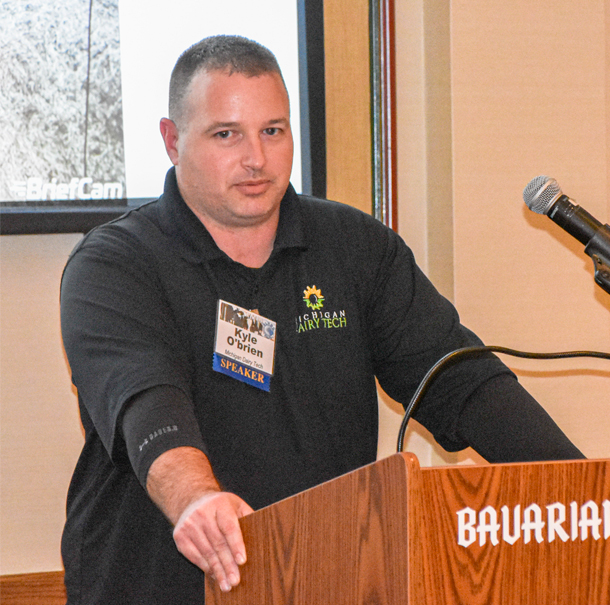 Video surveillance on the dairy farm is growing in popularity as producers come into compliance with the Farmers Assuring Responsible Management program (FARM). With consumer concern on how food is produced at an all-time high, O’Brien said he believes this will not only help keep everyone in compliance but increase profitability.

“Being able to verify that producers are doing everything correctly, [surveillance video] can be a time saver and help mitigate risk,” O’Brien said. “You have to put out a good product, and consumers are conscious about where their food is coming from. If you can verify that everything on your farm is legit and on the up and up, you may be able to get a better price for your milk or at least maintain the market that you have.”

Animal welfare issues may not be an issue for everyone, but some producers believe they will be able to sell their milk based on proper animal welfare. O’Brien said, “The millennial consumers are different than those of us in the older generation. If they see two products on a shelf, and if they feel good about buying one product over another, they will buy it.” O’Brien said he sees this as a huge factor in the future.

As a reaction to animal welfare groups producing detrimental videos, the demand for surveillance cameras with artificial intelligence (AI) has increased. “One of our customers recently put cameras in, and they wish they had done it 20 years ago,” O’Brien said. “They were concerned that their employees would think they don’t trust them, but they had a different outcome. Their employee work performance increased.” They are also finding that the work culture is improving. He added, “The accountability makes the work culture rise up where it should be.”

The most common AI technology applications are for animal welfare. According to O’Brien, in the future you will be able to see aggression toward a cow, and the system will send alerts to your electronic device as it’s happening, not something you have to review on a processed report.

Using a smartphone has become commonplace with security systems, and it’s the same with surveillance systems on the farm. As a result of having these installed, O’Brien said they can reduce veterinary bills, open doors, remotely perform tasks, monitor water levels and receive text messages when there are issues.

In 2008, a customer had a problem with mastitis. O’Brien placed six cameras in the parlor to monitor the employees’ protocol on how they were prepping the cows for milking. When he checked back with the producer to find out if he was satisfied and if they needed any modifications, the producer reported a drastic reduction of mastitis, lower vet bills and the system had paid for itself.

In the future, everything will have sensors on it. A crowd gate will tell you which pen you are milking, or the fans in certain barns will automatically turn on when cows are present. They are making dumb systems smarter. Data has improved in the recent past. Producers are not having to interpret the data because the information is much more direct and simplistic to understand. This takes away the decision making for lower-skilled workers.

Video surveillance cameras can take a full day’s footage and process it into a smaller window of time for the manager to review. Securing the network is also necessary to protect the farm on the inside. Security protocols can be put in place to keep bad actors from taking video footage from the farm network. “A year ago, I could hardly talk about this with producers. But, this is a much easier conversation to have with producers since the viral video from Fair Oaks Farm came out,” O’Brien said.

According to O’Brien, the next step with surveillance video is to not have a human constantly watching the video. Real time response can happen when the videos detect a human in a pen, then the reviewer can watch the video and report anything that needs to be taken care of. Or, farms can invest in a service that monitors the farm, and alerts are sent out as needed. The person monitoring the video would be FARM certified, and there will be protocols specific to the farm. Each farm will have standard operating procedures specific to their farm, so the person monitoring will know what’s acceptable and normal.

Cameras can also be used on mixing equipment to monitor how the feed was mixed, and if a mistake was made, they can trace it.

O’Brien said they can help integrate many of the software packages commonly used by farms. Software can be fine-tuned to ensure these systems are communicating efficiently with each other. They currently have experience with several current systems commonly used on the farm, including Valley Ag Software (VAS), DairyComp 305, Feedwatch, TMR Tracker, PC Dart, Afifarm, Alpro and Lely. While all of these data points are growing, they are still developing ways to store all of the information efficiently.

The investment of new technology and surveillance programs can be large, but, according to O’Brien, the payoff is huge, and the investment will last approximately five to 10 years before the system will need upgrading.

PHOTO: Kyle O’Brien of Michigan Dairy Technology provided a glimpse into the future with automation in mind at the recent Great Lakes Regional Dairy Conference. Photo by Melissa Hart.

Melissa Hart is a freelance writer based in North Adams, Michigan.

MILC Group is a California-based company that brings innovation to the dairy industry through cloud technology.