Immune challenges of the young calf

Born without antibodies, calves face challenges in the first months of life. A good foundation and careful disease prevention through measures such as quality colostrum management, dry cow management and vaccination protocols is essential for healthy calves.

The first two months of a calf’s life are a critically important period that lays the foundation for their future health and productivity. Exciting current research has shown that high pre-weaning growth rates impact future productivity of calves by improving milk production in the first and second lactation, age at first calving and longevity within the herd. So if we’re able to keep calves healthy and growing well during this critical period, we can really make a positive impact on these important outcomes.

Unfortunately, there are specific challenges calves face because of the way their immune system develops that leaves them vulnerable to disease in this period as well. The immune system of the young calf is not fully developed compared to that of an adult cow, which changes how we need to approach vaccination and immunization.

The first challenge is: Calves are born without antibodies needed to protect them from disease. In cattle, the placenta blocks the transfer of antibodies between the dam and the calf. Practically, we know calves require colostrum. Colostrum is how calves acquire maternal antibodies from the cow to help protect them from disease in the first months of life, while providing many other benefits as well. The type and amount of antibodies in colostrum reflects the immunity developed by the dam, either by exposure to natural infection or vaccination. This is also why there are vaccination programs that aim to boost the level of antibodies in pregnant dams, against common scours pathogens for example, so high antibody levels are present in the cow when colostrum is produced.

Finally, the maternal antibodies calves acquire through colostrum, while essential for a young calf’s health, can block the calf’s ability to respond to a traditional injectable vaccine during the first months of life. This can create a period of time or “window of susceptibility” where calves have decreasing levels of maternal antibody, and don’t yet have protective levels of their own antibodies that their immune system produces when they are vaccinated or exposed to pathogens in their environment (Figure 1). 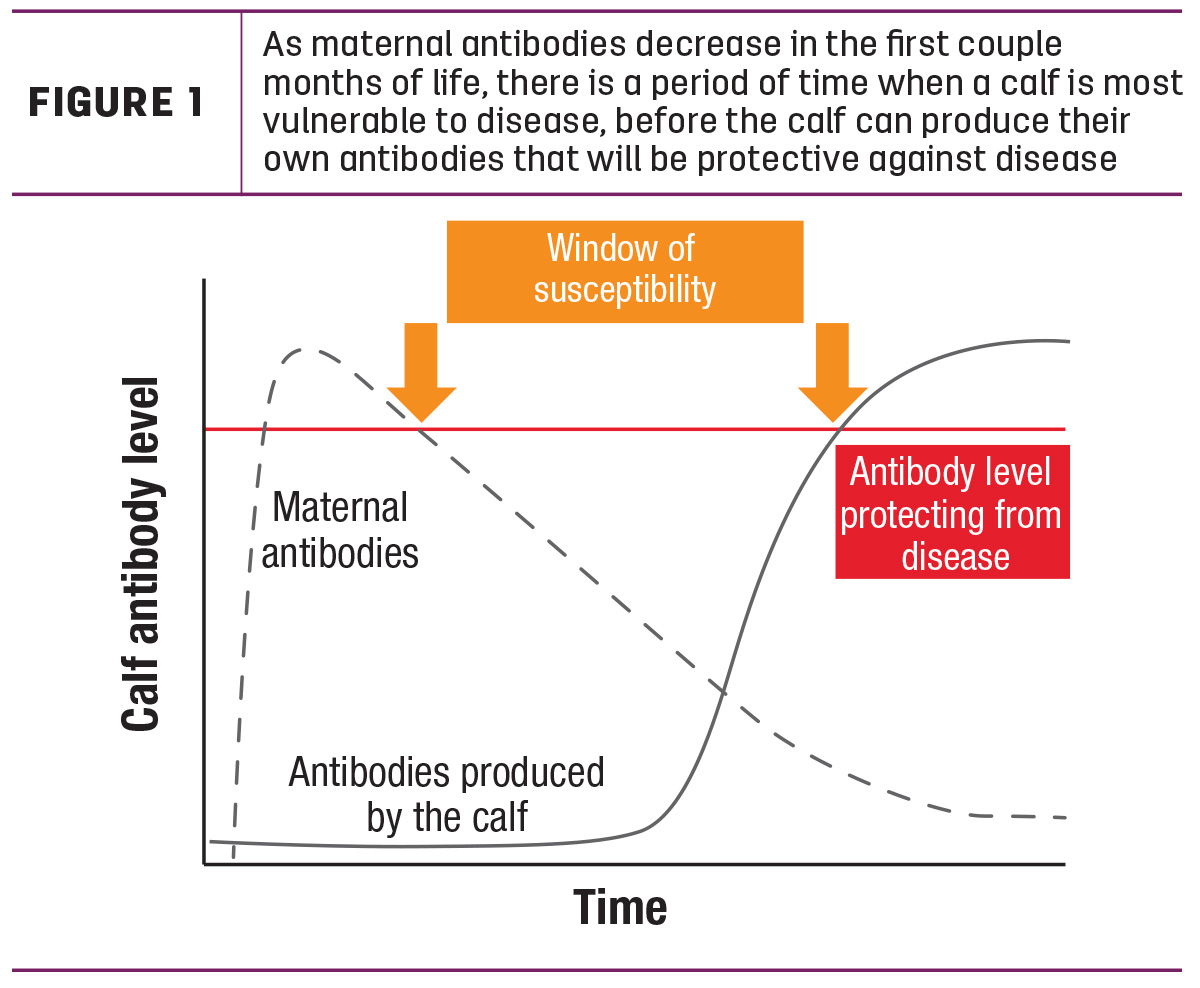 The consequences of these immune challenges are well known to producers, as it contributes to common calfhood diseases such as bovine respiratory disease (BRD) and scours. Both BRD and scours are multifactorial diseases and are impacted by factors such as management and nutrition, though ensuring that calves have optimal immunity is extremely important as well.

There are major economic and welfare consequences of both BRD and scours. Calves diagnosed with respiratory disease are almost three times more likely to die, and recent research has found those that go on to complete their first lactation produce over 120 kilograms less milk than heifers that did not have BRD as a calf.

According to survey data from the U.S., over half of pre-weaned heifer deaths are due to scours. And those calves that do survive grow at a slower rate, cost more to raise and calve at a later date. This is in addition to the welfare concerns of having high rates of scours, which has been shown to be a very painful condition for calves.

So while there are challenges posed by the young calf’s immune system, and a severe cost of disease, the good news is: There are ways we can help overcome these obstacles to help raise healthy calves.

There are three major ways a calf develops immunity. It starts in the first moments of life, when they receive passive transfer of immunity through the ingestion of colostrum and absorption of the maternal antibodies it contains. It also occurs naturally as the calf’s immune system matures and it encounters pathogens in its environment and makes its own antibodies. And the third way is via vaccination, and the way we vaccinate our calves can make a big difference.

But before we think about vaccinating calves, it’s essential to ensure successful passive transfer of immunity. There are many essential benefits associated with successful passive transfer of immunity for calves, including reduced treatment rates and mortality, improved growth rate and feed conversion, reduced age at first calving and increased milk productivity. So a good colostrum management program is the essential foundation when we talk about building immunity in calves.

Specific recommendations for your colostrum management program should be reviewed with your herd veterinarian, but a good starting point would be to aim for feeding a sufficient amount of clean, high-quality colostrum. For an average Holstein calf, that generally amounts to a feeding of at least 4 litres of high-quality colostrum as soon as possible after birth, with a second colostrum feeding at eight to 12 hours after birth. Colostrum programs should also be evaluated regularly. Since there are many aspects to consider, consult with your herd veterinarian about developing a colostrum monitoring program that measures such factors as the cleanliness and quality of colostrum, as well as the success rate of passive transfer for your calves through measurements like total protein analysis.

Central States Testing is the leader in BVD-PI diagnostic testing with options of in lab or on site testing.