With as little as 16-kilometre- per-hour winds, a properly designed natural ventilation system will provide more than adequate air exchange for your dairy during hot weather. Wind at the appropriate speed blowing against the sidewall provides air movement of 88 cubic feet per minute (CFM) per square foot of opening. In a 200-foot-long building with a 10-foot-tall curtain opening, you would be moving the equivalent air capacity of 39 72-inch-diameter fans without the operating costs.

The drawbacks to a full natural ventilation system arise during periods of high temperatures, high humidity levels and little or no natural air movement from wind. In these situations, adding additional power ventilation equipment to create velocity cooling for your animals has become a popular choice. The equipment and systems outlined below are commonly used for this purpose.

These types of fans create a high-speed horizontal air flow over the cows’ skin that provides them with the same cooling sensation we get if we put our face in front of a fan on a hot day. The temperature of the air is not lower, but the speed of the air creates a cooling effect.

A typical layout for panel fans would be to place a line of fans over each row of stalls and each row of feedrail. The distance between fans will vary depending on the size of fan being used while maintaining an approximate rate of 500 feet per minute air speed. With a 50-inch to 60-inch-diameter fan, you would have them mounted roughly 50 feet on center. The fans should also be angled downward to ensure the cows feel the air moving over their bodies.

As with any system, there are both pros and cons to consider. While a high-speed panel fan setup has a lower initial purchase cost compared to other potential options, the electrical operating costs are higher. An additional concern is: These fans typically operate at a higher noise level.

These fans usually have a three-phase motor that can operate on a variable-speed basis with the addition of a variable frequency drive (VFD). In this setup, the fans can be connected to a ventilation controller that will automatically speed them up or slow them down based on changes in the interior temperature over a 24-hour period.

Although the initial cost per unit for cyclone fans is higher than that of other fan styles, it is important to remember: Fewer units are ultimately required and they run with lower electrical consumption and operating costs. 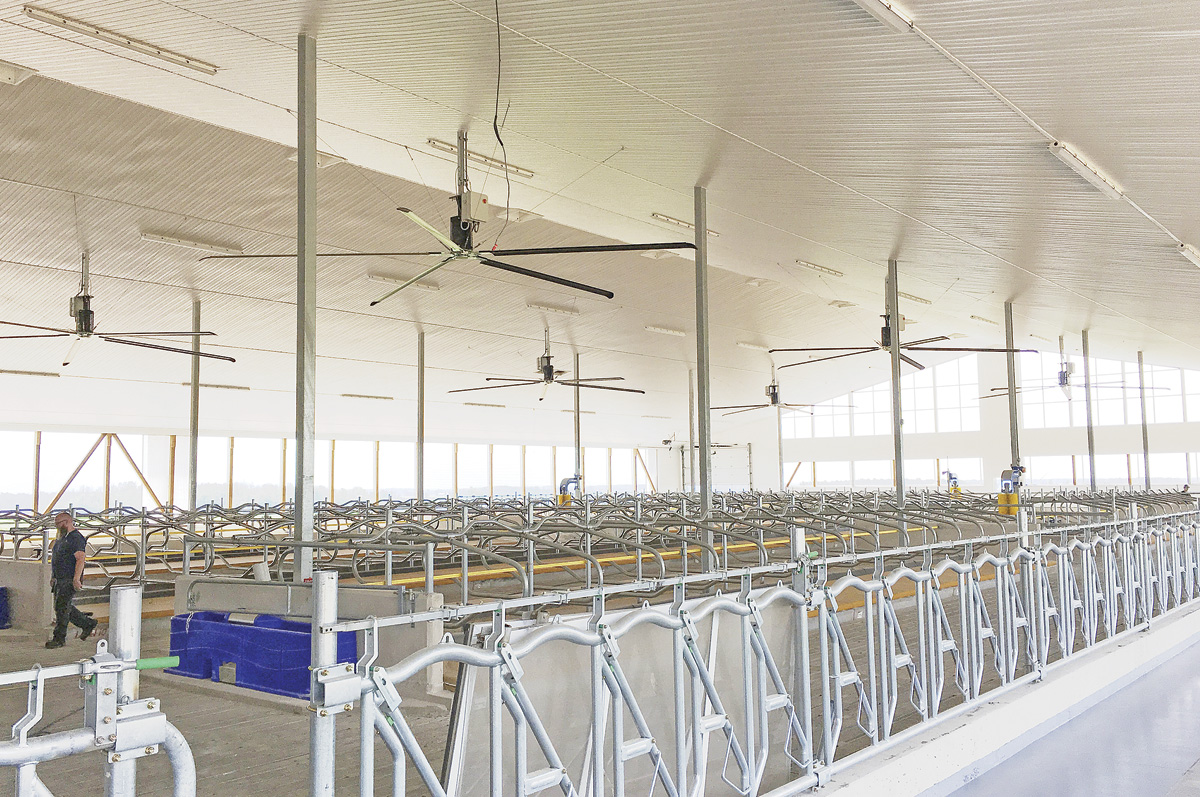 HVLS fans are very large ceiling fans ranging from 8 feet to 24 feet in diameter. They operate at a very low speed (approximately 60 RPM) but due to the size and design of the blades, they can move extremely large volumes of air at speeds high enough to provide velocity cooling.

The air pattern created with this style of fan is different than the other two systems previously mentioned. HVLS fans create a column of air equal to the diameter of the fan that moves downwards and radiates out 360 degrees from the position of the fan. The outward column of air is typically 3 to 4 feet high.

These fans also use a three-phase motor and VFD unit for variable-speed operation. In addition, HVLS fans can operate in reverse, moving air up instead of down. This is helpful in colder weather, when you can set the fan to operate at minimum speed in reverse. This upward air movement will destratify any heat that is layered near the ceiling and recirculate it throughout the facility. This type of air movement also helps control humidity and condensation inside your barn during cold weather.

HVLS fans have the highest initial cost of the systems noted here, but they have a large coverage area and very low operating costs. In some areas of the country, rebates on these fans are being offered by electrical authorities thanks to their high energy efficiency. HVLS fans are extremely quiet compared to other options due to their very low operating speed. 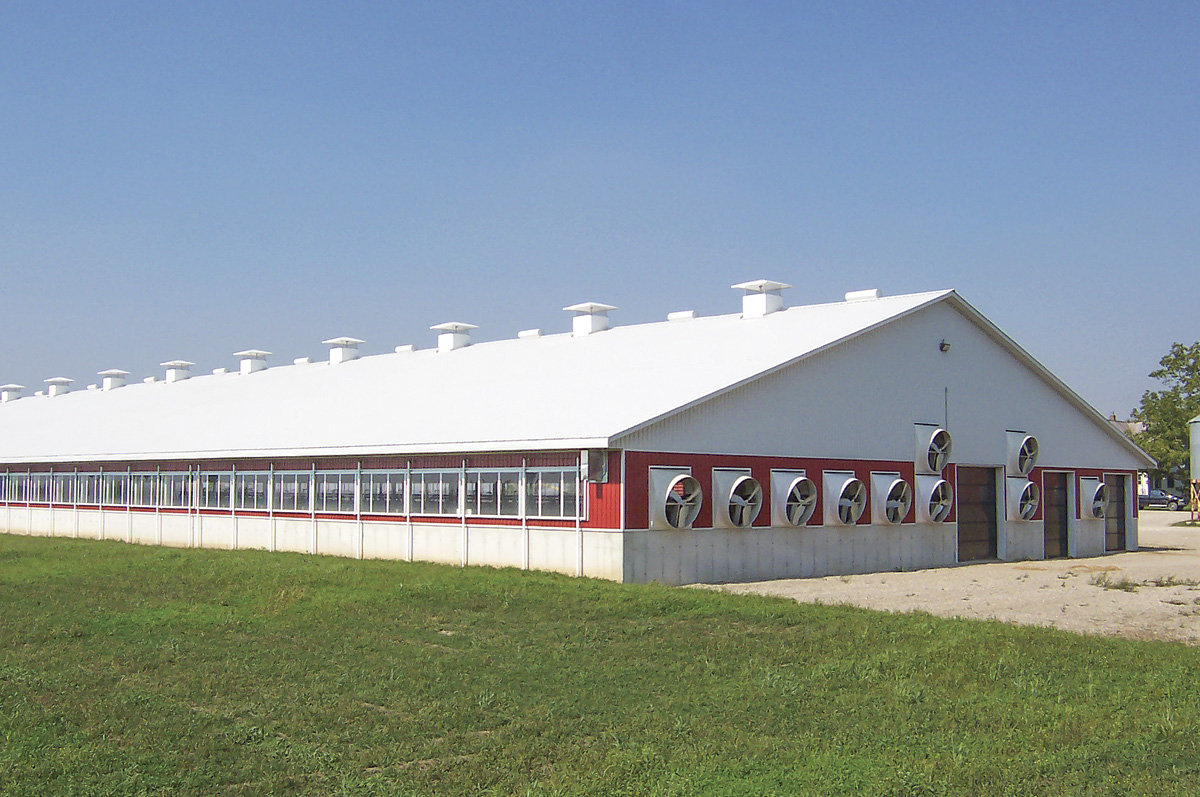 A barn with tunnel ventilation. | Photo by Rick McBay.

Unlike the systems noted above that use interior air for velocity cooling, the tunnel ventilation system uses exterior air brought in through an inlet opening on the end wall of the barn, which is then exhausted with wall-mounted fans at the opposite end, creating a wind tunnel. As with the other systems, the purpose is to move high-velocity air over the cows to create a cooling effect. The challenge with this type of system is keeping the air down low enough from the ceiling that the cows feel the movement. In some cases, interior baffles are used – and in other cases, indoor circulation fans are added to help with directional air flow and speed.

Tunnel ventilation systems can create some design challenges in a typical dairy facility but can be very effective for summer cooling. Initial costs will be comparable to other systems, with long-term operating costs on the high side.

All the systems described will provide effective velocity cooling in your dairy to avoid potential heat stress caused by high-temperature conditions. Water cooling systems are also available for additional evaporative cooling that can be combined with any of these systems. However, care needs to be taken to avoid having this moisture add to high humidity conditions within the barn.