We use cookies to provide you with a better experience. By continuing to browse the site you are agreeing to our use of cookies in accordance with our Cookie Policy.
Advertisement
Advertisement
Advertisement
Home » ‘You wouldn’t believe the stuff I’ve tried’: Ontario dairyman designs innovative barn after 18 years of experimentation
Comfort & Cooling 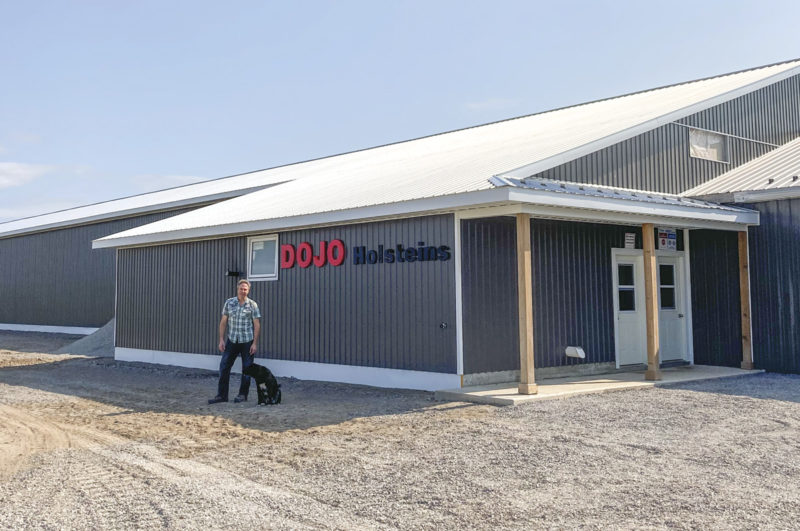 After years visiting other farms as a hoof trimmer and feed consultant, Donald Russell of Dojo Holsteins took stock of other farms’ merits and shortcomings to carefully develop his now-patented barn design. Photo provided by Donald Russell.

Dairyman and avid scientific journal reader designs and patents his own stall-free dairy barn after 18 years of trial and error in pursuit of supreme cow comfort.

Have you ever felt like the solution to your problem would be achievable if only the right tool existed? Have you then wondered why such an obvious tool is not available? If you answered yes to these questions, chances are you can relate to Donald Russell.

After becoming a dairy farmer in 1995, Russell, an avid reader of scientific papers and journal articles, wondered why the research he was consuming often conflicted with industry practices. “If you look at the studies, cows do not like stalls, but as an industry we’ve just kept [building them], and I really don’t know why,” Russell says.

Based on his personal research and observations during his time as a hoof trimmer and feed consultant, where he witnessed firsthand the impacts of housing cows in barns with concrete floors and stalls, Russell became convinced better housing was possible.

He put this idea into practice and decided to make a change to his own tiestall barn, located in the eastern Ontario community of Cobden. In 2000, he began developing a barn concept to fulfill his vision to optimize cow housing and sustain a healthier, more comfortable herd.

On first instinct, it would be easy to assume a compost-bedded pack barn would meet the criteria put forth by Russell; however, he argues this style of barn has too many flaws. “I knew I didn’t want a pack barn because with the pack barn [clients I worked with], it seemed like they spent a pile of money on straw and shavings, and always had a problem with somatic cell count and [milk hygiene]. It seemed like if they weren’t the best managers, and weren’t spending a lot of money on bedding, they would get problems,” Russell says. He adds, “I love the environment of a pack barn because there are no stalls, but I always saw a big challenge with [milk hygiene] and somatic cell count.” 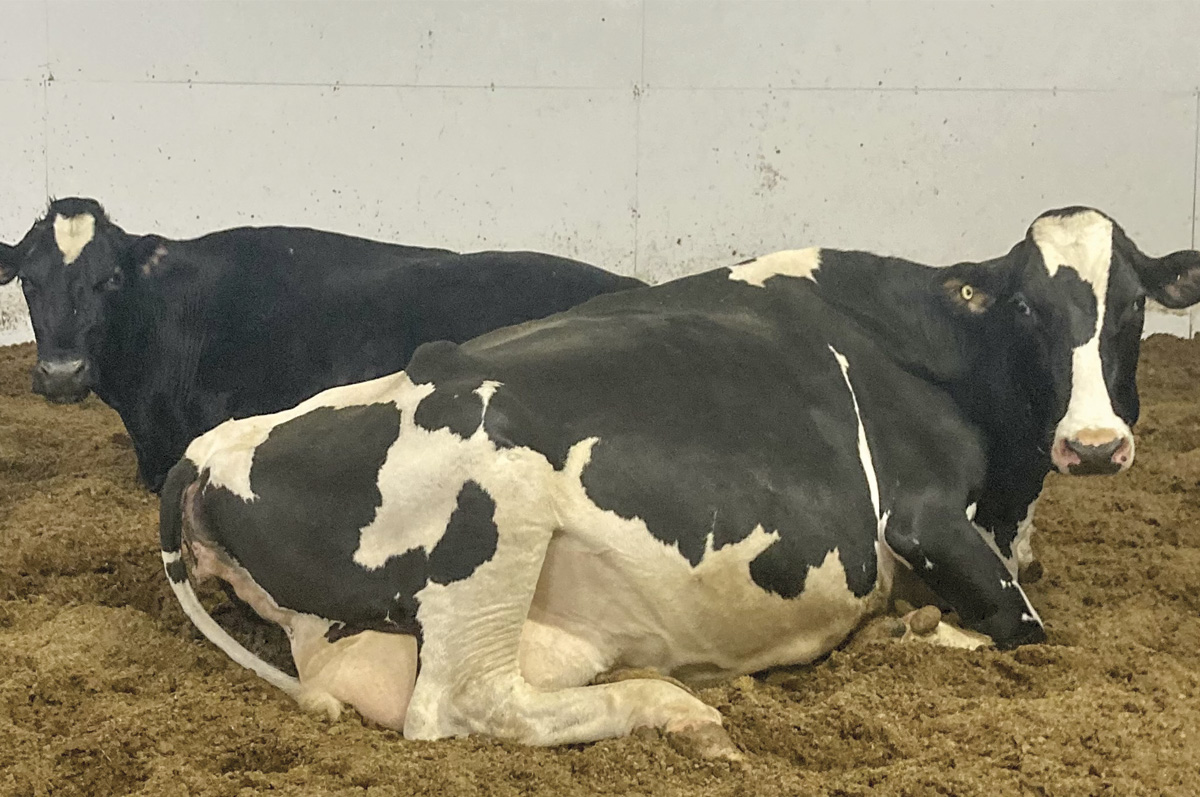 In lieu of a traditional freestall barn or compost-bedded pack barn, Donald Russell chose to design his own stall-free recycled fibre facility and says the environment has yielded remarkable results in herd milk quality and welfare. | Photo provided by Donald Russell

So with a compost-bedded pack barn off the table, Russell set out to design a barn that could meet his unique specifications. “I tried many different things and failed a lot; that’s why it cost so much,” Russell says. He estimates his investment in his barn design concept would be equivalent to building a typical freestall barn with two robots and quota. However, his attitude and drive to perfect a design pushed him forward, despite the costs. “I always tell my kids, learning from your own mistakes is part of life. It’s OK. But learning from other people’s mistakes is a lot better and [given my experience visiting so many other farms] that’s what I was trying to do,” Russell explains.

After reviewing pro and con lists, and a large quantity of published scientific research, Russell built an experimental barn in 2005 to test out different housing styles and scenarios. By 2013, he had settled on the barn environment concept of his current facility and gathered data on milk quality and milk production to compare the outcomes of animals housed in his new concept barn with those housed in the original tiestall facility. In 2018, he was satisfied with the results of the experimental barn and began constructing a permanent structure to house his entire herd.

The resulting barn design is, of course, free of stalls and provides 58 square feet of space per cow. Instead of shavings, the wide-open area where the cows lie down uses 100% recycled fibre materials. Russell says the depth and width of this base is what adds to the uniqueness of his facility. Another key feature that differentiates his barn from other common styles is its foundation. “In most pack barns, they’ll have no cement underneath them, which is not very good for the environment. We use an impermeable base underneath, so there’s no leaking into the environment whatsoever,” he explains.

He milks on a pipeline milking system a with 14-foot-wide alleys to accommodate a robotic milking system in the future. The facility also features tunnel ventilation, which Russell says is cost-effective and efficient.

The results, so far

Over the past few years, both Russell and his herd have acclimatized to Russell’s final barn concept. During this time, Russell has observed several changes in his herd’s behaviour and in many of the metrics he monitors to gauge things like herd health, productivity and animal welfare.

Without stalls, Russell says hock and leg injuries in his animals are negligible, and he now observes his cows engaging in what he refers to as “nesting behaviour” where they move the base beneath them to lie comfortably on their sides, something Russell believes has helped improved somatic cell count (SCC). 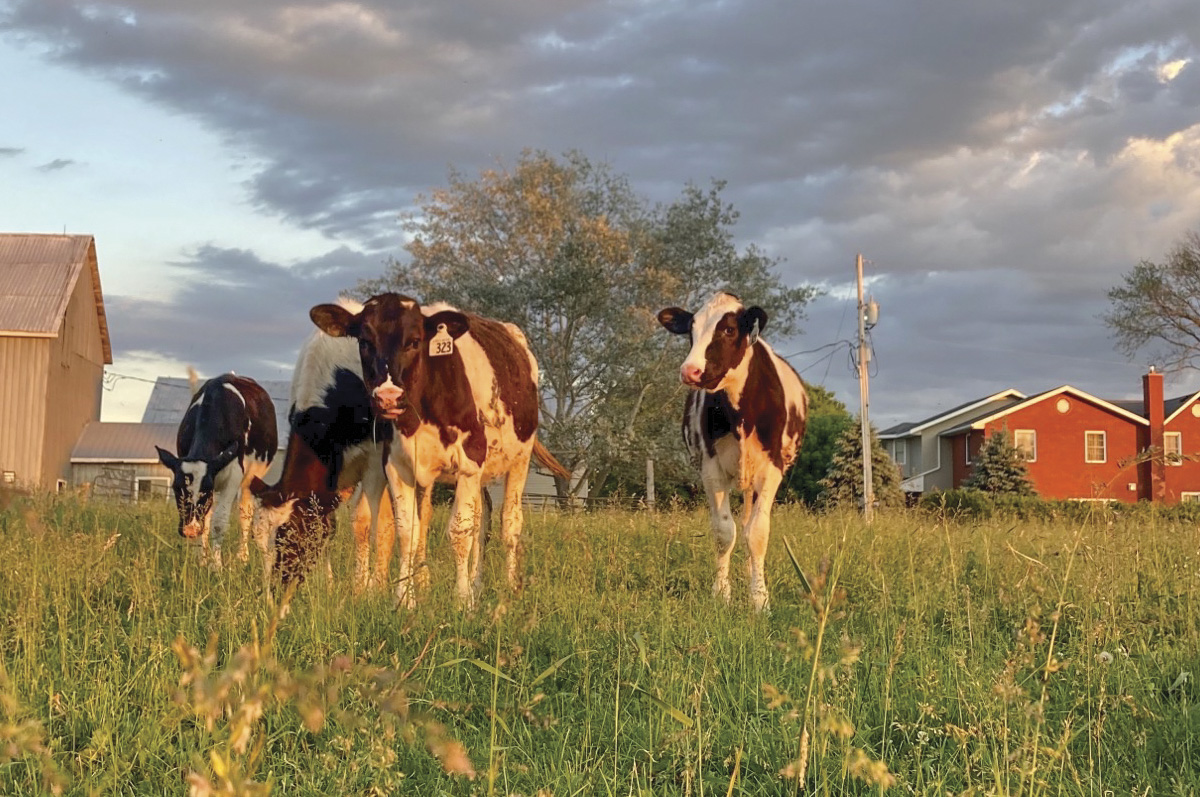 To improve cow comfort and mimic the soft-yielding surface of pasture when his herd is in the barn, Donald Russell built a facility he says provides the ultimate cow environment. Photo provided by Donald Russell

Further improvements to udder health seen in Russell’s patented facility design include improved milk quality and the elimination of the need for mastitis and dry cow treatments. He milks his herd 2X and averages 1.44 to 1.66 kilograms of butterfat production. He has received a perfect score on his past two proAction animal care assessments and observed improved pregnancy rates. Russell says this is because it is now easier to spot animals in heat.

However, Russell’s facility is not without its limitations, and he openly acknowledges this. “Nobody’s perfect. Obviously, I would have done a few things differently,” he admits.

From a cost-saving perspective, Russell says decreasing his ceiling height from 16 to 14 feet would have been superior. He also says he would not have added a slope to the floor, a feature he says provides no advantages.

In his new barn concept, Russell says the biggest challenge lies in keeping the sides of his cows’ legs clean. As in the tiestall – to manage cow cleanliness – Russell combs his animals monthly and recommends long cow brushes for anyone facing a similar challenge.

He holds firm that his unique cow housing facility is optimized to meet the needs of his herd and says the potential benefits of his facility are not limited to the scope of his operation. Encouraged by the environment he has created on his farm, Russell started Pasture Barn Design, a consulting company which offers tours and consultations to other producers interested in emulating the structure and environment he has created for his herd.

Russell joined Dairy Farmers of Canada’s sustainability advisory group and is also collecting data to support the notion that his barn emits significantly fewer methane and ammonia emissions than conventional housing styles. In line with the advisory group’s recommendations on the use of manure separation and composting to achieve reductions in greenhouse gas emissions, Russell practices hourly manure separation. He is currently gathering more data – in cooperation with an independent company – to confirm the volume of emissions reduced by his facility through these practices. Russell says current research indicates these steps can reduce emissions by as much as 75% when compared with traditional freestall housing and suspects his facility is executing these results.

Was it worth the trouble?
Russell’s perseverance to create a barn to meet the specifications he dreamt up was a costly, time-consuming endeavour, but he says it was worth the effort. “I strongly believe if I didn’t do this, I would have been disappointed in myself,” he says. He now hopes to see others follow his lead and adopt a stall-free barn design.