Why aren’t my ‘great ideas’ happening?

Kevin Bernhardt
If I had followed through with various ideas I have had in my lifetime, I would be an owner of a vineyard, bookstore and creamery; have my pilot’s license; have started my family history book; and have a restored 1971 Chevelle Super Sport in my garage.
Kevin Bernhardt

I have had cool strategic ideas over the years, and some have successfully come to fruition, but others met obstacles I did not overcome. I suspect all readers can identify with my history. The question is: Are there management tools that can increase the probability of not letting obstacles get in the way of accomplishing our business goals?

This is the second part of a two-part series on continuous improvement management tools one can use. The first article (“What great idea is lurking in the back of your brain?” in the June 12, 2022 issue of Progressive Dairy) focused on coming up with new fresh ideas. Those tools – brainstorming and nominal group technique – help create the ideas for improving, expanding or changing the trajectory of the business or practices within the business.

However, an idea without implementation is just an idea. This article discusses two tools – fishbone diagram and forcefield analysis – that are processes for assessing the obstacles that might be preventing successful implementation of good ideas.

According to my “Memory Jogger” handbook, fishbone diagram (aka cause and effect diagram) was developed to represent the relationship between some outcome or “effect” and all the possible “causes” influencing that effect. The effect could be a positive or negative; either way, there are causes or influencers.

Figure 1 shows where the name comes from. The desired “effect” is on the right side (fish’s head).

All the “causes” influencing the effect are identified on the left side of the diagram. The left side (fish’s body) starts with major categories (major bones). Major categories are whatever is appropriate for the effect or problem being studied. Typically, there are three to six major categories including, but not limited to: people, equipment, procedures, policies, regulations/laws, materials, environment, measurement, decision-making, communications, facilities, livestock and financing.

Once the major categories have been identified, then the work of finding the root causes begins. The root causes are a line from a major category (small bones). Figure 2 is an example of a fishbone diagram where the desired effect is good financial information that enables informed decision-making. 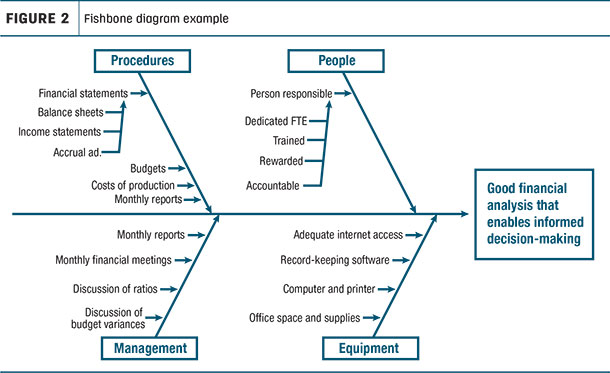 Figure 2 is broken down into four major categories, and root causes of good financial information are identified. Once completed, the next step for managers is to assess the root causes and ensure that the operation has the right procedures, people, management and equipment in place. Causes missing or lacking are potential obstacles preventing a successful outcome and are a place for managers to spend time tomorrow morning after breakfast. The idea is to build a good structure for success, and the desired effects will follow.

Forcefield analysis is one of my favorites, partly because it has a cool name. However, beyond the cool name, forcefield analysis is a recognition that there is a path from where we are today to where we hope to be in the future. There are driving forces that motivate one to stay on that path. However, there are also restraining forces that block the way. If appropriately identified, then staying on the path and accomplishing the goal is a matter of both strengthening the driving forces and/or reducing or eliminating the restraining forces.

Driving and restraining forces include people, resources, policies, regulations, attitudes, financials, skills and much more. Figure 3 illustrates an example of the process. It is a non-farm example but perhaps one many would identify with. 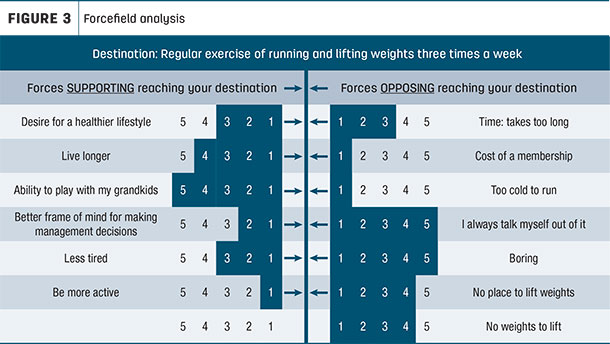 The goal, or destination, is to improve my health by doing a regular exercise program of running and weightlifting at least three days a week.

The first step is to put in writing the goal or destination. A common acronym for writing an effective goal is SMART (specific, measurable, accountable, realistic and timed). The statement written in the example meets all these criteria with possible exception of accountability. Accountability is acknowledging who oversees making sure the goal happens. Perhaps I should put my spouse in charge of that.

The second step is to put in writing in the left column the driving forces, that is those elements that support or motivate achieving the goal. The third step is to assess the strength of the driving forces (1 is low influence and 5 is high). In my case, the ability to roll around and play with my grandkids is a huge motivational factor for me, and living longer is motivational as well.

The next two steps are to do the same, but in the right column, which is identifying the restraining forces preventing goal achievement. In my case, it is my own head that is talking myself out of exercising, and part of that is because I find it boring.

With knowledge of factors either driving or restraining achieving this goal, I can now make management decisions that strengthen the driving forces and reduce or eliminate the restraining forces.

For example, I love to bike, hike, ski and kayak. So I can invest in kayaks, snowshoes, etc., and hit the hills, lakes and streams. Sounds like fun to me, but it’s good exercise too, and I have reduced one of my major restraining forces. If I do these activities with my grandson, then I have likewise strengthened a driving force.

Dairy examples might be improving cow comfort, lowering somatic cell counts (SCCs), decreasing feed waste, improving employee retention and development, or even completing a comprehensive strategic plan. Once the driving and restraining forces along with their influential strength have been identified, then management can work at ways to strengthen the driving forces and reduce/eliminate the restraining forces with focus on those most influential.

Note, in some situations – especially those working with employees or even other owners – strengthening the driving forces can have the result of a counterbalance strengthening of the restraining forces, which you don’t want. Let’s be honest, if family or others attempted to strengthen my driving forces by hammering on me about being healthier and how much better I would feel if I shed a pound or two, I may let my stubbornness rise and, while not meaning to, strengthen my restraining forces. Those who have raised teenagers likely understand this counterbalancing phenomenon quite well.

Your road to achieving big hairy audacious goals (B AGs) may be littered with obstacles, problems or just missing pieces of the puzzle. Perhaps a fishbone diagram will help identify a missing puzzle piece, or a forcefield analysis will help identify the driving and restraining forces. While you might not have a lightsaber to cut your way down the path to success, perhaps you can identify and fix the missing causes, strengthen driving forces or reduce/eliminate restraining forces, all of which will increase your probability of achieving your great ideas.