NASEM nutrient requirements 2021: What is new with fatty acids?

Over the last 20 years, research and the subsequent field application of innovations in dairy cattle nutrition has contributed to greater animal performance and health.

Recently, the Eighth Revised Edition of the Nutrient Requirements of Dairy Cattle (NASEM 2021), which serves as an updated guide for the feeding of dairy cattle, was completed. Here is a closer look at NASEM 2021 regarding the nutrient practically known to the dairy industry as fat.

Fat, more accurately defined as lipids, are any class of organic compounds that are fatty acids or their derivatives. So not unlike the focus on dietary amino acids instead of crude protein (CP), feeding lipids involves focusing on fatty acids as the building blocks of the lipid. Fatty acids are used as energy sources and in important biological activities such as cell and tissue metabolism and function as well as hormonal synthesis and signaling. The statement of task for the NASEM 2021 directed the committee to prepare a report in the form of a comprehensive analysis of the recent research on the amounts of amino acids, lipids, fiber, carbohydrates, minerals, vitamins and water for preweaning, growing, reproducing and lactating dairy cattle.

What aspects of dietary fat should be important to dairy producers and nutritionists? The foundation of the dairy cow’s diet is farm-raised or purchased forages, blended with grains and byproduct ingredients. These ingredients are a significant source of dietary saturated and unsaturated fatty acids (see the fatty acid section on a corn silage nutrient analysis). Since the unsaturated portion of fatty acids from these feeds largely becomes available to the rumen microbial population, the amount and rate of rumen availability can impact cow performance.

The role of the nutritionist during diet formulation involves assembling a formula of feed ingredients that promote health and productive rumen fermentation. NASEM 2021 notes that, in dairy nutrition, we often apply a maximum to the amount of unsaturated fatty acids in lactating diets to prevent the onset of milkfat depression. The authors note three reasons to question this concept. First, providing enough bioactive fatty acids provides the greatest incremental effects at low inclusions. Second, mid-infrared (MIR) milk analysis is a tool that can be used to help manage de novo, mixed and preformed mammary gland synthesis of fatty acids. Finally, the effect of unsaturated fatty acids on milkfat synthesis in the mammary gland happens at a total dietary fatty acid level below 3%. Small changes in the rumen outflow of essential fatty acids could have positive effects on animal health. The authors comment that research on bioactive fatty acids reinforces the need to focus on measuring fatty acid effects independently as opposed to total dietary fatty acid content.

In addition to dietary fatty acids from forages, grains and byproducts, fatty acids can be included in the diet from ingredients that are comprised of unprotected triglycerides or rumen-protected free fatty acids. The inclusion of supplemental fat can favorably increase the energy density of diets, increase the absorption of fat-soluble nutrients and provide essential fatty acids that would otherwise be deficient.

The authors of NASEM 2021 note that over the past two decades a substantial database of fatty acid digestibility was developed that allows for better estimation of the true digestibility of fatty acids. The nutrient composition tables that were in NRC 2001 have been updated to include amino acids, total fatty acids and some of the individual fatty acids of feed ingredients.

Additionally, NASEM 2021 provides a total-tract digestibility coefficient for an expanded range of ingredient types. These diet inclusions have a considerable range of digestibility, as demonstrated in Table 1. 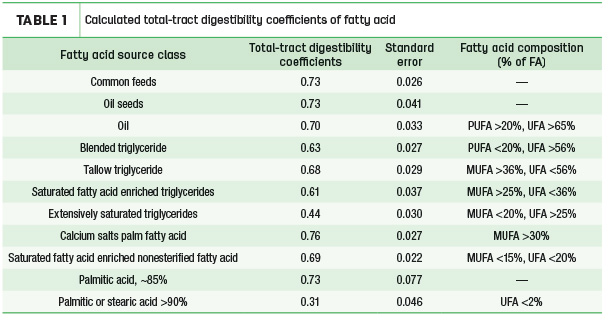 The best fatty acid source class for digestibility was the calcium salt of palm fatty acids. This bypass fat category provides the highest amount of post-rumen-delivered oleic acid. Oleic acid (C18:1c) was cited for its contribution to emulsification and micelle formation, which increased energy transfer through absorption to the cow.

NASEM 2021 also emphasizes that the digestibility of supplemental fat decreases as additional increments of fat are added to diets. Therefore, it is important to consider the type and quantity of supplemental fat being used in the diet. Accounting for dietary fat as well as including supplemental fat can favorably increase energy density of diets, increase the absorption of fat-soluble nutrients and provide essential fatty acids that would otherwise be deficient.

NASEM 2021 provides a more extensive section on the topic of dietary interventions and reproductive impact. It takes enough metabolizable energy (ME) and biologically essential fatty acids to have successful reproductive functions. Early-lactation cattle in negative energy balance can be in a non-cycling reproductive status in part because milk production takes precedence for ME available, so cows will not cycle.

Several biological mechanisms have been identified that link feeding fatty acids to these positive reproductive responses, which include improving energy status during early lactation, enhancing follicle development, changing insulin status and progesterone synthesis, as well as modification of the production and release of prostaglandin F2-alpha. Feeding supplemental fatty acids was noted for increasing follicle numbers and the size of the dominant follicle. Research on the omega-3 to omega-6 ratio of the diet and achieving a dietary balance of these two essential fatty acids could benefit reproductive performance. Because of the scarcity of rumen outflow of omega-3, supplementing omega-3-rich fatty acids in the diet to favorably influence various reproductive processes and overall reproduction was also cited.

A meta-analysis was referenced stating that changes in fatty acid nutrition improve gross reproductive performance. The recommendations indicate measuring fatty acids independently and modifying the amounts and profile of fatty acids in the diet. The authors do note that large numbers of animals are required to arrive at the most accurate estimates of gross reproductive performance. The variation between cows was cited as an inherent challenge to statistics.

Rumen fermentation is a fantastic process that generates microbial protein and volatile fatty acids (VFAs) from ruminant upcycling of byproduct from other systems. The conversion of digestible energy to ME is measured by the production of nitrogen and methane. Methane is an unavoidable outcome of fermentation which increases as dry matter intake (DMI) increases. Dietary fatty acids have a positive impact on reducing enteric methane emissions and influence the increase of efficiency of all nutrients in the diet.

The NASEM 2021 includes an updated equation for predicting enteric methane emissions calculated on DMI, in addition to fatty acids and digestible neutral detergent fiber on a dry matter basis. Balancing the dietary inclusion of individual fatty acids in dairy nutrition will be a part of increasing feed efficiencies as the dairy industry addresses environmental footprint questions.

Next steps through human research

Milk contains over 400 fatty acids, although many are in trace amounts. Consumers of dairy products obtain bioactive fatty acids that have potent biological effects. These bioactive trace fatty acids in milk have been linked to positive human health benefits. Branched-chain fatty acids in milk are mostly derived from microbial sources but still require research to better understand their mode of action. CLA and omega-3 from alpha linolenic acid are also present in milk. As research identifies the difference between plant source and animal source trans fats in human diets, we will have a better understanding of the bioactive nature of these fatty acids in all mammals, which could provide more insight in the feeding of fatty acids to dairy cattle.

With the NASEM 2021 report, the dairy industry has an increased understanding of rumen-available fatty acids in feedstuffs, as well as the role that supplemental bypass fatty acids have on absorption, efficiency, milk production and reproduction. With today’s economics of high-cost inputs both in crop production and feed, it is wise to evaluate and adjust both the rumen and post-rumen supply of saturated and unsaturated fatty acids to support dairy cattle health and performance.