What’s in your bulk tank?

Bulk tank testing is a powerful monitoring tool that enables producers to make the best management decisions possible, by placing knowledge of their herd health into their hands.

Nearly everyone in the dairy realm, from consultants to veterinarians to producers, has found themselves in a discussion regarding bulk tank milk quality at least once in their career. This is of little surprise, considering that the quantity and quality of bulk tank milk ultimately determines what the producer will see on his or her mailbox check.

Dairy professionals want to help producers in achieving optimal quality and production; they will need to be aware of the variety of types of tests and how they can be used effectively. Bulk tank cultures may be quantitative or qualitative, and familiarity with differences between tests and their corresponding results is key to understanding how to troubleshoot and manage elevated counts. When used appropriately, the bulk tank tests are one of the most useful tools to help with udder health and milk quality.

Quantitative bulk tank tests are the most frequently used method of monitoring milk quality at the farm level and are intended to give an accurate measurement of bacteria per milliliter of milk, but do not provide identification. These tests are part of regulatory testing, performed using standardized methodology and in compliance with Pasteurized Milk Ordinance (PMO) requirements, in all certified milk labs across the country. Every dairy producer must meet standards for somatic cell count (SCC) and standard plate count (SPC) to ship milk as part of the Grade “A” market – and as such, it is these tests which are most familiar.

Nearly all producers have an appreciation for SCCs, at least in the sense that low numbers are “good” and high numbers indicate mastitis problems in the herd. What may be less clear is the impact infected quarters also have on the SPC. A common misperception is that high bacteria counts automatically indicate cleanliness issues: dirty cows, poor milking time preparation and dirty pipelines. While this can absolutely be the case, infected quarters are also capable of being tremendous drivers of high bacteria counts. A single infected quarter is capable of shedding bacteria in the tens of thousands or even millions of cells per milliliter of milk.

These high-shedding phases of the infection will not last indefinitely, as it is unsustainable with life for the cow to tolerate these high bacteria levels. The cow will need to use her immune mechanisms to fight the bacterial growth to survive the infection, so counts will drop. This pattern of seemingly random spikes in bulk tank SCC and SPC is common and a source of much frustration to producers when the source of the bacteria is unknown. If high bacterial counts are occurring because of mastitis organisms from infected quarters, no amount of cleaning the pipeline will alleviate the issue.

While bulk tank testing for SCC and SPC is required of all producers, individual milk processors often require additional quantitative bacterial tests, such as lab pasteurized count (LPC), preliminary incubation count (PIC) and total coliform count (TC). Because these tests are not required and not used ubiquitously, they may not be well understood. In contrast to SPC and SCC, these counts are rarely indicators of infected quarters and nearly always a symptom of a cleaning or environmental quality problem.

Diagnosing the cause of high counts from these types of quality tests often requires a complex investigation of environmental sources, such as water quality, evaluation of milking routine practices and equipment wash-up analysis. So how can producers and professionals alike troubleshoot these different counts and make better management decisions? The key is to identify the causative organism driving the high counts.

Qualitative bulk tank culture delivers bacterial identification, along with a relative differential count of the organism classes present in the sample. A good comprehensive bulk tank culture can ideally detect and give names to all the important bacteria present in a bulk tank milk sample, with particular emphasis on sensitive detection of contagious mastitis pathogens. This complex level of detection requires use of multiple selective agars, enhancement methods and molecular confirmation of some bacterial species, which is beyond the scope of many laboratories. Growth from a single inoculation of milk on blood agar, while sufficient for cow samples, will yield very poor detection results on bulk tank milk.

Bulk tank culture test methods are not a regulated procedure, and an important point to appreciate is: Test results will likely be different between laboratories. Required processor testing follows rigid standardized protocols, from the time the sample is collected to the reported result, in an attempt to control each step of the process and deliver uniform results from one lab to the next. Bulk tank cultures protocols vary widely between laboratories as far as sophistication and detection capacity, which makes comparison of results virtually impossible. This can create confusion and risk for producers if important mastitis pathogens are misidentified or remain undetected in the herd.

What do I need to know? 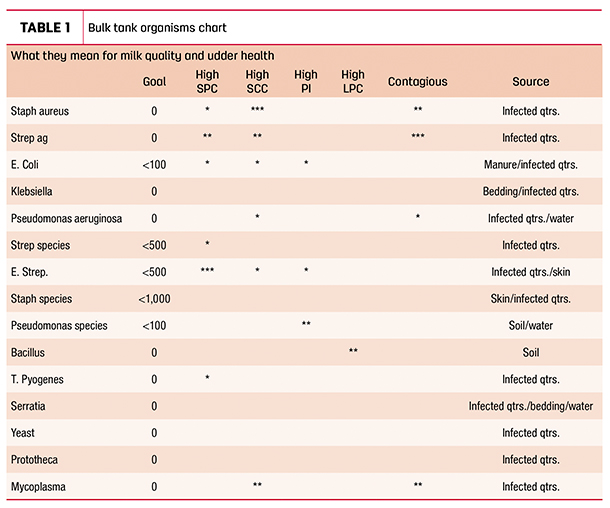 We know the bacterial population in the bulk tank may come from infected quarters or from some external source such as teat skin, water, soil or equipment. While some organisms originate either from the cow or the environment, others will only be found in one or the other. Having a broad understanding of different bacterial categories and the tests which they correspond to is necessary for management of these counts.

Contagious pathogens: Staphylococcus aureus, mycoplasma, Streptococcus agalactiae and prototheca are the primary mastitis pathogens known for cow-to-cow transmission, usually via mastitic milk residue on milking inflations from infected quarters, although spread may occur on human hands, infusion cannulas or other objects coming into contact with teats.

Most of these contagious pathogens will only want to live in the udder and they have poor survival outside of the cow. The exception is with prototheca, which can thrive in the environment as well as inside the udder. Presence of any of these four pathogens in the bulk tank does mean that mastitis milk from infected cows is going into the line. Detection should motivate a search for infected individuals, as their continued presence will lead to increased SCC, SPC and abnormal milk.

Streptococci.
Environmental streptococci and other strep-like organisms (enterococcus, lactococcus) are well known for growing in extremely high numbers. In smaller herds, even a single infected cow being milked into the tank may shed enough bacteria to cause the entire bulk counts to be above the required standards. It can happen in larger herds, as there may be multiple infected cows in a high shedding phase. Strep organisms may be transmitted from cow to cow in a contagious manner due to the sheer number of bacteria being shed. These bacteria frequently originate from infected quarters but may also originate from environmental sources, such as bedding or teat skin.

Insufficient cleaning of dirty udders and teats may result in high SPC counts from the tank, even if infected quarters are not a contributing factor. Staph colonies (non-aureus) are also found abundantly on teat skin and udders, which easily allows them to end up in the bulk tank or as a cause of mastitis.

Environmental organisms.
Pseudomonas and bacillus species are two non-pathogenic bacteria which exist readily in the environment and can be responsible for high PIC and LPC counts, respectively. On rare occasion, serratia, Pseudomonas aeruginosa or candida (yeast) may be detected in the tank. These organisms will come from an environmental source, usually water, but may be transmitted to the cow and cause mastitis. While uncommon, these pathogens can be very damaging to both quality counts and animal health in a short period of time. If detected in the tank, an exploration for the source should take place immediately.

Escherichia coli and Klebsiella bacteria (commonly called “coliforms”) are ever-present in manure, bedding and sometimes contaminate water supply on the dairy. Mastitis as a result of coliform infection is often acute with severely abnormal milk, and problem cows are more quickly identified and moved to a hospital pen. As a result, infected cows can be a less common cause of elevated counts. Nevertheless, quality standards continue to rise, and more processors are requiring a TC test. Poor milking procedures and dirty cows may lead to elevated TC counts.

BVD A final consideration for bulk tank milk samples is screening for bovine viral diarrhea (BVD) within the herd. Prevalence of BVD in adult dairy cows is low, as vaccination programs are widely used and are effective in preventing severe disease. The virus continues to cause health risks for many, due to the “persistently infected (PI) animal” problem. Screening tests to find these PI animals usually takes place in calves. Despite these prevention efforts, infected animals still slip through and end up in the milking herd. These PI animals may not appear “sick” but will continue to shed tremendous amounts of virus throughout their life. Herdmates that encounter them will likely experience transient infections and, if pregnant, may experience abortions or fetal deformities. Screening for presence of the BVD virus at the bulk tank level is an economical and efficient way of ensuring these troublemakers stay out of the milking herd.

Bulk tank testing is an immensely powerful monitoring tool that empowers producers to make the best management decisions possible, by placing knowledge of their herd health picture into their hands. Every producer should consider doing tank cultures at least once per month and regularly reviewing results with a consultant or their veterinarian. Assuming you don’t have contagious mastitis or other dangerous pathogens in your tank, by not looking for them, does not mean they are not there. Remember, “you don’t know what you don’t know.”