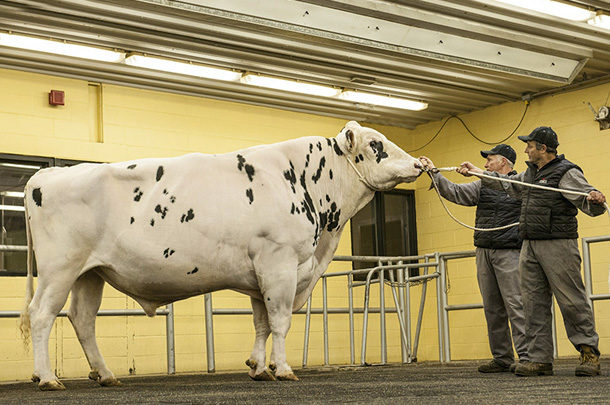 Jaclyn Krymowski
No matter how you look at it – genetics, efficiency or production – the national Holstein herd is a piece of artistry, something breeders of today and yesteryear can be proud of.
Jaclyn Krymowski

Just as praiseworthy is the road that led to the type of animals we have today, especially the influential sires who molded many of the breed’s high standards in the 2020s. The 2010s marked a decade of many exceptional bulls that made a ripple effect through the following years. According to Tom Lawlor, director of research and development at Holstein Association, the bulls from this era tended to sire daughters that were high producing and trouble free. At the time, farmers were looking for traits from bulls with the right combination of production, health, fertility and conformation, particularly good udders, with the feet and legs that kept the cow in the herd longer. This is the era where the productive life trait cemented its importance and acceptance in the industry.

An era of standouts

It’s no surprise that the 2010s saw a slew of genetic excellence – remember that this was the first full decade in which genomics was widely utilized to drive breeding decisions and sire selection. “Bulls from this era, such as Supersire, Mogul and Numero Uno, were some of the first bulls to be used more heavily based upon their early genomic predictions,” explains Lawlor. “Shortly thereafter, their daughters validated that information. Since then … the world of breeding has been changed forever. While the number of farmers who are engaged in producing elite genetics has decreased, we now see genetic information being used by a larger segment of our industry.” Some of the bulls that took centerstage in this decade are backed by standouts from the previous era. For example, Select Sires’ elite Supersire has pedigree traces from sires such as Planet, Oman, Blitz and Elton. Semex’s Mainstream Manifold is also a standout Oman son.

After the first genomic evaluations were published in the Holstein breed in 2008, cattle breeding and semen marketing changed significantly. In this decade, companies like Select Sires saw dairies start to buy the majority of their semen from young genomic bulls. “This led to rapid genetic progress in the national dairy herd. This also enables a bull to have a longer ‘selling career’,” explains Mark Kerndt, Aggressive Reproductive Technologies (ART) program manager for Select Sires. “Supersire enjoyed such a career, ranking as an elite genomic young bull and with daughters milking now worldwide; he established himself as one of the great bulls in breed history with over a million units of semen sold.”

Mike West, Semex’s product development specialist, discussed how Mainstream Manifold, one of their 2010s standouts, was not used heavily as a sire of sons, but his legacy is heavily carried out through his daughters. “His daughters are positive contributors to milk and components, and [they] produced daughters that [are] healthy and profitable all lactation,” says West. “We see his daughters passing these traits down through their offspring to future generations and adding to the overall health and profitability of the herd.”

Early genomic evaluation was responsible for identifying some of the hotly used sires. In the case of Supersire, he was used to build pedigrees all over the world for dairymen and studs. Kerndt notes that many of the elite males and females in the Holstein breed today will trace him back deep in their pedigree. In fact, the current No. 1-ranking genomic young bull in the current lineup has five crosses to Supersire in his pedigree. “Supersire as a sire has contributed profitable cows that produce large quantities of milk, butterfat and protein,” says Kerndt. “These same cows exhibit good strength and width throughout their frames, allowing them to thrive in all types of environments.”

Mainstream Manifold got his start in a similar way – he received his first official proof in 2009 and debuted as the No. 20 Total Performance Index (TPI) sire. He continued to sell for Semex until he passed on in 2018 with lifetime sales at over 1.6 million doses in his lifetime. “Manifold changed the way many looked at this profile of a bull,” adds West. “Not only was he able to produce healthy cows, he produced cows that had the quality of mammary systems and balance that we strive for in the breed.”

Something every successful industry has in common is listening to its customers, Lawlor observes. Many individuals in the Holstein world have done just that in helping breed and identify some of the breed’s most influential bulls. “The dairy industry is blessed to have lots of breeders who are passionate about what they are doing and are willing to take a critical look at their cows,” he says. “Farmers saw [that cows] who would produce a lot of milk, breed back easily, stay healthy and had good mobility with trouble-free udders were the ones that were staying in the herd longer and making them more money.”

Jaclyn Krymowski is a freelancer based in Ohio.