Laura Wise
It’s not uncommon for purchased feed costs to equal 50% of a dairy farm’s budget. Nearly 20 years ago, Jon Bansen of Double J Jerseys near Monmouth, Oregon, was in the same boat.
Laura Wise

“We’d taken an operating loan out to buy alfalfa for winter feed. I knew that if we ever wanted to get out of debt and create the opportunity for the next generation to come back to a thriving business that things had to change,” Bansen says.

And change he did. Today, the 650-acre grassland farm supports 175 Jersey cows and 125 head of youngstock replacements, and only 10% of the farm’s costs are attributed to feed. “Where we used to be buying 14 loads of alfalfa every year, we are now buying five. Aside from 2 pounds of carrot pulp the cows receive to encourage them into the milking parlor, everything else is homegrown forage,” says Bansen.

A co-op member of Organic Valley on their grass-fed program, the herd’s 305-day yield average is 13,558 pounds at 5.39% butterfat (792 pounds) and 3.85% protein. Back when the cows were receiving 20 to 21 pounds of grain, the herd average was heading toward 20,000 pounds of milk per year and 1,000 pounds of butterfat. According to Bansen, chasing milk quality and grass-fed bonuses, while swapping the drop in production for a drop in feed costs, has resulted in a much more profitable system. “We’re not looking for the ultimate amount of milk out of our cows – we’re looking for the optimum amount of milk out of our cows,” Bansen says.

The key to making this all stack up – pushing grazing as far as possible. While the sweet spot for making money is to have 50% of all feed consumed as grazed forage, Bansen has pushed it even further with 90% of feed coming from grazed forage for six months of the season and the early and later edges sitting at 60%. Achieving this has been through the development of a robust grazing platform that extends the grazing season from mid-March to late November, providing cows with enough forage to be on par with a high feed input system.

“Cows are grazed on a 30-day rotation, receiving a fresh piece every 12 hours. We used to be on a 14-day rotation that kept tight covers, which makes for rocket-fuel forage, but we found it was killing our grass stands off earlier, which resulted in more purchased feed costs,” says Bansen. Contrary to typical intensive rotational grazing, at least 5 inches of covers remain in the fields, which Bansen says is integral to supporting soil health and locking in moisture. 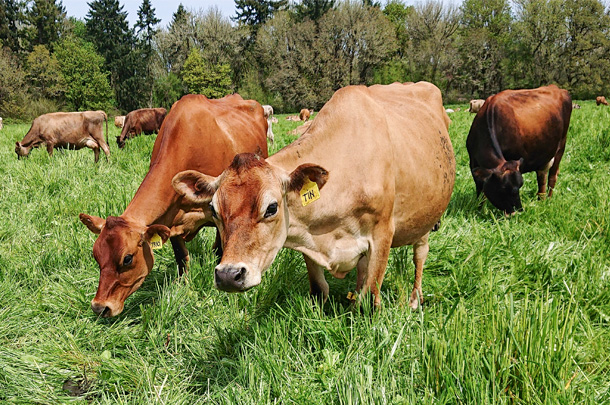 To allow grass to mature while still retaining quality, Bansen has started utilizing mixtures with upward of 10 different species with grasses, forbs, herbs and legumes. According to Jerry Hall, director of research for Go Seed who works with Bansen to select varieties of species to fit his herd and environmental needs, the right mixture can maximize productivity across the field for the entire year. “In the case of pasture mixes, we have to consider seasonal growth fluctuations as well as soil variances. We also must consider the nutritional qualities throughout the year,” Hall says. “It is also important to make sure the species are compatible with each other, as some species will work against each other, and the combined output will be less than that of a single component.”

Because he wants grass that is active in the hotter part of the season, the base of his mixtures is a high-sugar ryegrass variety, balanced with orchardgrass and timothy that performs well in the longer rotations. To add root diversity, plantain and chicory are included. For a natural kick of nitrogen and an increase in feed quality, mixtures include later-maturing varieties of balansa and berseem clover. The balansa clover used is an excellent user of excess phosphorus, can produce more than 100 pounds of nitrogen per acre and features high amounts of biomass with crude protein upward of 28%.

Bansen credits the combination of plant diversity and leaving longer covers in his ability to lengthen the grazing season and reduce irrigated water needs by two weeks on either side of the season. “You can’t decouple the two components and still get the same outcome. The longer covers prevent soil from getting too hot in the summer. This drives microbe activity, which makes for healthier soils and longer root systems, which retain more water – the whole system builds on itself,” he says. “We’re also seeing earlier grass growth in the spring due to biological activity waking up earlier and generating heat.”

Pushing 30 years in the dairy business and looking toward retirement, Bansen has accomplished his goal of providing his children with the opportunity to farm a financial and environmentally sustainable business. His oldest son, Ross, has been part of the business for eight years, and his youngest son, Kaj, has recently returned after graduating college.

For fellow producers wanting to create similar resilience into their farms, Bansen offers the following advice: “Observe your system with an open mind and change it accordingly. If you work with the biology of the grasses and the cows, you will come out so far ahead. And if you think you’re going to drive that ship, you are wrong. If we can work with a biologically healthy system – we will come out the winners on our farm and for our planet.”

PHOTO 1: In 20 years, Jon Bansen has slashed his dairy farm’s purchased feed costs from 50% of the annual budget to just 10%. Adapting his grazing system to work with soil biology has been a driving component to achieving this.

PHOTO 2: Jon Bansen’s mixtures have been developed to maximize productivity across the field for the entire year. High-sugar ryegrass performs well during the heat of the season while balansa and berseem clovers maintain feed quality as grasses mature.

PHOTO 3: Leaving long covers and extending the rotation from 14 days to 30 days has allowed Jon Bansen of Double J Jerseys to increase the amount of grazed feed on his organic dairy farm and reduce irrigated water pressure by two weeks on either side of the season. Photos provided by Laura Wise.

Laura Wise is a freelance writer.

Commercial mixes are a good starting point, but they will likely require some alteration to optimize results for one’s pasture.

“For example, wetter soils will require different rates than well-drained soil, and trying to amend soil uniformity is a good way to break the bank,” says Jerry Hall.

Also, consider the density of the components. Coating applied to the seed can help balance the density, reducing the likelihood of settling. Minimize the amount of seed in the drill and fill it up more often to decrease the risk of separation of components in the mix.