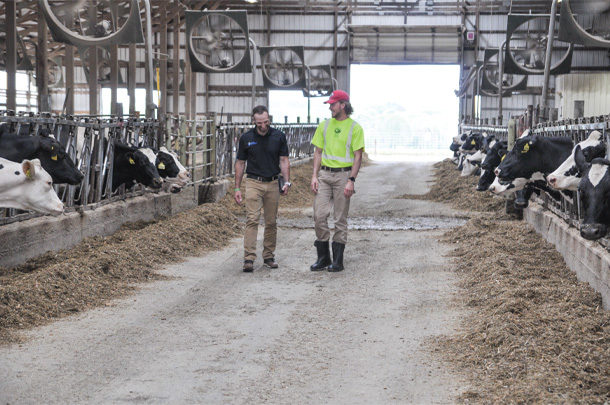 John Goeser (left) and Jordan Matthews have worked closely on a variety of trial projects over the past several years.

Forage testing for the future

Rosy-Lane Holsteins in Watertown, Wisconsin, is part of a project by Rock River Laboratory called the data-driven program. In this program, forage testing is implemented on a much more frequent basis than usual so feed adjustments can be made in a timelier manner.

“We thought of all the things we monitor on the dairy,” says Jordan Matthews, a partner of Rosy-Lane Holsteins. “We look at milk weights of a cow three times a day. We are monitoring activity on the cow every hour and combining all these data points to better manage that cow.”

With this in mind, is the status quo of forage testing once or twice a month enough? The traditional way of thinking is generally that once you put feed up in the bunker, the feed should be consistent throughout.

“That wasn’t exactly our logic,” says Matthews, “but we were pretty intrigued to test that theory.”

Matthews says the idea of making forage decisions based off a series of data points throughout the month seemed more logical than basing decisions from one test that had been taken and fed from the bunker as distant as two weeks before receiving results.

Currently, Rosy-Lane is collecting these data points in forage tests three times a week. Typically, on Monday, Wednesday and Friday. Their current timeline from testing to results is to ensure the samples are to the lab before noon on testing day, and their nutritionist should have the results by that evening so he can see the readings on the feed knocked down from the bunker and fed that day. The shorter timeline allows for a faster reaction to any surprising findings in the sample.

In addition to the timeline change, Matthews says it has changed their tie to their nutritionist. They have trained staff on hand to take the samples three times a week, so while their nutritionist used to spend time taking samples and sending them off, he now serves as more a consultative role for the operation and has had to adapt his workflow to handle the more frequent tests.

“He used to take samples on a Monday and prepare for around an hour of mixing rations on Thursday after the results were back,” says Matthews. “Now he’s basically just got to be prepared to make a switch whenever because he’s getting three data points a week from us.”

Matthews sees the program as a way to help aid his nutritionist into more well-informed decisions and in no way a replacement of the advisement he offers.

Rosy-Lane went through a trial of around six months of sending their samples in three times a week, as well as still using their old system so they could take the time to compare data points and learn the new system. During that time, they learned the subtle differences between the data points and developed a range on where they were comfortable with each number being before they decided to implement changes. They also learned to follow overall trends in the samples to see what caused the variations in results.

Matthews also says that the biggest change they underwent with adapting this new program was the change of mindset that accompanies the idea of always being on their toes and ready to mix things up.

Rosy-Lane was up for the challenge because of their willingness to gather those numbers to become better stewards.

“We want to have returns,” says Matthews. “To our business so that we can fund a future, and then you move on to be productive stewards of the land and take care of our natural resources that we have the ability to farm and, again, be here in the future. Our mission is great people, great cows and great returns.”

Although it is difficult to put an exact number on the worth of this new system, Matthews says he feels confident that it has contributed to their mission. The change of being able to modify feed rations more frequently and use ingredients more effectively is definitely a positive. For now, their team is comfortable with the amount of data being received and has no plans to change it, but with their current system the possibility of having almost instant readings on what is being fed is not too far off.