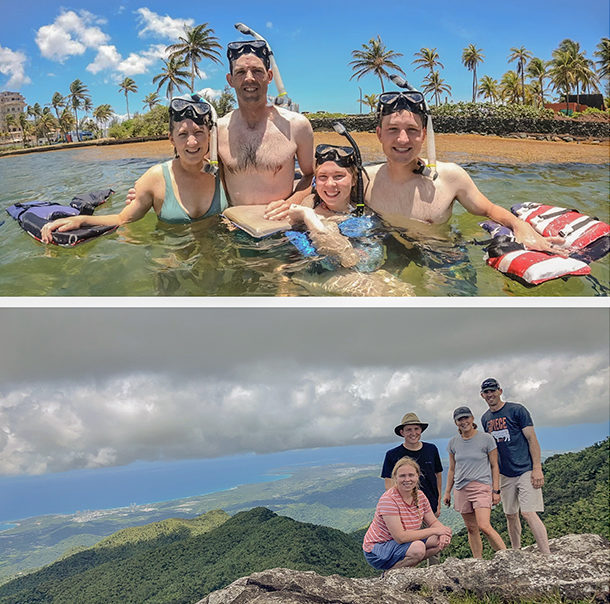 Earlier this week, I returned from a weeklong excursion to Puerto Rico. My husband and I framed it as a celebration of our 10-year anniversary, which occurred two years ago in the grips of COVID-19.

Really though, it was a trip my brother and his wife planned and asked if we wanted to go along. Heck yes, we did. We had a blast, but if the phrase “you can take the boy (or girl) off the farm, but you can’t take the farm out of the boy” applies, it was on this trip.

My brother Nate said if he revisited the island, he’d rent a motorcycle and road trip the island and not skip the places at the center of the island, away from the beaches. He wanted to see their farms and the kind of equipment they used. Was the equipment old or modern? Did they have corporate farms, like in Hawaii? Or was it small plots of land farmed by a single family?

As we drove on the outskirts of San Juan, my husband, Craig, watched for animals. On the first day, he spotted a horse tied up on a tennis court next to the autopista [expressway]. For the rest of the week, we spied horses everywhere except where we expected them to be: grazing in traffic medians, tied to pare [stop] signs and wandering in alleyways. He also spent a week on the lookout for cattle. Whenever we ventured out of the city, he’d browse the hillsides. On the last day, he found four Brahman cows, shoulder deep in the tropical grass. Sure, they were different than our English breeds, but they were no different than the hundreds of Brahmas he’d seen in Florida and Texas.

My turn came during the food tour, which was a highlight of the trip. Food is literally the product of agriculture, so how could I not be excited? Our first stop was for coffee (the main Puerto Rican crop during the plantation era) and guava (indigenous to Puerto Rico) pastries – then it was pasteles and mofongo, both made from an island staple: plantains. Plantains are not native to Puerto Rico but came by way of the slave trade from Africa and are now the second most important crop grown on the island, behind coffee beans. I could go on with the rice and beans, the pina colada (invented in Puerto Rico, by the way) and the yucca tuber, but I’m nearing my word count. At first, the tour guide was not offering up all the details he knew, but after a few dozen questions, he got my number.

For my sister-in-law Makayla it was all about the chickens. She is a first grade teacher, and this spring, she raised chicks in her classroom, so she knows and loves her birds. Chickens on the mainland, especially on the outlying island of Culebra, are practically endemic. With almost no predators and winters so mild they are nonexistent, the hens and their little hatchlings roam the countryside and the beaches with only one care in the world: the tourists’ carefully packed lunches. For us, the chickens, the iguana (an invasive species) and the feral cats were the animals of Puerto Rico.

Yet, after all that, the thing that exposed our inner farm girl and farm boy the most was our farmer tans. White, creamy bellies, chests and legs on the beautiful Flamenco Beach were a dead giveaway of our farming origins. Today, a few days post-island, the previous white parts of our farmer tan are red and peeling. It was a fantastic trip, but the next time we are on the island, we are taking a day to visit the farms.