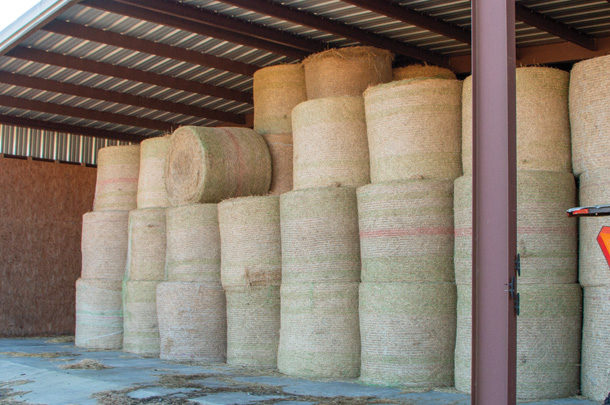 The challenges of finding feed

Ian Gallacher
I’ve had calls from two friends lately. “We’re out of hay, I don’t know what to do, can you help us?”
Ian Gallacher

These are farmers who’ve been dairying their whole lives, just like their dads. Is this the end – the end of culture and family on the farm? Farming communities that were once a series of farms and homes have now become food deserts sprayed with chemicals to grow what we can’t eat until it’s been trucked, processed and displayed in a package.

We all know how this goes. Consolidation is efficient and requires more capital than most family farms have.

Our CAFO rep covers our dairy and others like it – small, family-run, selling to a co-op, all on truck routes, each truck delivering to a milk plant – but he also handles a 30,000-cow dairy. “Everything is clean and everything in good order. They grow all of their feed, generate much of their own energy for machinery and have manpower to handle it all,” he says.

That dairy embodies capital-bought efficiency that can be used to produce a product at a price smaller farms can’t compete with.

What can we do? The economic outcomes are driving money to act. Supply chain problems and climate change-affected drought have driven feed costs up for farmers who aren’t growing all of their feed. Yeah, that’s most of us. Trucking costs rise more and more as diesel and road taxes go up, and the time drivers can spend on the road earning has gone down.

It’s tough to find drivers. According to a friend who runs a trucking outfit, they had 12 drivers a year ago. Demand for trucking has gone up, but now they have four. “I think it’s COVID, couple got sick, but a few more got depressed with what’s going on and got on the booze. We had to let them go. Another guy fell off his mom’s roof, and we had one quit.”

Milk companies are competing in ever-tightening markets. They can’t afford to run one truck to five locations to pick up milk when they can go to one location and fill the truck and drive that to the plant. When was the last time your farm saw an increase in pay price but diesel went up?

The economics of those choices today are beyond the budget of many small dairies – small dairies having to compete with ever-lower milk prices and ever-higher diesel, repair, labor and feed costs. Organic markets are particularly bad, with on-farm milk prices that haven’t gone up in five years.

This year, drought pressure on the West Coast at least has been brutal. We have a friend with a farm near Klamath Falls, and they grow alfalfa there to bring to the Willamette Valley for their cows. “We usually put up 2,000 tons, but this year we had no water and couldn’t put up any.” They’re organic. At $280 a ton, that’s a $560,000 loss, before trucking costs. Today, our friends on the West Coast in organic production without hay are looking at feed of inferior quality that’s going as high as $400 per ton delivered. “I just paid 12,000 dollars for a truckload of RFV 170 hay, but I can’t afford more than 8,000 dollars,” said a friend at lunch the other day.

Guys are tapped out.

Other friends have had hay lined up only to find it sold from under them with two days’ notice because someone else could pay more and pay in cash rather than need a milk assignment. And then there’s the “lower than it tested” feed that somehow arrived at another friend’s farm being held up by lack of trucking for 10 days. What could they do? Send it back? Ask for a discount? Of course not. They needed the feed. In fact, it was an answer to prayer.

I’m writing this in January. We’re months from seeing more hay available. What are farmers going to do?

Statistically, dairy closures nationwide have continued; it’s a steady down curve of the number of farms. Yet, aside from dips like we’re seeing now with limited feed, milk production has continued to increase. The number of dairy farms for sale on the market now is astounding. And it’s not just the 50- to 200-cow small farms. Last year, we saw 400- to 600-cow farms take a culling. Right now on the West Coast, there are 1,100- to 3,000-cow farms listed for sale at prices like $11.5 million and $15 million. But how can those farms sell?

We may see more farm closures in bankruptcy sales. A realtor I spoke with said, “In some cases, the money for those larger dairies will come from investors; they’re buying up big tracts of land now. Someone who had a big farm in California and wants to move that money into a tax shelter rather than pay capital gains after the sale of their other farm.” But the dairy will go away, and the milk demand will be met by someone along the trucking route.

We hear, “We need a higher pay price,” but we see more small and mid-sized dairies closing, ongoing shortages in trucking and inflation on the rise with predictions of interest rate increases for 2022. All this amid higher drought-driven and import-driven feed costs, and an increasingly competitive national and international market for milk. There are more large dairies opening. And our food security and food choices are shrinking.

In 2021, in northern Washington and southern British Columbia, a combination of past forest fires and land clearing and atmospheric rivers created flooding that closed highways and stopped trucks running for weeks, trucks that move food. When roads are open, 4,000 trucks a day move through the lower mainland of British Columbia to bring food and other supplies to those regions that don’t grow their food. What happens when the regional plant can’t be reached by the trucks from the regional big farm? It seems thin, but it can happen, as we saw in 2021.

When food is easy – easy to get, easy to eat – we consume more, more than we need, and the economy loves it. Business thrives as we get fat. But do families thrive?

Because of COVID-19, we’ve seen a move to remote work. Remote work lets workers live where they can own some land, grow some food and spend time with their kids rather than their car. Carbon emissions go down. Salaries can go down, company office costs can go down, and yet in both cases the standard of living has gone up. And people can spread out again. As population grows, heading toward the 10 billion prediction for 2050, this could be the seeds of an economy-driven food movement that again brings back the family farm to neighborhoods and reduces reliance on regional processing centers.

How do we get there?

By making food purchase choices that get back to food and away from food products. Be prepared to prepare food, to cook, to put culture back into your home and community. Agriculture depends on social culture. It comes down to how we choose to live.

Ian Gallacher is a freelancer based out of Oregon.