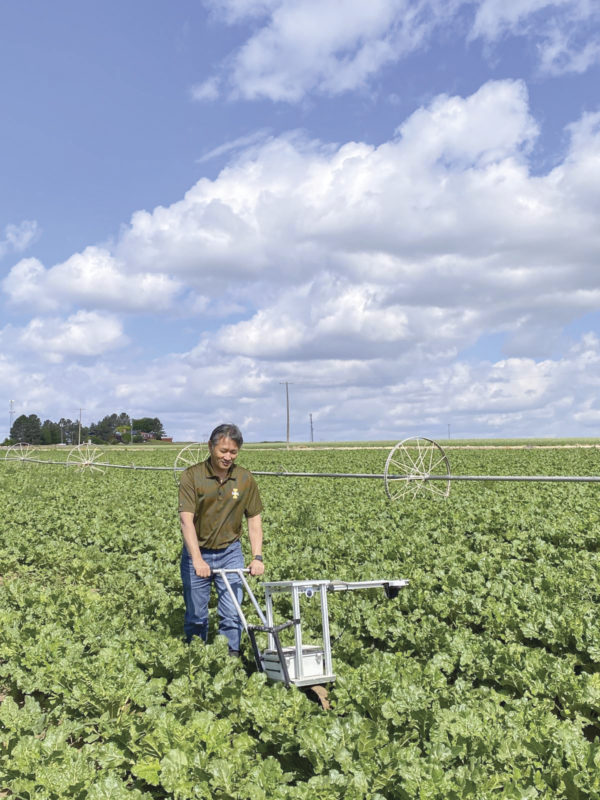 Jae Ryu, an associate professor in the University of Idaho’s Department of Soil and Water Systems, collects data in a field to help an autonomous robot differentiate between weeds and sugarbeet or onion crops.

A pair of researchers from the University of Idaho’s College of Agricultural and Life Sciences are partnering with a Washington company to develop a solar-powered robot that will rove autonomously through farm fields and eradicate weeds.

Jae Ryu, an associate professor in the department of soil and water systems; and Jerry Neufeld, extension crops educator in Canyon County, are collecting data in Idaho farm fields to help the robot differentiate between weeds and two of the state’s major crops – sugarbeets and onions.

The company behind the project, Aigen – based in Kirkland, Washington – hopes to have a prototype of the robot finished by late this summer. It will be adapted for use in other crops later.

The robot will have wheels and will be roughly the size of a shopping cart, rolling between rows in farm fields before crop canopies close. A small arm will grasp and pull little weeds; the robot will emit an electric shock to fry the larger weeds.

“They’re trying to make it as small as possible and light as possible so one person could lift it up and put it in the back of a pickup,” Neufeld says.

Ryu says the robots could provide an answer to Idaho farmers who have been unable to find enough field workers for simple tasks such as weeding. He believes new technology will play an increasingly important role in addressing the farm labor shortage. In the near future, he expects drones will be spraying fields now treated by cropduster pilots.

“Maybe over the next few decades we’re going to see a lot of this kind of autonomous vehicle everywhere,” Ryu says. “Technology is improving so fast these days. We have to accept this technology to make our life easier.”

Ryu says the robot could also fill a niche by providing weed control on organic farms.

“This is also very beneficial for environmental ecosystems,” Ryu says. “Farmers are going to reduce their chemical applications.”

Since April, Ryu and Neufeld have gone out into sugarbeet and onion fields every five days, weather providing, to take photos of weeds. They manually push a cart fitted with an accelerometer to take two photographs of the ground per second while the cart is in motion. Aigen uploads the photos from their SD cards to build the database the robot will use to tell the difference between weeds and crops.

“I’m also thinking to develop an education and training module to help farmers operate the ground robot safely and wisely in the farm field,” Ryu says.

The researchers are uncertain how much each robot unit will cost to build or how much ground an individual robot will be capable of covering in a set amount of time.

Ryu has applied for an Idaho Global Entrepreneurial Mission grant through the Idaho Department of Commerce to fund development of a similar autonomous robot that would take the field photographs in lieu of manually pushing a cart.

If the IGEM grant is funded, that robot could also be used to aid in ground truthing for some of his additional research involving drones. One of those projects, funded by the Idaho Wheat Commission, entails flying a drone with multispectral sensors to detect the presence of wireworms in wheat fields. Ryu has also researched using multispectral sensors to identify early symptoms of pink root disease in onions.

This article originally appeared on the Sugar Producer website, June 16, 2022