Data shows that short or long dry periods can have a significant negative impact on subsequent lactation production, reproduction and SCC.

An effective transition cow program is a critical element in managing a dairy farm. Over the past 10 years, dairy farms are paying closer attention to how cows are managed during the transition period. Successful programs have low incidence rates of lactation startup problems, such as subclinical ketosis or metritis, or udder health problems such as mastitis.

One aspect of the transition cow program is the timing of when a cow is dried off and the dry-off protocol that will be followed. In recent years, the use of selective dry cow therapy has steadily grown. We have also seen farms dry cows early to manage the milk supply as well as the milking herd inventory. Due to the production of more overall milk and improvements in reproductive programs, cows are being dried off with higher milk production and, depending on the situation, in some cases this has resulted in either a short or long dry period.

Does drying off early or drying off high-producing cows result in poor transition to the next lactation? Using 3.6 million Holstein lactation records we've collected since 2016, we will analyze and discuss current trends and impacts as well as suggest how producers can more closely monitor impacts of short or long dry periods.

With a shift in fewer cows with short dry periods and slightly more cows with long dry periods, the data also shows an increase in pre-dry-off milk yield based on last test day milk production. Data shows how second-lactation Holsteins milked 3X with a 40 to 70 days dry period in 2021 have almost 6 more pounds of milk on the last test day as compared to 2019. Startup milk production also increased by almost 3 pounds. The same trend occurred for third-lactation cows. Cows with shorter and longer dry periods and Holsteins milked 2X all had the same trend of increased milk yields prior to dry-off and higher milk production on the first test day of the subsequent lactation.

Although impacts of short and long days dry have been well reported, Tables 1 and 2 provide current data for the impact on second- and third-lactation Holsteins milked 3X and 2X, respectively.

Because there has recently been an increase in the percent of cows with longer dry periods, it could be important to understand the impact of longer dry periods on production and udder health in the subsequent lactation. Figure 1 shows the distribution of second-lactation Holsteins milked 3X based on the previous lactation's number of days in milk (DIM) at dry-off, while Figure 2 shows the impact on milk production and SCC on the second lactation. 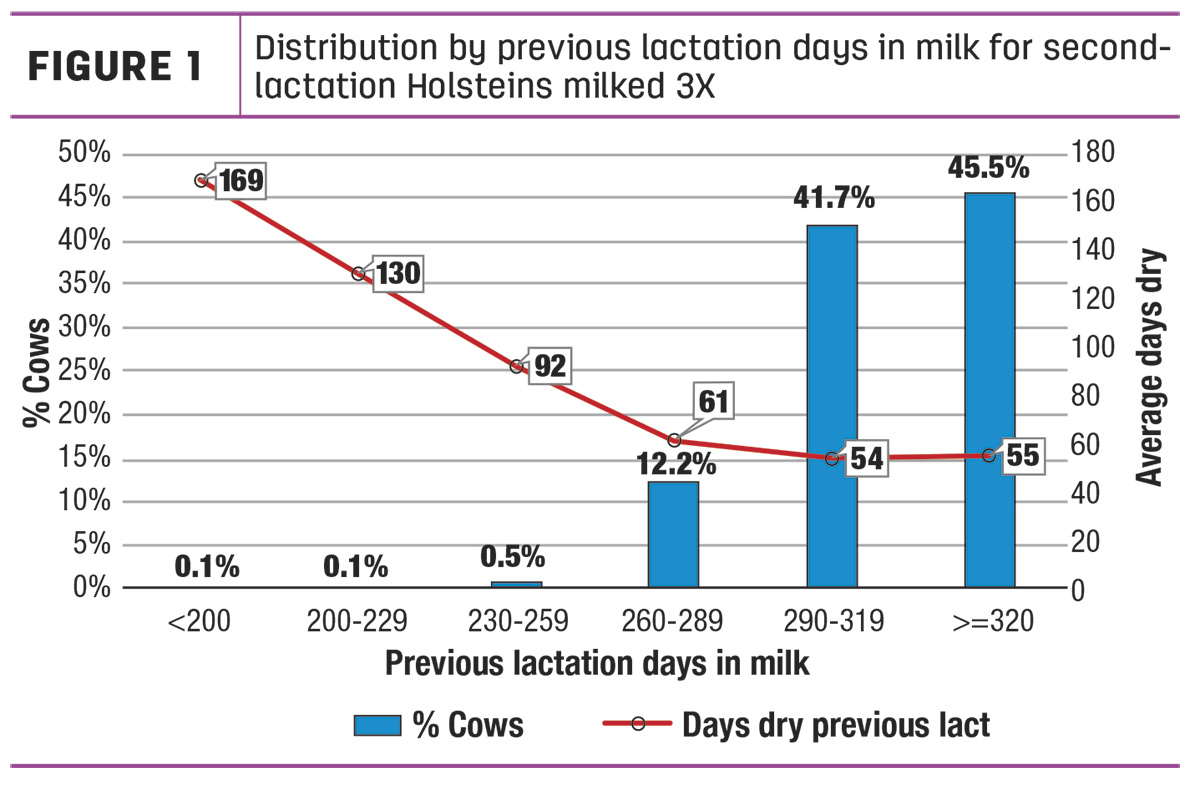 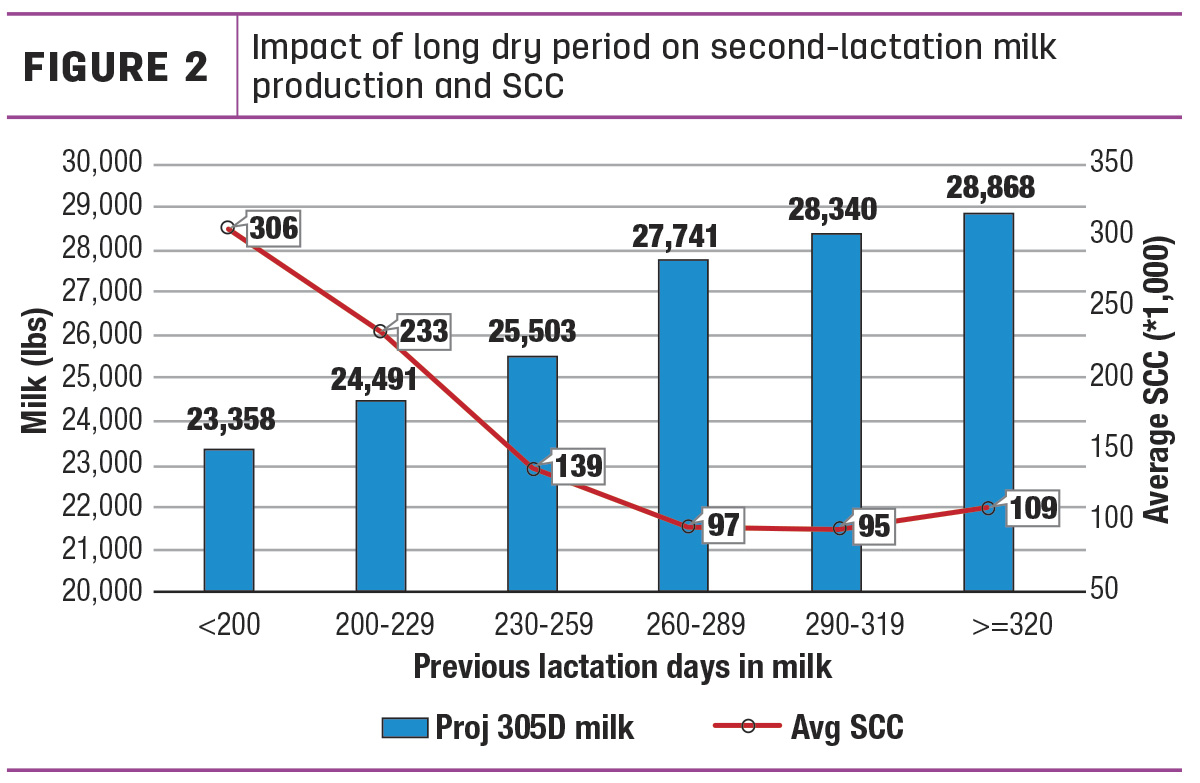 The impact of the amount of milk produced at dry-off was analyzed by splitting the cows into five equal-sized groups by lactation number. Ranking from low (Q1) to high (Q5) was based on the last test day milk production prior to dry-off. Table 3 shows the results for second-lactation and third-lactation cows.

Monitoring impacts of dry period length in your herd

Although averages from a large national database can be helpful in pointing out overall trends, it is important to evaluate how your herd is performing. It obviously starts with putting in the cow events correctly, such as dry dates and calving dates, so these can be used in the analysis. Having additional data, such as milk yield and SCC, will help you assess if there is a significant impact from short or long dry periods in your herd.

Using a herd management program like PCDART, you will be able to evaluate the impact of the short and long days dry on cows. By grouping cows by lactation group and days dry group (1 to 39, 40 to 70, 70-plus) and then looking at the last and first test day performance, it is straightforward to quickly assess the percent of cows in each group and how the groups differ in performance.

The most common key items you can evaluate are percent cows in each group, first test day milk production, lactation average SCC and projected 305-day milk. Using July 2022 DRMS DairyMetrics data from over 9,200 herds and taking seasonality into account, the current national Holstein average showed 8% of cows calving with short dry periods and 20% of cows with long dry periods. The top 5% of producing Holstein herds showed 4% and 9%, respectively. For Jersey herds, the top 5% of producing herds show a 5% and 18% distribution, respectively. If you notice a significant number of your cows experiencing a short or long dry period, evaluate the difference in projected 305-day milk and lactation average SCC of the subsequent lactation, which will point at the potential opportunity of having fewer cows in the short or long dry period groups.

As part of ensuring your cows have an optimal transition into the next lactation, check the percent of cows with short or long dry periods using either your DHI Herd Summary or herd management software. If the percent cows 40 to 70 days dry starts decreasing, evaluate the impact cows with short or long days dry are having on the subsequent lactation production, reproduction and udder health.