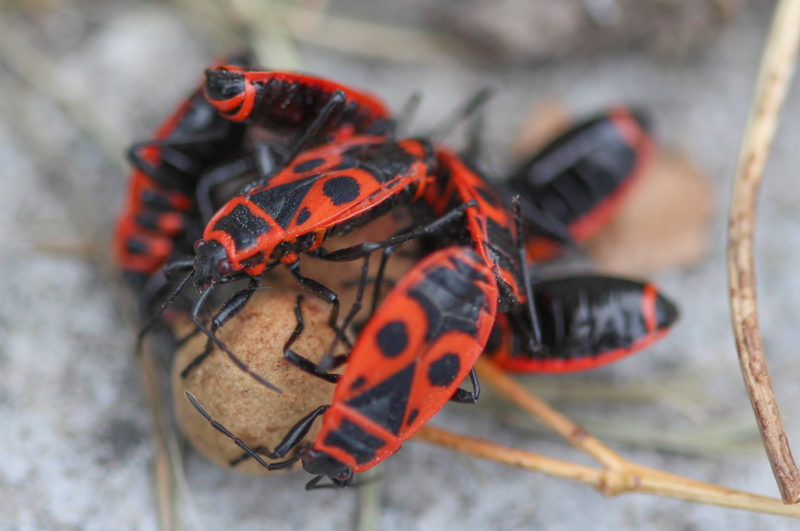 Red fire bugs tend to flourish with long, hot days and are moving into many areas in the Intermountain West area. Photo provided by Brad Stokes.

The “murder hornet,” Vespa madarinia, invasion of western Washington and southwestern British Columbia began in 2020 and continued during 2021. A newly invasive and established leaf-footed insect was found in both Idaho and Utah during 2021, Centrocoris volxemi. And now, another insect of concern is here: the red fire bug, Pyrrhocoris apterus. This insect has invaded, established and is spreading its known range in southern Idaho from adjoining Utah. It’s clear to me that invasion biology (the process of introducing, establishing and possibly harming new ecosystems and economies) will play a bigger role in modern human society in the coming decades and century.

The red fire bug, P. apterus, was first discovered and properly identified by entomologists near Salt Lake City, Utah, in 2008. In 2021, substantial established populations were first found in the great state of Idaho near Twin Falls and Burley. The native range of the red fire bug includes Europe and eastward toward northwestern China. To date, scientists do not know how it was introduced into the U.S., though a reasonable hypothesis might include imported plant materials, commerce or worldwide travel.

In temperate regions such as Idaho, they have one generation per year and have five total nymphal instars (or stages) before reaching adulthood. They may reach up to a 1/2-inch in length as adults, with nymphs being smaller and having wingpads present. Red fire bugs have a black head, eyes, antennae, legs and no ocelli (simple eyes), which can help distinguish them from another notorious and commonly seen insect, the boxelder bug, Boisea trivittata.

Adults have four prominent black spots on their hemelytra (forewings); the abdomen and prothorax are red along the margins, and, often, the hemelytra do not cover the entire length of the abdomen normally, hence the species name – apterous (without full wings). Interestingly, adult red fire bugs may be polymorphic (many forms) as adults regarding their wing development. They can be apterous, brachypterous (short winged) or macropterous (fully winged); at the population level, it is usually 90% apterous, 5% brachypterous and 5% macropterous, respectively.

Red fire bugs have piercing-sucking mouthparts that are inserted into host plants to extract their food source. Typically for this species, the seeds of these plants are the primary food source. Host plants include several prominent plants in the malvaceae (mallow) plant family, to include: mallow, globe mallow, checker mallow, hollyhock, hibiscus and especially linden trees. Other reports indicate red fire bugs also aggregate around black locust and spruce trees; both are widely common throughout Idaho. The feeding of red fire bugs is unlikely to produce any noticeable damage or direct harm to host plants. Another interesting note is they have been observed eating other insects (dead or alive) and practicing cannibalism.

Red fire bugs may become a nuisance by home invading or may become an outside-congregating insect pest, especially during late fall or early winter months. Most true bugs overwinter in the adult life stage, and during fall and early winter, they are seeking refuge from the bitter cold temperatures to survive until next spring. The best refuge sites include homes, sheds, barns and any other type of human structure that would shelter them from extreme winter temperatures. Red fire bugs can survive cold temperatures; they have a cold tolerance of 5°F (minus 15°C) for up to two weeks. Red fire bugs can emit a foul odor and possibly permanently stain carpet or fabrics if they are mechanically squished or crushed indoors by humans. Additionally, they regurgitate unpleasant and foul-smelling fluids from their digestive tracts.

The best way to prevent red fire bugs from becoming a nuisance insect pest is to practice integrated pest management (IPM) practices and strategies. By sealing entry points (doors and windows, etc.) to your home or structure, red fire bugs cannot enter. This by far is the best way to prevent these insects from entering a structure in the first place. Improving the weatherstripping, repairing torn screens and caulking around windows is not only part of home ownership, but it will help keep these pesky insects at bay.

If populations are found indoors, a shop vacuum is advisable for physical removal by filling the bottom with 1 inch of water (with dish soap). The insects will drown, and cleanup will be relatively easy. Other means of control (insecticides) exist, though none at this time specifically list the red fire bug on the label – to be a lawful pesticide application the label must specifically list the pest insect type, application location and be labeled for home use.

In addition to introduction and establishment in the U.S., during the current century, this insect has been recorded invading and establishing in the following countries: Canada (2017), Australia (2018), Malta (2018) and Norway (2020). To date, the red fire bug has expanded its range within the U.S., expanding from near Salt Lake City, Utah, to Twin Falls and Burley, Idaho, and now it has been officially detected in Boise (2022). Though most of the population is apterous and cannot fly, the macropterous (5%) portion of the population is well suited for flight, long-distance dispersal and establishment in new areas. Long photoperiods and high temperatures, as we have seen this summer, are favorable abiotic factors that could help this invasive species spread throughout the Intermountain West in coming decades.

Biotic factors that lead me to believe the range will continue to rapidly expand in the Intermountain West includes the copious amount of available host plants, genotypic or phenotypic plasticity and feeding behavior of this particular insect species.