Recently, in central Nebraska, I have heard about more hay bale fires. So I started wondering how well the producers I consult with were doing on moisture management of their hay. Upon reading more literature, I began to see increasing mention of “brittle” hay. The premise being hay that is too dry is fragile and breaks during baling. The loss of the delicate leafy portions of the forage results in protein and overall forage quality losses. Furthermore, brittle hay processed through a batch mixer often becomes dusty, resulting in more feed losses.

So the first thing I did was gather hay reports (n = 4,017) sent to Ward Laboratories Inc. in 2021. I only included samples that were described as hay by the producer sending the sample. Then I looked at the moisture of those reports (Figure 1). 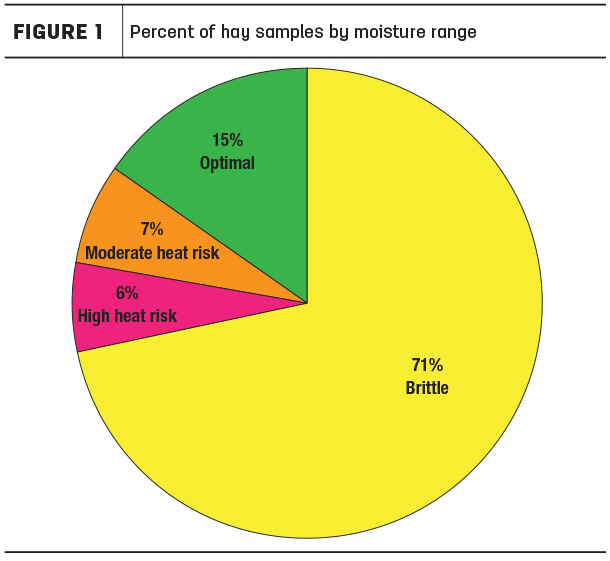 Figure 1 shows that 13% of samples were at risk for heat damage or combustion. This number may seem low; however, it did surprise me. Imagine if 13% of all stored hay bales caught on fire! We are seeing reports of low hay inventory now, just imagine how damaging this could be. Furthermore, we certainly aren’t doing enough to evaluate our mold and mycotoxin risks if 13% of baled hay has such high moisture levels.

The average quality parameter values were evaluated for statistical differences between means of brittle and optimal moisture hay samples. Further, because protein and fiber content are quite different in alfalfa than in grass hay, samples were evaluated within three groups: grass, legume and mixed hay.

With these results, we conclude that in grass hay, optimizing moisture can improve forage quality parameters. The importance of moisture was specifically significant in grass hay. This is interesting as most of the literature covers effect of moisture on forage quality in alfalfa. This data shows that in legume hay optimizing moisture can increase protein concentrations. However, other quality parameters were not impacted by moisture levels in legume hay.

These forage quality differences are minor. Yet, it is key to remember when looking at samples from various producers under various circumstances. Each sample was managed differently. Understanding these slight differences can help us make better management decisions about hay harvest and baling moisture.

However, a subtle difference when large robust sample groups are examined could mean a greater impact for a forage producer who manages his moisture with more precision to avoid both fire risk and brittle hay. Holding all other factors influencing forage quality equal, how much more protein could be held in your hay if leaf losses were reduced through optimizing baling moisture?

In conclusion, heat damage and spontaneous combustion risks should always be at the forefront of hay moisture considerations. However, overdrying can diminish forage quality. Overall, focusing on baling at optimal moisture levels might be one way forage producers can improve their forage quality.