Genetic selection is not a quick fix for reducing occurrences of prevalent diseases facing today’s dairymen. Nevertheless, it demands to be a part of the discussion. Genetic selection should be viewed as an investment in the herd for the long term because compounding effects over generations are realized only with time.

Proper management strategies are undoubtedly the most influential part in keeping cows healthy, but the genetic component is a recognizable contributing factor. As forward-thinking dairy farmers, it is imperative to capture this genetic control and begin making better decisions about sire selection for the well-being of dairy cows.

We need a genetic prediction

Previous to the spring of 2016, it was difficult for producers to consider the genetic component of a cow’s susceptibility to disease from a genetic level because a way of measuring and predicting these traits did not exist.

The additional selection for milk production in recent decades has amplified the antagonistic effects of reduced health and fertility and indirectly elevated the rates of diseases on commercial dairy farms, making this a very relevant issue.

To combat this, millions of lactation and health event records were collected to build a cow population database, combined with the genotypes from over 100,000 animals and Holstein pedigree information.

They used these resources to develop the genetic prediction describing the risk for six common diseases in U.S. dairy cows and released this genomic test to the public last spring. These traits include:

Each trait is weighted based on the national disease prevalence and its economic impact, then the results are combined into the Wellness Trait Dollars (WT$). In addition to these wellness traits, WT$ includes a small factor for polled genetics (homozygous and heterozygous received different weights).

To complete the DWP$ index, a 30 percent weighting was given to the value from WT$. The resulting value estimates the potential profit an animal will pass along to its offspring, similar to NM$.

In summary, DWP$ is analogous to NM$, but DWP$ has slightly less emphasis on production traits while redistributing that to include the prediction for WT$. See Table 1 for a breakdown by trait with relative weights for NM$, DWP$ and WT$ index. 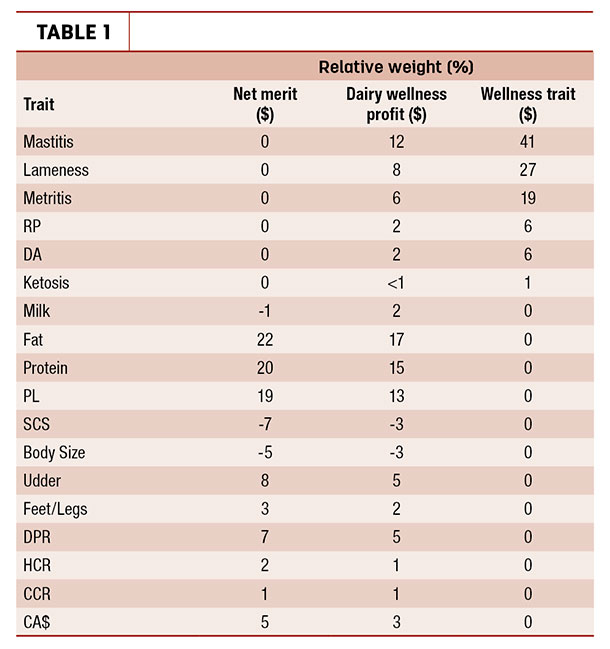 The value of DWP$ has the potential to be leveraged by dairymen in a variety of ways. For example, if we consider two high-reliability sires, Bull A and Bull B in Table 2, the individual traits listed offer a general description of the daughters from the bulls.

Bull A and Bull B are fairly similar and generally comparable for TPI and NM$. This information is at a dairyman’s disposal to make sire selections, but with the addition of WT$, the picture sharpens the focus and grants more detail to the average daughter description.

Despite the similar traditional index values for these two bulls (TPI and NM$), an extreme contrast is shown when the WT$ is considered. Table 3 displays the differences of the major index values mentioned.

If replacement heifers and cows are genomic tested for DWP$, selection decisions can be made to intensify the elite genetics of the herd.

Combining this strategy with the same selection for the service sires, faster genetic progress is made. Holstein Association USA publishes the top genomic and proven sires for DWP$ and WT$ on their website to make information for sire selection decisions more readily available.

The DWP$ selection index piqued dairymen’s interest initially, but as a stand-alone selection index it appears to have lethargic adoption. Some larger dairies have fully committed to the program and genomic-tested all of their replacement females and chosen service sires based on DWP$, like mentioned earlier.

Many dairy farmers continue to use their previous sire selection methods in tandem with consideration for the WT$ values. These dairymen realize selecting for genetics with reduced disease incidences are a high priority and are willing to combine these traits with their previous selection criteria.

When faced with disease problems on a dairy, genetics is definitely not the quick-fix answer many farmers are looking for, but by utilizing an indication of an animal’s transmitting ability for susceptibility to disease, the positive effects can be compounded over generations to come.

So let’s combine the best management practices with conscious genetic selection to reduce disease incidence and improve well-being on all dairy farms.

Michael Schmitt is the genetics information analyst for Accelerated Genetics. He specializes in database management and providing genetic solutions, education and support to the company’s sales team and customers.