How well do you know repro? Tackling the terms

When we talk about how to evaluate reproductive performance in a dairy herd, numerous terms come up in the discussion. Some of these terms are related to averages, and others are related to rates (or risks).

But what do they really mean? Why are averages not the best way to determine reproductive performance rates? How are they calculated? Let’s see some examples and understand what is really happening with a dairy’s reproductive program.

Average, by definition, represents a value that is an approximation of the arithmetic mean. Averages are good to evaluate overall execution, but they are not the best way to fully evaluate performance. By way of example, let’s say we will compare two dairies with replacement heifers delivering their first calf every year, with an average age at first calving of 23 months.

Dairy A has a range of heifers calving from 20 to 30 months old, while Dairy B ranges from 22 to 26 months. Even though they have the same average, we can say that Dairy B is more competent at getting heifers bred and pregnant in a timely manner compared to Dairy A. This definition is true for all averages that are calculated on a herd, listed above.

However, to evaluate effectiveness of a reproductive program, it is really important to combine how efficiently cows are getting pregnant with how fast animals are being submitted to an A.I., giving them a chance to become pregnant in a herd. For this, we have to understand some terms and how the calculation is done.

That is why the delimitation of the VWP on a dairy is so important. Let’s evaluate how insemination rhythm can influence calculations of HDR on a dairy with its VWP stipulated at 50 days in milk (DIM).

Cows that are inseminated before the VWP are not included on the calculation, and cows that receive their first A.I. with 100 DIM have been eligible for almost two-and-a-half cycles (first cycle: 50 + 21 = 71; second cycle: 71 + 21 = 92) after the end of the VWP and were waiting that long to get a chance to become pregnant for the first time. These strategies will negatively affect the calculation.

Added to this, the moment for the pregnancy diagnosis and the management decision of what to do with cows presented as not pregnant by the veterinarian is also important and has an impact on the calculation. Inseminated cows will normally display estrous behavior 17 to 23 days after a previous A.I., and in herds that are performing estrous detection, these cows will be re-inseminated. 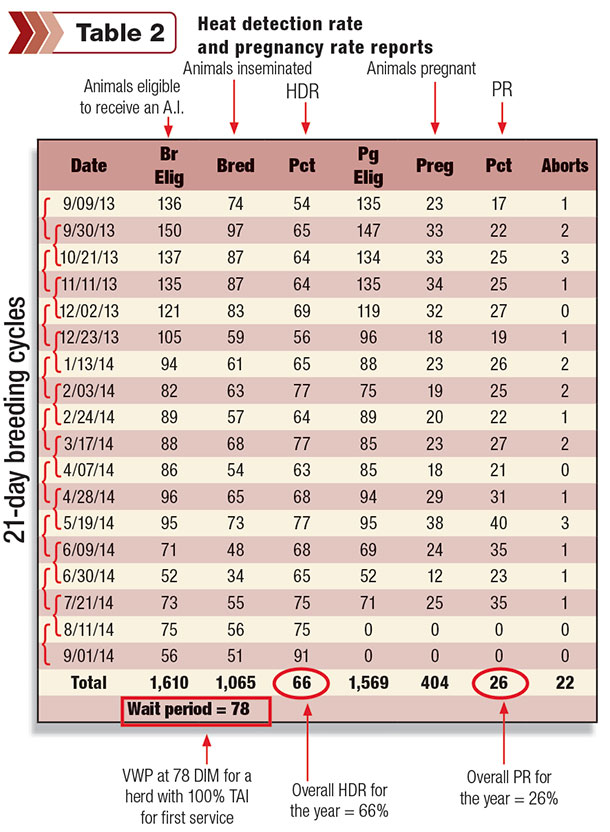 After a negative pregnancy diagnosis, cows need to be re-inseminated, either by a stimulation of estrous behavior with a prostaglandin injection or after a completion of a timed-A.I. protocol, known as a Resynch.

In this scenario, cows will be 30 to 50 days since last A.I. to receive another chance to become pregnant, and with the longer interval, cows pass through more cycles without being re-inseminated. This can also have a negative effect on the calculation.

That’s why, when we are evaluating reproductive performance, we cannot take only one number or average into consideration. It’s a combination of management decisions, aggressiveness in finding eligible cows to receive A.I. and consistency of the breeding program and A.I. technique that will determine the effectiveness and adequacy of your reproductive performance. PD

Glaucio Lopes is a veterinarian. He graduated from Brazil and received his master’s degree in reproduction of dairy cows at the Department of Dairy Science at the University of Wisconsin – Madison. He is employed by Accelerated Genetics as a reproduction specialist.