Inbreeding: Manage it to maximize profit

While certainly not a new concept, inbreeding has become a hot topic in recent years. Producer concern is on the rise over whether genomics is creating too much inbreeding in the dairy cattle population. The worry is that there will soon be limited options to which a herd can be bred to avoid negative effects of inbreeding.

While mating an animal to her father or brother is certainly not desirable, we need to ask what the real goal is in terms of inbreeding. Should we aim for 0 percent inbreeding or, rather, manage it to maximize profit?

The linear effect of inbreeding depression

A common misconception is there is a magic level of inbreeding we should never go beyond for any given mating. In reality, numerous studies over time have shown the effects of inbreeding depression to be linear.

For every 1 percent increase in inbreeding for a mating, you will realize $22 to $24 less profit over the life of the resulting offspring. The same cost, or loss, is predicted when going from 9 percent to 10 percent inbreeding, as is expected between 1 percent and 2 percent.

It’s well-documented that inbreeding has been on the rise since the mainstream adoption of A.I. Despite this increase, dairy cattle have made significant strides in production traits like milk, fat and protein. It’s safe to say that producers would not trade today’s high-producing cows for the less inbred, but also lower-producing, cows of the 1960s. 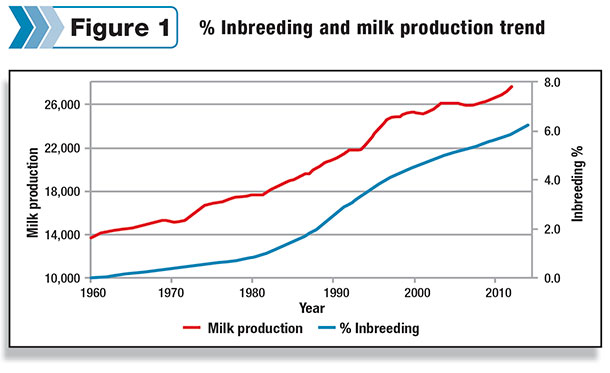 In this analysis, cows born between 2005 and 2010 with at least one lactation on record were included. Each individual herd was first analyzed separately, and cows were split into quartiles based on their individual level of inbreeding.

In Table 1 , you can see the difference in genetics, first-lactation milk production and Net Merit between the top 25 percent most inbred from each herd and top 25 percent least inbred animals from each herd. The most highly inbred quartile of cows was also the most genetically superior group of cows in each of these 10 herds.

Despite the elevated inbreeding in the most highly inbred quartile of each herd, the genetics more than make up for that when their actual performance is measured. Their genetic levels, pounds of milk and milk deviations were all favorable for the more highly inbred but also more genetically superior group.

This is not to say that selecting a mating resulting in a 25 percent inbreeding level is the best option, but rather that when managed properly as part of a program, excellent genetics can more than make up for predicted inbreeding depression.

What many producers also don’t realize is that current proof values of a bull already account for the level of predicted future inbreeding. Adjustments are made in favor of a bull that is considered an outcross sire, and a bull that is more closely related to the average population will see a negative impact on his PTAs because of these adjustments.

To manage inbreeding, we look to an example to see how managing rather than avoiding inbreeding is the best route.

Table 2 shows three options to use for a mating in your herd. Rabo and CR both offer high Net Merit levels. However, their 8 percent and 6.5 percent inbreeding levels would be above the suggested 6.25 percent industry standard, which would eliminate them as potential mating sires in many breeding programs. Porter is the third option, and the outcross mating with him would only cause 1 percent inbreeding.

Above-average inbreeding levels would result from this female’s mating with Rabo or CR. Yet both of these choices would still produce a much more profitable mating over the life of the resulting offspring than a mating to Porter, even after the adjustment for inbreeding depression is accounted for.

So while 6.25 percent is often considered the industry norm inbreeding limit, there are often cases when a mating beyond that level of inbreeding still produces the best potential for future profit.

Within your herd, a two-part approach to record management and mating can help maximize your future profit potential.

1. Maintain accurate animal identification – Inbreeding cannot be managed if it cannot be measured. It’s impossible to know what the predicted inbreeding level will be if you do not keep accurate records on your animals. A mating you thought would be a minimal 1 or 2 percent could easily become 12 percent or more if an animal is misidentified or if correct records are not kept.

If you select the best bulls available to meet your goals, and keep only those bulls in your tank, then you automatically avoid poor mating decisions, provided you manage inbreeding to appropriate levels.

After you’ve selected the best bulls for your genetic plan, the more traditional mating method suggests a first-choice, second-choice and third-choice sire from that group of bulls. Each of the three choices would ensure a mating below your set maximum inbreeding level.

However, a simpler mating method is a pen mate, which takes the opposite approach of a traditional mating program. Instead of trying to find the perfect mating for a cow or heifer, a pen mate lists the bulls in your tank that should not be used on any given female to avoid a mating that exceeds your set inbreeding maximum.

A pen mate also increases efficiency and accuracy for technicians on big breeding days. A technician can forgo the stress of loading five A.I. guns with five different bulls, making sure each cow is bred to the correct bull and each insemination is then recorded accurately.

Instead, the technician can head to the pen to breed with five A.I. guns all loaded with one bull that appropriately manages inbreeding for all five cows. The pen mate aids in accurate recordkeeping and also provides peace of mind that inbreeding is properly managed.

Takeaways on inbreeding
With all of this in mind, it’s important to ask yourself if your goal is to eliminate inbreeding in your herd or to maximize profit potential.

1. The average inbreeding of animals is on the rise but so are genetic values and average production levels.

2. Instead of aiming for 0 percent, or even sticking to the industry average 6.25 percent inbreeding maximum, the goal should be to manage inbreeding levels within your herd so you can capitalize on genetic progress and maximize potential future profits.

3. Accurate identification and records are key to managing inbreeding in your herd.

4. Proper sire selection to fit your genetic plan will ensure no mating is a bad one, but a simple pen-mate program can give you added peace of mind that inbreeding levels are kept below your desired maximum. PD

Nate Zwald is U.S. sales manager at Alta Genetics. He can be contacted by email .

References have been omitted due to space but are available upon request. Click here to email an editor.