Dairy gets a better margin protection program for 2019

Editor's note: Updated with House passage of the bill. After nearly six months in limbo, the 2018 Farm Bill – including substantial improvements in the federal dairy safety net – received critical approval in rapid succession this week.

A congressional conference committee approved the bill on Monday, Dec. 10, followed in short order by approval in the full Senate on Dec. 11. The Senate vote was 87-13 in favor of the bill.

The House approved the bill, Dec. 12, on a 369-47 vote. U.S. Secretary of Agriculture Sonny Perdue said he would encourage President Trump to sign it.

The 2018 Farm Bill changes the name of the Margin Protection Program for Dairy (MPP-Dairy) to the Dairy Margin Coverage program. The changes outlined below would be in effect from Jan. 1, 2019, through 2023. A breakdown of key dairy provisions of the 2018 Farm Bill follow:

As approved in the Bipartisan Budget Act last February, the Tier I level under the program is 5 million pounds of annual milk production, up from 4 million pounds in the original program.

The biggest areas of change regard insurable margin levels and the cost of premiums. Under the Dairy Margin Coverage program, higher Tier I margin coverage levels – at $8.50, $9 and $9.50 per hundredweight (cwt) – are available. Those additional margins are not available at Tier II, however, and premiums would likely be cost-prohibitive anyway.

New program coverage premiums at the Tier I and Tier II levels are listed in Table 1. Dairy operations making a one-time election for coverage for the entire five-year length of the farm bill will receive a 25 percent premium discount, regardless of whether coverage is under Tier I or Tier II. Producers making annual coverage elections would not be eligible for the discounts. 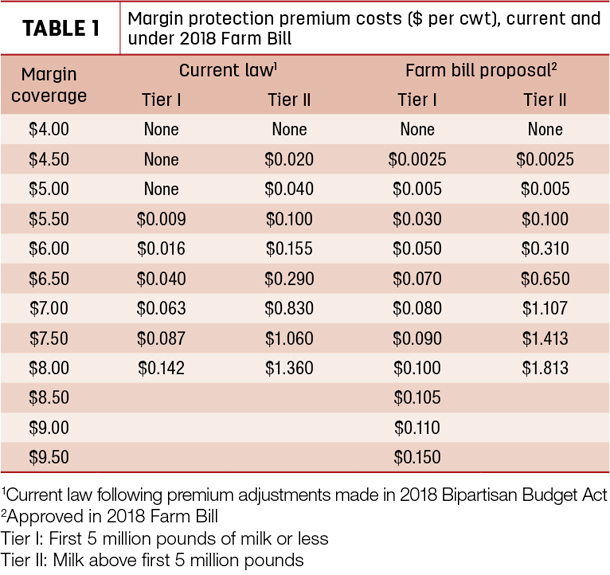 The farm bill maintains the existing production history calculations from the 2014 Farm Bill, allowing producers to use 2011, 2012 or 2013 as their base production level and accounting for annual updates indexed to national milk production growth through Jan. 1, 2019. Dairies not in operation in 2014 or earlier, as well as new dairies, would designate one year to establish milk production history.

Beneficial to large producers, the farm bill removes the current 25 percent minimum annual milk production coverage requirement. And, it allows operations to participate in both Dairy Margin Coverage and Livestock Gross Margin for Dairy (LGM-Dairy) programs, but not on the same production.

Multiproducer dairy operations will be considered as a single dairy.

‘Unused’ premiums to be refunded

The farm bill requires the USDA to return any premiums not used to make indemnity payments during calendar years 2014 through 2017 back to dairy farmers, instead of sending surplus funds to the U.S. Treasury. Up to 75 percent of the individual dairy farmer repayment can be used to pay for future Dairy Margin Coverage premiums, and/or up to 50 percent may be taken as a direct cash repayment. Some estimates put the total of unused premiums at about $75 million.

The bill also specifically addresses dairy producers who, during the delay in announcing MPP-Dairy provisions for calendar year 2018, enrolled in LGM-Dairy and were therefore prohibited in participating in MPP-Dairy after more attractive details were announced. The farm bill would allow those producers to retroactively sign up for 2018 MPP-Dairy coverage. Read: State MPP-Dairy payments listed; LGM-Dairy participants on outside.

The farm bill requires USDA to analyze and/or revise feed cost calculations previously used under the MPP-Dairy program. Including:

The farm bill also calls for the establishment of a fluid milk donation program, setting eligibility guidelines and determining reimbursement limits. The program would reimburse eligible dairy organizations for costs incurred for donating milk to qualified nutrition assistance programs. The program would be funded through the Commodity Credit Corporation, at levels of $9 million for fiscal year 2019 and a maximum of $5 million per year thereafter.

“Specifically, for dairy, valuable reforms were made to the dairy title, making the risk management program much more useful to dairy farmers and their management plans,” said John Rettler, president of FarmFirst Dairy Cooperative.

“Dairy farmers are smart about managing their costs and increasing their bottom line, but risk management options are not a one-size-fits-all. This new program addressed changes in the feed-cost formula and allows greater flexibility, allowing farmers of various sizes to participate in Tier 1 premium rates, as well as allowing simultaneous participation in this new program and the Livestock Gross Margin insurance program,” said Rettler.

“Dairy farmers are hurting and have been hanging on in hopes of something positive, and this bill delivers improvements for our farmers,” said Brody Stapel, president of the board of directors for Edge Dairy Farmer Cooperative.

Stapel, who farms with his family in eastern Wisconsin, noted these specific parts of the bill which Edge pushed for aggressively in its advocacy work on Capitol Hill: trade promotion, risk management and a nutrition title that develops a framework to healthly eating for people in lower-income nutrition programs.

“If the goal is to promote healthy eating, it only makes sense to include milk in those programs. You won’t find a much more nutritious option,” Stapel said.

“The farm bill passed by the full Congress represents a truly bipartisan spirit and offers genuine hope for agriculture,” said Jim Mulhern, president and chief executive officer of the National Milk Producers Federation (NMPF). “The dairy provisions adopted by Congress will bring critically important assistance to the nation’s dairy farmers. The sooner the president signs the bill, the sooner that the Agriculture Department can implement these important policy improvements.”

“IDFA (International Dairy Foods Association) worked closely with colleagues at NMPF to unite behind shared solutions for dairy,” said Michael Dykes, president and chief executive officer of IDFA. “Members of Congress have called our collaborative efforts historic, refreshing and, best of all, exceedingly helpful to their farm bill efforts. The dairy provisions included in the bill represent the positive outcomes we can gain through sustained industry collaboration.”

“Dairy works best when it works together,” Mulhern said. “Congress noticed. Hard work and cooperation among NMPF, IDFA, member co-ops, state associations and the entire dairy community helped craft a bill that will benefit us all.”