How farms have managed through the VFD rule change

In January 2017, the FDA issued new regulations for the use of some medicated feed products in livestock. Antibiotics considered important to human medicine now fall under the Veterinary Feed Directive (VFD). A VFD is a written authorization from the veterinarian providing oversight of the animals on the farm.

Oversight means being familiar with the care and keeping of the animals in order to make medical decisions, such as treating a group of animals with medicated feed. The veterinarian also needs to be readily available to follow up with the farm should the animals not respond to treatment or complications arise from the medication.

The owner, or person in charge of caring for the animals, agrees to follow the veterinarian’s recommendations. This is known as the veterinary-client-patient relationship, or VCPR for short. A VCPR has long been a requirement for farms to use prescription medication; this same requirement now pertains to VFD-regulated medicated feed additives.

Increasing antimicrobial resistance in some disease-causing bacteria has all areas of medicine re-evaluating antibiotic use. Antibiotics are used in animal agriculture, as in human medicine, to treat disease. Some of the animal feed-grade antibiotics had been used to improve rates of gain and feed efficiency.

For the medically important antibiotics, these growth promotion uses are no longer permitted. If a group of animals are sick, or have a high likelihood of becoming sick, it is important to have the option to deliver a course of antibiotics via the feed.

The VFD rule change requires a veterinarian to directly request the addition of these antibiotics to feed mixes before the feed mill can deliver them to the farm. This additional oversight is intended to decrease the chances these antibiotics will be used inappropriately.

A significant effort was made throughout the animal agriculture industry to prepare for this rule change. Even with this effort, there were bound to be challenges as farms, veterinarians, feed distributors and nutritionists adjusted to the changes.

A joint case study with Cornell University’s College of Agriculture and Life Sciences and the USDA was conducted to help understand the economic impact of VFD rule changes on dairy farms in New York. Interviews were conducted with several New York dairy owners prior to the rules taking effect and then again approximately one year after the rule change. Feed mills and veterinarians providing service to dairy farms in the state were also interviewed.

Opinions of the new VFD rules varied among dairy owners. To better understand where opinions fell regarding the rule change, it helps to consider two variables likely influencing those opinions. Namely, current reliance on medicated feed and relationship with a veterinarian (see Figure 1). 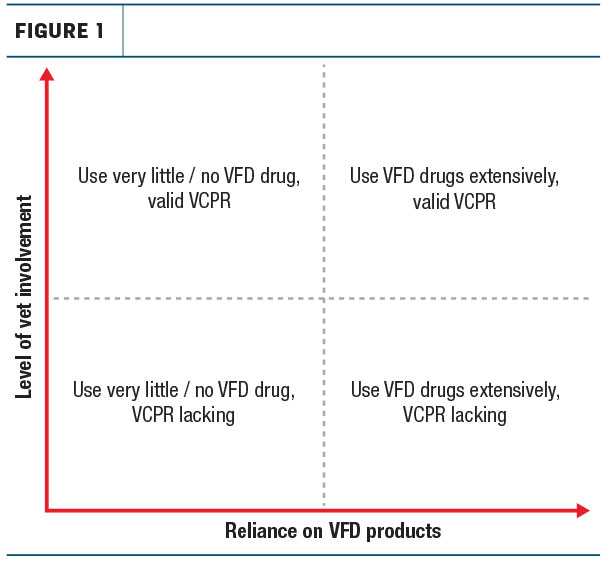 For farms that had not utilized medicated feeds now falling under the VFD there was very little or no concern at all, regardless of their vet relationship, and the perceived impact on animal health and business profitability was very low.

For farms that utilized these medicated feeds regularly but a veterinarian was already providing regular oversight, again, concern for the rule change was low. For this group, impact on animal health was expected to be minimal and due to occasional logistical issues slightly delaying delivery of medicated feed.

We had difficulty identifying farms utilizing medicated feeds regularly who did not work with a veterinarian. These farms exist and would certainly find the rule change a burden, since they would no longer have access to those medications until they established a VCPR with a local veterinarian.

The most common feedback received from dairy owners can be categorized as comments that express very little to no concern over the VFD rule changes. The farms we interviewed all had a VCPR and used VFD-containing feeds sparingly.

In our opinion, this group represents the vast majority of the milk currently produced in the state. Feedback from these farms fell into a few categories. Those included bureaucratic, logistical, future animal health concern and worry over “what’s next.”

Several comments related to the additional administrative burden associated with the VFD process, including concerns over correctly completed VFDs and document retention requirements. Most of the concern from those interviewed fell under logistics problems. Some comments were related to delays in medicated feed delivery to the farm, causing more animal illness.

These can be traced back to VFDs needing corrections, lack of specific product availability at feed distributors or difficulty finding a local distributor of VFD-regulated products in a timely manner. We categorize these as logistical issues, since all can be minimized when veterinarians, producers, feed distributors and nutritionists communicate prior to an immediate need for medicated feed.

Animal health-related comments, separate from those previously mentioned, dealt with concern over lack of access in general. Some products can no longer be fed to dairy replacements at all, and some regions have limited access to medicated feeds.

Putting our animals in properly designed facilities, providing them with optimal nutrition, handling them using low-stress methods and instituting sound biosecurity and preventive health strategies decreases disease and the need for antibiotics. It is well understood preventing disease through sound management is more profitable for farms than spending on a lot of treatments.

Finally, comments of “what’s next” wondered whether new regulations would be affecting other tools farmers rely on. Animal agriculture is a highly regulated industry since the products produced are part of our food supply. We can expect oversight relative to food safety, and protections to human health in general, to continually evolve. The dairy industry will need to find ways to operate successfully while meeting new oversight requirements.

Many in the dairy industry admit there may have been an over-reliance on some medicated feeds. Management improvements may have been delayed until economic circumstances improve, since health risks could be easily mitigated with this medication.

Instituting oversight for the use of medication in food-producing animals, regardless of how that medicine is administered, makes sense. The dairy industry is successfully working through VFD changes. As complications arise, farms are managing through them with collaboration between their herd health and nutrition advisers.

Note: This research was supported in part by the intramural research program of the USDA’s Economic Research Service.