Navigate your way through high levels of BHBA

However, as Jim Barmore, GPS Dairy Consulting, points out, elevated blood ketones (levels exceeding 1.2 or 1.4 mmol per L) may not always lead down this road.

“There is certainly increased risk for some of these metabolic problems when you have high BHBAs,” he says, but cautions, “It’s not quite that black and white.”

According to Barmore, “BHBA is correlated but not always an indication of fresh cow health.”

A high BHBA test is not always a red flag for subclinical ketosis and other fresh cow health problems. Keep in mind that the presence of BHBA is part of a cow’s natural biological process. Barmore describes it as Mother Nature’s built-in mechanism for mammals to ensure they have the energy for lactation by mobilizing body fat. Ketones serve as the fresh cow’s source of energy during early lactation.

“Don’t assume just because a cow has high BHBA numbers that automatically is bad,” he states. Take a good look at the cows and their performance, reproduction and health records. It is not uncommon for high-producing cows that tested with elevated levels of BHBAs to appear healthy and have no problem breeding back.

If this is the case, he suggests not rushing into major changes based on test numbers alone. In fact, some studies have even shown an association between low BHBA levels at the time of calving and lower milk production.

Nevertheless, there is certainly a point at which elevated blood ketones negatively impact fresh cow performance.

“It’s a balance,” Barmore says. “Can we use some of the new, more accurate testing to figure out where is the tipping point, and does that vary by herd, breed, etc.?”

Perhaps herds routinely testing and tracking fresh cow BHBA levels will someday be able to observe where that point lies. Dr. Jerry Gaska, dairy manager at Nehls Brothers Farms in Juneau, Wisconsin, alternates between testing fresh cows and heifers every other week on the 2,000-cow operation. He uses the results to determine the prevalence of cows with BHBA levels exceeding the baseline of 1.2 mmol per L and treats them according to an established protocol (Figure 1). 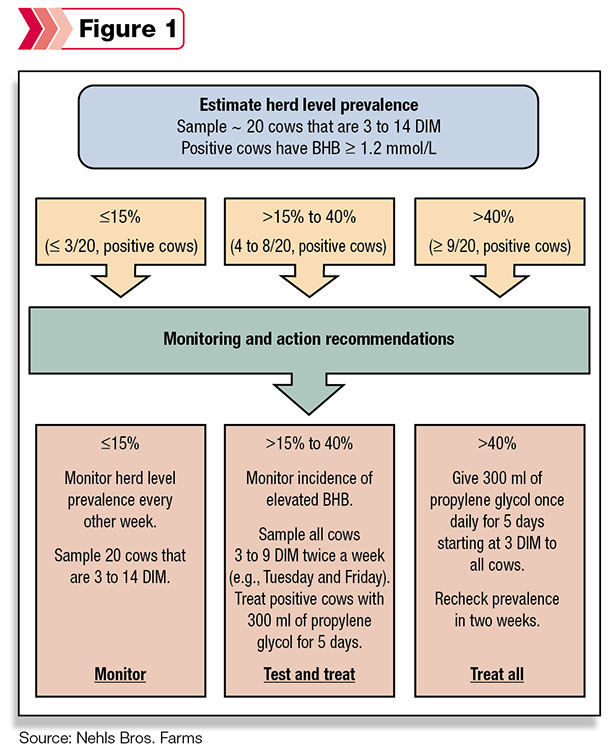 By pulling blood from the tail vein and using a BHBA/glucose testing meter, Gaska has individual cow results within 10 seconds. These numbers are entered into a spreadsheet from which he is able to pull and plot data into charts and graphs. He has found that cows with higher BHBA levels tend to experience greater levels of fresh cow problems including subclinical ketosis, displaced abomasum and metritis.

By tracking this data, Gaska has observed herd trends and adapted his protocols accordingly. For example, cows that are dry in excess of 60 days are more likely to have higher BHBA levels at calving, as are cows with longer days in milk (DIM) (Figure 2). 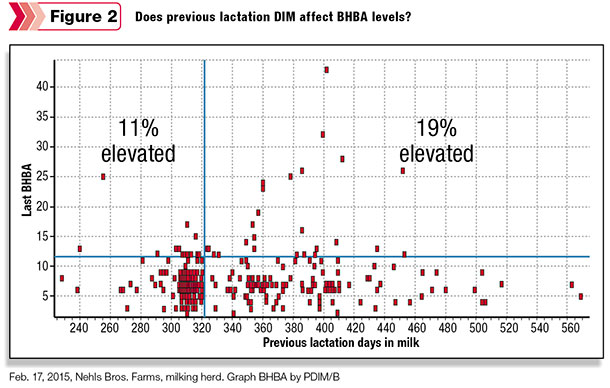 Among first-lactation heifers, the tendency is for those calving at greater than 24 months old to have almost double the risk of high BHBA (Figure 3). Upon freshening, animals that have been identified to be in these risk groups are automatically treated at three DIM with 300 cc’s of propylene glycol once daily for five days. 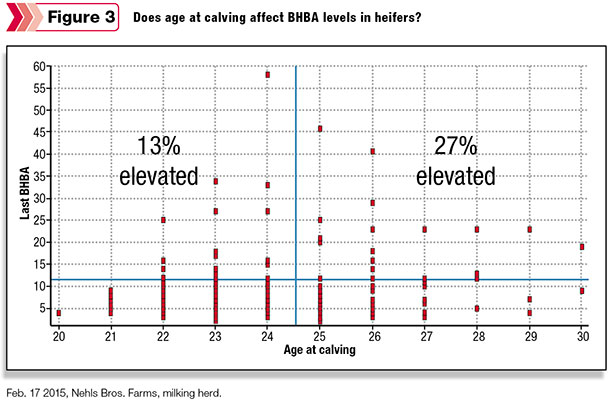 What are you going to doabout elevated BHBA levels?

If high BHBA levels and fresh cow metabolic disorders are an issue on your dairy, Barmore calls out a few areas to consider when looking at both the ration and management factors.

Barmore believes these additives are backed by research and documentation to support that they might be involved in energy management of transition cows.

“Ration can be the culprit,” Barmore says. “But I can tell you from personal experience that there are situations where the rations are spot-on and didn’t change, but BHBAs went up and when you dig into it, it’s something on this list.”

However, Barmore warns against making drastic ration or management changes simply based on numbers.

“Don’t overreact if things are going well,” he warns. “I think BHBA monitoring is a tremendous tool, but be careful that you don’t swing for the fence too far and start changing things just because you get some numbers that are a little high.” PD

Presented during the 2015 PDPW Business Conference.