The Innovation Center for U.S. Dairy’s seventh annual U.S. Dairy Sustainability Awards were presented during a ceremony at the Morton Arboretum in Lisle, Illinois, on May 16.

“This year’s winners exemplify how a drive to be economically viable, socially responsible and environmentally sustainable is at the heart of our dairy industry, from farm to table,” said Barbara O’Brien, president of the Innovation Center for U.S. Dairy. “Each winner showcases what is possible and how innovation and initiative can take a vision and make it a reality.”

Summaries of the 2018 award recipients follow. Additional details about award winners will be highlighted in future issues of Progressive Dairyman.

Learn more about the winners in this slideshow.

The McMahon family has operated E-Z Acres since 1957, when Richard and Shirley McMahon bought the 150-acre home farm at auction and started the dairy herd with eight registered Holstein heifers. Sons Mike and Pete McMahon purchased the farm operation in 1985 and expanded to its new facility in 1995. Today, the dairy herd consists of about 780 cows and 600 replacement animals.

E‑Z Acres is located in a very environmentally sensitive area. Seventy percent of the farm’s land base lies over a sole‑source aquifer providing water to approximately 23,000 people in the village of Homer and city of Cortland. The other 30 percent of land lies within the Skaneateles Lake watershed — one of New York’s Finger Lakes – which provides drinking water to the greater Syracuse area of nearly 240,000 people. In addition, any surface runoff ends up in Factory Brook, which flows into the Tioughnioga River, then the Chenango River, the Susquehanna River, and eventually, the Chesapeake Bay.

The McMahons have a strong commitment to natural resource conservation and environmental protection. They monitor multiple wells on the property to evaluate agronomic practices.

Other efforts include installing riparian buffers, practicing soil conservation and significantly reducing phosphorous usage. They were one of the first farms in the U.S. to practice precision feeding. In addition, through rigorous community outreach, they keep their neighbors informed about the safety of the local water supply.

The herd averages 85 pounds of milk per day per cow and has received the “Super” Milk Award by Empire State Milk Quality Council for 17 consecutive years.

Reinford Farms is a family owned-and-operated dairy farm that has been in business since 1990 when Steve and Regina Reinford moved to Mifflintown, Pennsylvania, with 57 cows, a tractor, plow and their four young children: Brett, Chad, Drew and Dove.

Today, Brett Reinford farms with his dad, mom, two brothers and sister. Together, they manage a 725-cow freestall dairy on 1,300 acres of cropland.

The Reinfords are advocates for environmentally sustainable dairy farming, implementing and promoting sustainable practices, and working to improve relations between consumers and farmers.

One of Reinford Farms’ unique efforts is their collaboration with local businesses and investment in innovative technologies to use their anaerobic digester to turn manure and food waste into renewable energy.

With a digester in place and a beneficial location, Reinford Farms found they were positioned to begin collecting food waste from their area’s grocery stores and food manufacturers. Over time, however, the process became more complicated and labor-intensive when the food waste contained more packaging.

To solve the issue, they personally financed a depackaging system that separates the food from its packaging, allowing cleaner food waste to be piped into the digester. Today, they work with 15 grocery stores and food manufacturing companies to recycle food waste.

The system is an open-top structure consisting of a layer of wood shavings, river cobble, geotextiles and drainage basins. An irrigation system delivers wastewater, which percolates down through the medias, thereby providing physical filtration. Biological filtration is also provided as the wood shavings are inoculated with an industry-specific mix of worms, microbes and bacteria. The worms burrow through the media in search of larger solids, aerate the media and create new channels for the water to travel through. As the worms digest, they excrete more microbes and bacteria, all of which work together to form a symbiotic and beneficial relationship as a “biofilm,” a robust layer of billions of colonies of microbes and bacteria that grows across all system medias, and captures, retains and digests contaminants.

Austin, his wife, Camille, and two children, Porter, 4, and Adeline, 2, recognize the importance of telling their story to consumers, especially on social media. From videos on Facebook and engaging photos on Instagram, the whole family helps to tell their farming story.

For more on Royal Dairy, read: Worms and wastewater: How farms are managing nitrogen with a unique system. 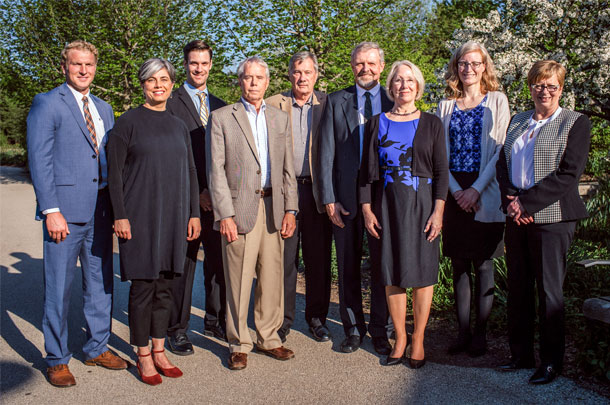 Kroger’s manufacturing division embarked on a division-wide effort to reduce landfill waste across all manufacturing operations, and the first Zero Waste project started in 2009 at an Ohio ice cream plant. By 2017, 33 of Kroger’s manufacturing plants had achieved and sustained Zero Waste for at least a year, with a 34th (and final dairy) plant achieving Zero Waste for the first time in 2017. In just a few short years, Kroger’s dairy manufacturing facilities have diverted more than 1.46 billion pounds of material away from landfill, and have uncovered more than $4.6 million in revenue from the purchase of the materials recovered for recycling. Kroger’s dairy processing plant collectively diverted more than 97 percent of waste from landfills in 2017.

These efforts have also generated new ideas and projects to reduce landfill waste and save cost, including Kroger’s current project that is reducing the plastic used in gallon milk jugs. In 2016, the company began rolling out a new lighter-weight milk jug in its dairy operations, using about 10 percent less plastic.

In 2017, Kroger announced its Zero Hunger | Zero Waste plan – a commitment to end hunger in its communities and eliminate waste by 2025.

Founded in 1909 as a farmer-owned cooperative, today, the Tillamook County Creamery Association (TCCA) has 800 employees and offices in three Oregon locations – Tillamook, Portland and Boardman. Guided by the “Dairy Done Right” philosophy that everyone deserves real food that makes them feel good every day, they have earned top awards in their five dairy product categories: cheese, ice cream, sour cream, yogurt and butter. More than a million visitors flock to the Tillamook Creamery each year to experience the brand up close and sample award-winning Tillamook products, now sold in all 50 states.

However, TCCA does more than provide jobs and delicious dairy products. Engaging with local communities, TCCA identified three areas of greatest need: agricultural advocacy, food security and the health of children. To address those needs, TCCA set goals that would set them up structurally and financially to provide socially innovative and sustainable solutions, including investing 2.2 percent of TCCA profits in those key areas. TCCA established a cross-functional Community Enrichment Committee to encourage voluntary participation and monetary donations in community programs.

PHOTO 1: The Reinford family of Mifflintown, Pennsylvania, received an Outstanding Dairy Farm Sustainability Award as part of the Innovation Center for U.S. Dairy’s seventh annual U.S. Dairy Sustainability Awards celebration, May 16. The Reinfords recycle 6,000 to 12,000 gallons of food waste daily from area grocery stores and food manufacturers. The dairy installed a depackager that separates the food from its packaging, allowing cleaner food waste to be piped into the farm’s digester.