Can cattle be finished on pasture?

The two of us had just started raising stocker cattle together in central Kentucky and had also been involved in an extension program helping producers get started with pasture-finished beef production.

Our breakthrough came when Fred Martz, professor at the University of Missouri specializing in beef cattle, graciously hosted us on visits to pasture-finishing operations he had been working with in his state.

We got to see how theory and practice actually matched up and were encouraged enough by what we saw that we decided to keep four steers (which would have otherwise been sold that fall) and hold them for an additional year to see how well they would finish in Kentucky.

That first year in 2012 had mixed results. We learned quite a bit from that first season, however, and adjusted our management. The following year we had impressive results: We finished six animals, four we direct-marketed, and two we sold to our processor. The average live weight was 1,245 pounds; the average carcass weight was 776 pounds, which equated to an average dressing percentage of 62 percent.

All four of the animals that were graded (the ones direct-marketed) hit Low Choice marbling grade. Since then, our dressing percentage has averaged right around 60 percent, and we are consistently achieving 50 to 60 percent Low Choice marbling grade. This has been done with a 100 percent pasture and hay feeding protocol. We are not on row-crop soils. The farm has medium to shallow soils and is representative of typical livestock farms in Kentucky.

So to answer the initial question: Yes, beef cattle can definitely be finished efficiently on pasture, but with the caveat that it will take good management skills. Pasture management in particular is critical. Typical pasture management that will work adequately for a cow-calf operation will not work well for finishing.

However, if you can raise stocker cattle purely on pasture and average near 1.5 pounds per day gain for an entire grazing season, you should be able to make the transition to finishing without too much trouble. We have found our finishing steers (yearlings) gain about 0.25 pound per day more than our calves do during the grazing season.

While I would never advise someone to try to finish cattle on a pure or mostly fescue pasture, a fescue-based pasture that has a good mix of clover, bluegrass and other forages can work well if managed correctly. The more predominantly fescue grows in the pasture, the more selective you will have to let the finishing animal be.

If you are trying to finish cattle on pasture and are located in a region devoid of Kentucky 31 fescue, consider yourself lucky. However, pasture and grazing management are generally more important than forage species.

It will also take good planning skills as well as patience. Pasture-finished cattle will not grow nearly as quickly as they would in a feedlot, and if you try harvesting one at 16 to 18 months old, you will be disappointed with both the quantity of usable meat as well as the quality of that meat. (It will have very little marbling.)

These are for Kentucky conditions, and other regions may have different optimal timeframes. In particular, the deep South can grow extremely productive and high-quality winter annuals and will have different finishing windows when using these forages.

If you are keeping calves until they are 24 to 28 months old, winter feeding will be necessary. Our calves gained somewhere between 0.4 to 0.8 pound per day over the winter. While this is definitely not going to put on marbling during the winter months, our strategy is to put on both the bulk of the gains and the marbling when it is cheapest, during the grazing season. There is definitely something to be said about the power of compensatory gain.

The only study I have been able to find that evaluated growing cattle over two pasture seasons was in the 1939 Yearbook of Agriculture (USDA).

This study found although the difference in gains between the high and low winter treatments was 130 pounds, the final weight difference at the end of the second grazing season was only 37 pounds. Thus, the cattle that gained slower during the winter gained 72 percent of the difference back during the two pasture seasons. It is much cheaper to put on gains while on pasture.

Local markets exist for both a grain-on-grass and pure pasture-finishing approach. Both typically pay nice premiums over conventional feedlot-finished beef. With a grain-on-grass approach, you can get by with lower-quality pasture and still get as good or better gains. You will also be able to finish during times of the year that would be difficult with a pure pasture-finishing approach.

For many cattlemen, this may be the best option. Your markets will play the biggest role in determining which approach is needed. If customers mainly want a “local” product antibiotic- and hormone-free and are fine with some grain feeding, then the grain-on-grass approach may work best. 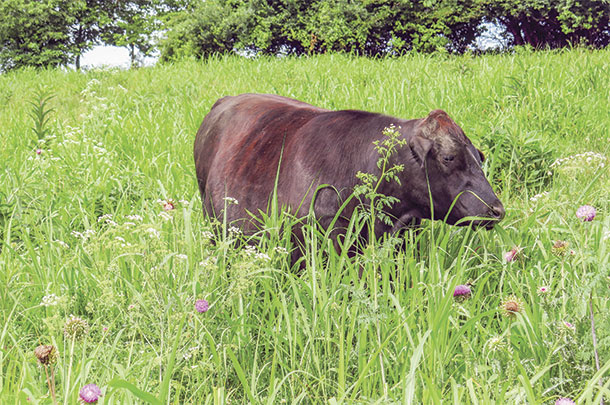 Marketing is usually the biggest hurdle for most finishing operations. A wholesale market where you sell finished animals to a processor are sometimes available (at a reduced sale price) but, most often, you will have to sell your product as freezer beef (i.e., quarters, halves or whole) or retail (by the cut). (Refer to the publication at the end of this article for details on marketing.)

There was a lot of volatility over the last seven years with calf prices and fat-cattle prices, so determining profit based on rising and falling markets where you keep animals for two years can be misleading. Holding the market constant (assume animals were hedged on the market they were bought on), profitability has been at least twice the profit per animal per year (adjusted for the longer period held and additional acreage) compared to our stocker cattle.

This is assuming selling directly to our processor, where we don’t have to do any marketing. The profit potential on the direct-marketed animals is considerably higher, but you also need to weigh this with the additional time, effort and inevitable headaches you will have dealing with customers.

One of the biggest impacts on profitability is having a fully finished animal. The most common mistake I see is trying to finish a spring-born calf on pasture before its second winter. It will be about 18 months old and will likely be 900 to 1,000 pounds.

Yes, you will have additional costs to winter one more season and then keep on pasture for three more months, but that same animal will weigh around 1,250 pounds and will generally yield 150 additional pounds of wrapped meat. If you are selling that at or near $5 per pound, you will be far ahead profit-wise by waiting.

Harvesting an 18-month-old steer on pasture is like cutting a 16-inch-diameter red oak with a healthy crown. If you waited another 10 to 15 years, it would be 20 inches in diameter and potentially veneer quality. You gain in both volume and quality with both the tree and the steer. The main difference is: You only have to wait another six to seven months with the steer.

Unfortunately, I see the former happening time and time again. One of the most important attributes necessary to be successful in finishing cattle on pasture is learning to work at nature’s pace rather than a self-imposed deadline.

PHOTO 1: Too many pasture-finished cattle are harvested too early, before profitability is at its highest peak.

PHOTO 2: While local markets exist for both a grain-on-grass and pure pasture-finishing approach, marketing is often the biggest hurdle for most finishing operations. Photos provided by Greg Halich.

A joint University of Kentucky and University of Missouri Extension publication, “Producer’s Guide to Pasture-Based Beef Finishing,” is a 45-page guide that goes into much greater detail on pasture-based finishing and is available online.

You can use the “Pasture Finishing Worksheet for Beef Cattle” tool to help plan your production system – available online.

Greg Halich is an associate extensionprofessor in agricultural economics at the University of Kentucky. Email Greg Halich.