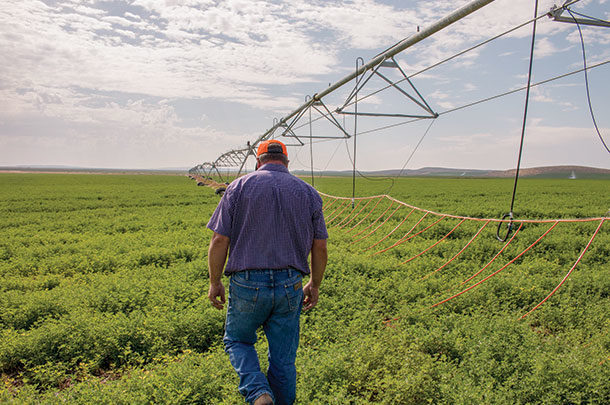 Thanks to modern irrigation techniques, the alfalfa fields that spread through the valleys and over the hills break up the monotony of dry yellow hills with patches of vibrant, well-watered green.

In Burns, like many other places around the country, water is a hot commodity. Jay Nelson, owner of Suretap Springs, an irrigation business that deals in anything from sprinkler pipe to cattle waterers, pays close attention to the water needs of producers in his area and constantly looks for ways they can make their dwindling water supply stretch.

After researching more economical irrigation methods, Nelson decided to explore drip irrigation. “The water table in the valley was way down, so we were trying to conserve water, and I thought, ‘Everybody in the world is trying drip irrigation; maybe Oregon needs to start,’” Nelson says. 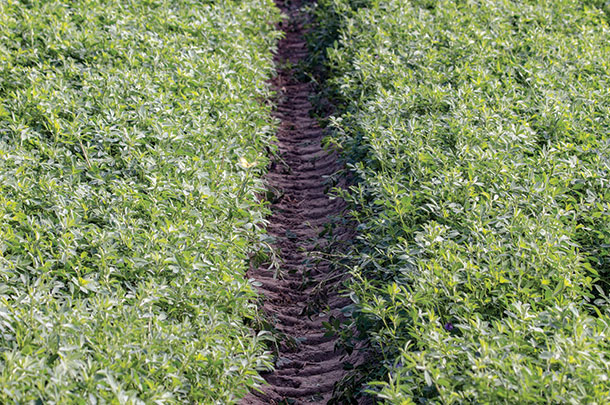 Bryan Lasich, manager of Childers Hay Ranch near Burns, came across an article about drip irrigation in a magazine and contacted Nelson, wanting to try it out on his fields. “A lot of the people in the valley thought I was crazy,” Lasich says. “Jay thought I was crazy last year when I approached him about it.” After a little more research, Nelson and Lasich decided to experiment with mobile drip irrigation.

Monty Teeter, CEO of Dragon-Line, has been in the irrigation business for almost 45 years, 25 of which he spent in the drip irrigation sector. He says drip irrigation has been around for over 50 years, and improvements have taken a while to develop. “Sometimes technology catches up with ideas,” he says. For example, his idea for the mobile drip irrigation system spent nine years in development and production before hitting the market three years ago.

Teeter operates out of several dealerships in western Kansas and eastern Colorado, where water is also in short supply. “Wherever people are short on water and want to control precision, they use drip irrigation.”

Teeter’s drip system is designed to work on a center pivot. An 8-foot flexible hose connects the dripline to the pivot. The orange dripline tubing is made of high-quality polyethylene resin. The water emitters are spaced either 12 or 6 inches apart and are pressure-compensating and self-flushing. 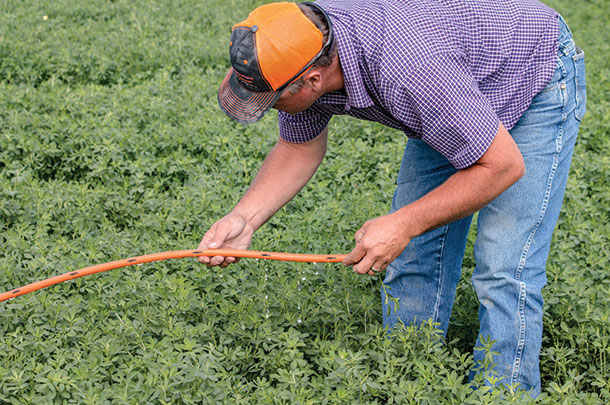 The emitters put out 2 gallons of water per hour. The hose is dragged along behind the pivot and delivers the water directly to the ground, making irrigation both more efficient and more effective. The hoses are in what Nelson calls a triangle formation.

The hoses on the outer end of the pivot start long and get progressively shorter moving toward the pivot hub. The hoses are spaced 2 feet apart and are also stiff enough pivots can reverse without kinking or tangling them.

“I’ve been doing irrigation since 1989, and everybody has always designed the sprinkler to put out 7-and-a-half to 8 gallons per acre, but that’s because the sprinkler is 5 or 6 feet in the air, and it takes that much water just to get to the ground,” Nelson says. “With the drip irrigation in one field, the moisture goes down 30 inches. If you hop the fence and go to the neighbors on a pivot that’s sprinkling at 900 gallons per minute, the moisture will only go down about 14 inches.”

Drip irrigation is also designed to help water penetrate even the tightest-packed soils. At the Childers Hay Ranch, Lasich deals with two different types of soils – loose sandy soil and tightly packed clay – and the slow, uniform spread of the water helps the ground receive it more easily. “Even on the tighter soils where we don’t do normal sprinkler applications, we get big ponds and, with the drips, there are no ponds; the ground just accepts the water,” Lasich says.

Lasich says the one thing every producer must do before installing drip irrigation is get a water test. “We found this out the hard way,” Lasich says. “It wasn’t really mentioned to anybody we should do it, so we put the filter screens at the center, but we were finding we have very fine sand in the water, and the 200-micron screen would just plug within five minutes, so Jay and Monty did some research and brought the sand separation filter in, and there aren’t any more problems. It holds everything in. Other than that, there isn’t a great amount of maintenance.” 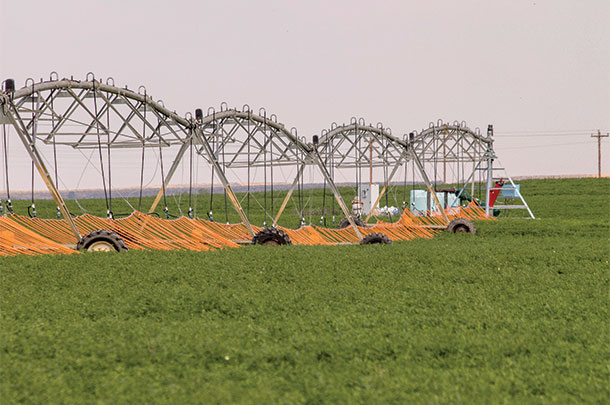 Nelson says even if the hoses get plugged for some other reason, it is a simple process to clean them out again. The hoses come with a cap on the end. If particles of sand or dirt or anything else get stuck in the hose, simply remove the cap, kink the flex hose at the head of the line, and the water pressure will clear out the debris. The same practice works with the emitters.

Lasich says wildlife don’t tend to bother the hoses – except for the occasional coyote. “They like to come out and play tug of war,” he says. “The pups are really bad. On one pivot out back, early this spring when the pups were running around, we replaced over 30 lines they would literally chew off, so we would have to walk all over the field trying to find them, and some we never did find till we swathed over them.” They were able to splice the hoses back together, so the damage was not irreparable.

“We thought last year they were just thirsty, so Bryan put water troughs out there and different things, but it didn’t do a thing,” says Nelson. “They were just chewing on them, like puppies.”

Aside from coyotes using the hoses for chew toys, the hoses are quite durable. Nelson says winter storage is very simple. The drip lines just need to be drained, gathered up and tied to the center cable on the pivot with baler twine or zip ties. Lasich says he even left them down on the ground one winter, and they survived the winter just fine.

Conserving water isn’t the only benefit a mobile drip irrigation system provides. “We started off just trying to save water, but now we’re in areas where people have plenty of water, and we help address issues like wheel tracks, runoff, crusting, sealing and compaction issues, keeping the plants dry; we are solving so many other problems we didn’t plan on originally,” Teeter says.

PHOTO 4: A Dragon-Line pivot stands ready for use, complete with filtration system at the center. Photos by Carrie Veselka.