Tifton 85 for the horse hay market at Winona Lakes Ranch

Their herd consists of three Tennessee Walking horses, a Palomino Paso Fino, two mustangs, three Standardbreds, a 28-year-old quarter horse and a “stately” white quarter horse. Some of their animals are rescues obtained through the local sheriff’s department. 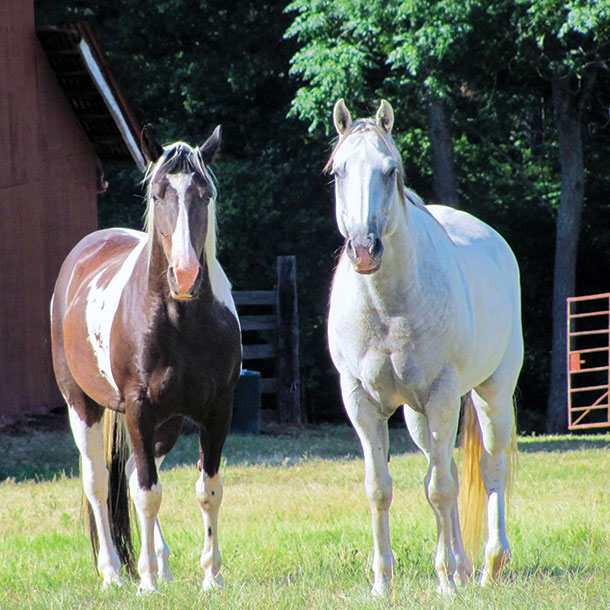 The Jameses also raise longhorn cattle and provide wildlife habitat for a wide range of wildlife drawn to the natural lakes on their property created by a network of underground springs.

“Our horses enjoy a great life,” Larry says. “Several pastures adjoin our barns and the hay rings are filled with premium quality Tifton 85 hay produced here on the ranch.

Tifton 85 is what some forage experts call “the best” of many F1 hybrids coming from the cross of South Africa’s PI 290884 and Tifton 68. Tifton 85 is highly digestible, at over 65 percent digestibility. Protein levels can be more than 17 percent, the forage is taller, has larger stems, broader leaves and darker green color than other bermudagrass hybrids. 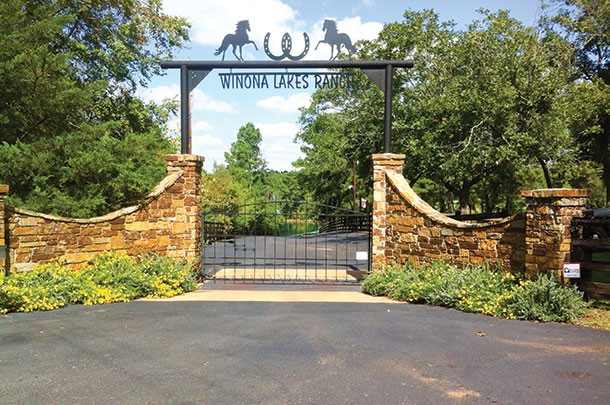 Tifton 85 has large rhizomes, crowns and large, rapidly spreading stolons (horizontal plant stems or runners). Although some might wonder about the larger leaves and stems, they are more digestible than comparable bermudagrass varieties.

In two three-year replicated small-plot tests conducted in 1985 through 1989, Tifton 85 produced an average of 26 percent more dry matter which was 11 percent more digestible than coastal bermudagrass in duplicate 2-acre test pastures. For the Jameses and their customers, the quality of the hay is a major asset.

“Because Tifton 85 has thicker leaves, it contains between 16 and 18 percent protein,” Larry says. “A 14 percent protein content is enough for horses. We have to be careful that our horses don’t gain too much weight by eating the hay.”

Larry A. Redmon, Ph.D., Regents Fellow, professor and associate head for extension programs at Texas A&M AgriLife Extension’s Department of Soil and Crop Sciences, says Tifton 85 has excellent nutritive value with a higher level of digestibility than other bermudagrass varieties.

“It’s one of our better varieties hay producers grow, bale and sell to horse owners across several states,” Redmon says. “All the growers agree it’s an excellent horse forage and hay.” 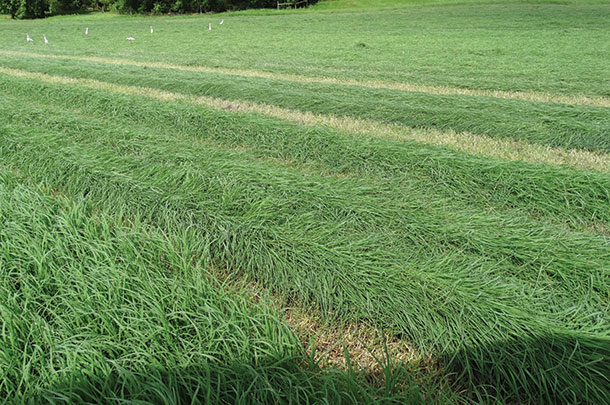 One of Tifton 85’s drawbacks is its relative lack of cold tolerance. For producers, bermudagrass is a warm-season, southern forage.

Even though Tifton 85 has been around for some 10 years, there are things about managing the forage that are unknown. Researchers like Redmon recommend that producers desiring to establish Tifton 85 begin their planning process a year in advance of planting the forage.

The first step in establishing Tifton 85 is locating a reliable sprig or top supplier. Sprigs should be dug in between March and mid-April, at the season’s first green-up and when temperatures are in the mid to upper 50s.

Sprigs are planted no deeper than 3 inches and can be planted as late as the end of April or first of May. Sprigs should be kept moist and planted the same day they are dug.

Ideal Tifton 85 tops are at least six weeks old, range from 18 inches to 24 inches tall and have at least six nodes. Tops should be planted as soon as possible after harvesting and shouldn’t be allowed to wilt. It’s essential that soil is firmly packed after planting and appropriate weed control strategies are implemented.

A soil analysis should be taken well ahead of the anticipated planting date to identify the need for limestone application since it takes several months and moisture for the limestone to take effect. The limestone should be applied during seedbed preparation to effectively incorporate it into the soil and raise soil pH.

Any persisting perennial grass should be spot sprayed with a 1.5 percent glyphosate solution. Producers might consider planting a small grain or ryegrass on the site to reduce winter soil erosion. The crop could also be grazed by livestock over winter.

“We hired a crew to plant our sprigs,” James says. “They use specialized equipment to properly plant and fertilize the sprigs. Our job then was to manage weeds. Tifton 85 requires a lot of water and our underground springs and wells on the ranch supply our irrigation systems whenever necessary.”

Well-drained soil with good moisture to a depth of 2 feet or more is an ideal environment for establishing Tifton 85. If possible, planting should be timed for completion just prior to a light precipitation event.

A heavy roller is recommended for packing the soil following planting. Spraying immediately with 2 pounds per acre of 2,4-D will help suppress germinating weeds. Typically, a second 2,4-D application is required within 25 to 30 days. Once Tifton 85 is established, its vigorous growth habits provide natural weed suppression.

“About three months after we planted the sprigs we harvested a light cutting from our first Tifton 85 crop,” James says. “One key to producing quality Tifton 85 hay is baling it when the humidity level is between 11 and 16 percent.

That’s important because the humidity holds the protein in the hay and retains a proper texture for it. Our balers display humidity conditions, so if humidity levels are too low or too high, we stop baling until conditions are acceptable again.”

After each cutting, because Tifton 85 is so tall and thick, the Jameses use a tedder two consecutive days to help dry it out, aiming to bale it before it rains. It takes about five weeks for the field to regrow and be harvested again.

The Jameses sell most of their hay to repeat buyers who commit to purchasing a minimum of 200 bales annually. Their hay also goes to large feed stores catering to customers who seek the highest horse-quality hay.

“Those feed stores often repackage our hay into square bales of varying sizes,” James says. “Currently we produce a yearly minimum of some 2,000 net-wrapped bales, each weighing 1,200 pounds. We aim to harvest about 3,000 pounds per acre at each cutting.”

To ensure that they can harvest their hay in a timely and efficient manner, the Jameses use two Kubota 126 cab tractors, two Massey Ferguson tractors, two commercial Vermeer balers with moisture readers, two cutters, two tedders and a granular fertilizer applicator.

“Whoever suggested that ‘watching the grass grow’ was slow moving and painfully boring obviously never grew Tifton 85,” James says. “We produce three full cuttings from June through September. Some years we get a fourth cutting.

Each year, before hay season begins, we test our soil to determine if we need a lime application to reach optimum pH. Each cutting cycle begins with application of granular fertilizer containing nitrogen, phosphorus and potash. 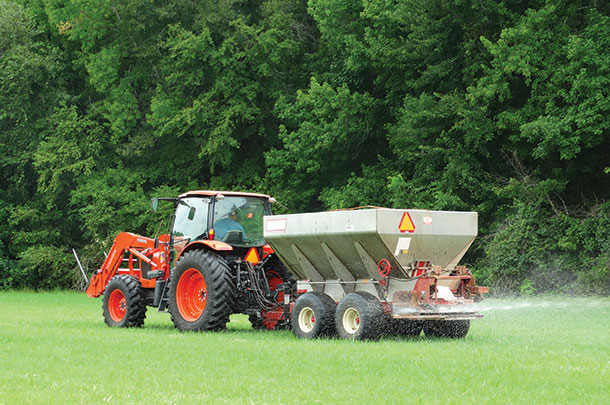 We’re proud to produce a nearly weed-free product. We don’t graze either cattle or horses in any of our six hay fields.”

Bales the Jameses retain are immediately moved into their barns. Most customers – some of whom pick up their own bales – immediately store the bales inside too. 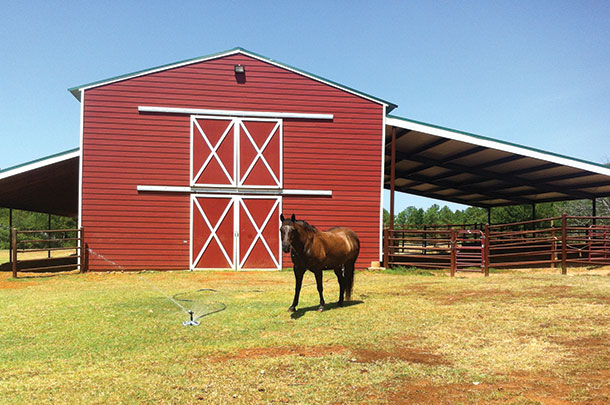 “With proper storage, Tifton 85 retains its beautiful green color and nutritive value extremely well after baling,” James says. “Fertilizing is done after bales are removed as part of our effort to do everything we can to produce safe, nutritious forage.

We strive to keep our hay prices the same each year regardless of weather conditions so customers can depend on reasonably priced and high-quality hay every year.”

PHOTO 1: Winona Lakes Ranch sells most of their hay to repeat buyers who commit to 200-plus bales and to feed stores who often repackage the hay into square bales of varying sizes.

PHOTO 4: The Jameses also raise longhorn cattle and provide wildlife habitat for a wide range of wildlife drawn to the natural lakes on their property created by a network of underground springs.

PHOTO 5: Before the hay production season, soil tests determine the level of lime needed to reach optimum pH for Tifton 85. Each cutting cycle begins with an application of granular fertilizer.

PHOTO 6: Bales the Jameses retain are immediately moved into their barns. Most customers – some of whom pick up their own bales – immediately store the bales inside too. Photos courtesy of Winona Lakes Ranch.