It has been a good upgrade to the manual variable-rate system they started using two years ago.

“We wanted to do variable rate because we knew we were underapplying on some acres and overapplying on others,” Mike Hinz says. “We also wanted to stretch our manure supply if possible so we can apply it to all our acres.”

The Hinzes finish steers and hogs on their farm near Wood Lake, Minnesota, and grow 1,800 acres of corn and soybeans. A custom applicator handles the liquid hog manure. The Hinzes apply the steer manure from the feedlots and bedding pack to the cornfields. 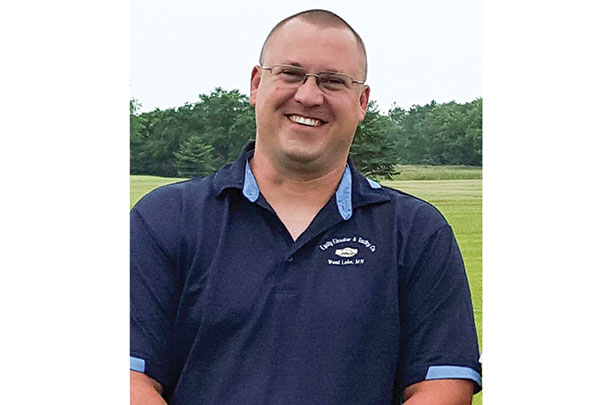 This year, Mike Hinz thinks they will reach the goal of having enough manure for all their acreage. They have invested in a system that combines the by-acre nutrient prescriptions from their agronomist with the live weight of the material being handled.

Starting with the scales

For about six years, Hinz was applying steer manure using a spreader equipped with digital weigh scales. He liked knowing he was accurately applying 10 tons of manure per acre, but he thought he could do better.

“Using a scale was better than just going out there and guessing what you were doing,” Hinz says. “It was better than nothing, but we weren’t able to alter application rates for each acre.”

Two years ago, Hinz connected a GPS unit to the scale on the spreader so he could change the application rate based on the nutrient needs of each acre. He took the prescriptions his agronomist wrote based on soil, manure and plant tissue samples, and he entered those prescriptions manually into the GPS. The results were precise, but the process was slow going.

“With the GPS, we had to put in how much a cubic foot of manure weighed, and there were a lot of calculations and variables; you had to keep tweaking,” Hinz says.

Despite the work, moving to variable-rate application had big payoffs. In one 110-acre field, for example, the prescription called for between 4 and 22 tons of manure per acre. Those were big swings from the straight 10 tons per acre he had been applying.

When the Hinzes added the GPS unit, they also added automatic steering. This tool keeps the applicator from having to eyeball the edge of the last pass with the spreader and hope he doesn’t overlap or leave gaps with the next pass.

“The manure spreader can throw as far as 60 feet, but the spray kind of feathers out,” Hinz says. “You can’t really see the line where you spread when you’re throwing something 60 feet. If you’ve got your 60 feet programmed into the auto-steer, you know you’re being accurate.”

The most recent improvement is the addition of an automated control system to the weigh scale on the spreader. Hinz no longer has to type in the prescriptions for each field from the agronomist; they are automatically uploaded into the software.

In addition, this new system provides greater spreading rate accuracy when spreading manure of varying densities, whether it’s from the feedlot or from bedding pack. The control unit collects information from the scales during application and uses the data to alter the spreader’s apron speed.

“It takes all those calculations and does them itself,” Hinz says. “That saves time and fertilizer costs. We’re not necessarily purchasing less anhydrous, but we are not buying phosphorous or potassium anymore. And the amount of manure we have is enough to cover all of our ground now.”

The variable-rate system is also working well for the Hinz Farms’ custom lime application business. Lime application is a fairly new practice in southwest Minnesota, and the need varies greatly from field to field and acre to acre.

A 160-acre field might only need lime on 60 acres, Hinz says as an example. Before variable-rate application, the Hinzes were using the scales on their spreader to apply 3 tons of lime per acre.

“Now that we are using variable rate, we are putting on between 1,000 and 6,000 pounds on spots across fields,” Hinz says. “Now that we can be more precise, our customers are happier, and we’re happier.”  FG