Dave Natzke
The Dairy Revenue Protection (Dairy-RP) program is hitting a milestone date in its six-month existence: On April 22, the USDA’s Risk Management Agency (RMA) will announce average prices used to calculate potential indemnity payments for milk revenue covered during the first quarter of 2019, according to Robin Schmahl with AgDairy LLC.
Dave Natzke

Under Dairy-RP, the first quarter of 2019 ended on March 31. The USDA RMA has about 20 days after the end of the quarter to announce milk class and component prices and milk volumes used in revenue settlements. The USDA's monthly Milk Production report is released April 22. After the prices and volumes are announced, approved insurance providers (AIPs) then have 10 days to notify their Dairy-RP clients if they are eligible for an indemnity payments based on the coverage selected.

Producers must then provide the AIPs with actual milk production figures for the quarter, and the AIPs then have 30 days to make indemnity payments, said Schmahl, a full-service commodity broker and Dairy-RP insurance agent located at Elkhart Lake, Wisconsin.

Based on that schedule, a dairy farmer who purchased Dairy-RP coverage for the first quarter of 2019, and was eligible to receive an indemnity payment, could likely see a check in early June, depending on how promptly the required documents have been completed.

Dairy-RP sales have been slowing in recent weeks as producers hold out to maximize potential revenue coverage in distant quarters (Table 1). Milk volume covered during the first three weeks of April has been the lowest since the program was launched on Oct. 9, 2018. 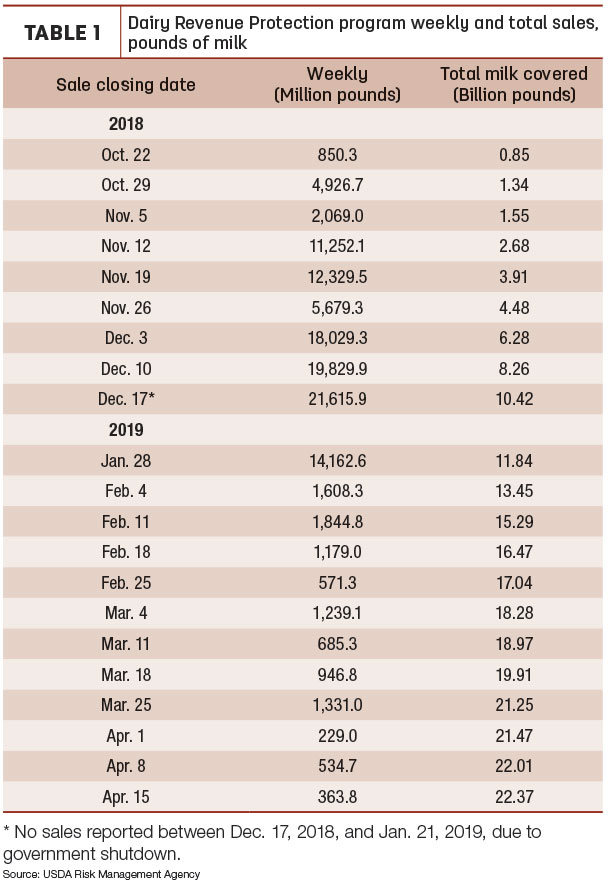 “For now, the potential for higher milk prices is putting Dairy-RP on the back burner,” Schmahl said. “Some producers had also written endorsements for multiple quarters earlier, reducing the need to add endorsements now.”

Producers seeking Dairy-RP coverage can purchase endorsements through authorized crop insurance agents, up to five quarters into the future. Under Dairy-RP, dairy producers can select coverage at 70 to 95 percent (in 5 percent increments) of expected quarterly milk revenue (production times price).

Dairy-RP quarterly endorsements are available for sale until about the 15th of the month preceding the quarter to be covered. For example, the sales period to purchase revenue insurance on second-quarter 2019 (April-June) milk production closed on March 15.

Even if they don’t purchase Dairy-RP coverage immediately, Schmahl urges producers to place floors under milk prices when futures prices move above their cost of production.

“The past three years we have seen this same pattern where milk prices increased from mid-March through mid-May and then fell off significantly. It may not be quite the same this year, but the risk is there,” Schmahl warned.