Bob Collier
In his fifth edition of
Bob Collier
Dairy Cattle and Milk Productionpublished in 1939, Dr. Clarence Eckles reported that the “ratio between the human population and the number of cows in the United States had remained essentially the same since 1850.” At that time, there were 36 million dairy cows in the U.S. producing an average of 8,700 pounds of milk per lactation.

As shown in Figure 1, that relationship changed dramatically over the last half of the 20th and first half of the 21st century. Today, there are 9 million dairy cows producing 23,200 pounds of milk per lactation. This rapid increase in milk yield per cow made it possible to meet the increasing demand for dairy products of an expanding human population with a smaller number of cows while reducing the carbon footprint of dairy animals on our environment by over 60 percent. 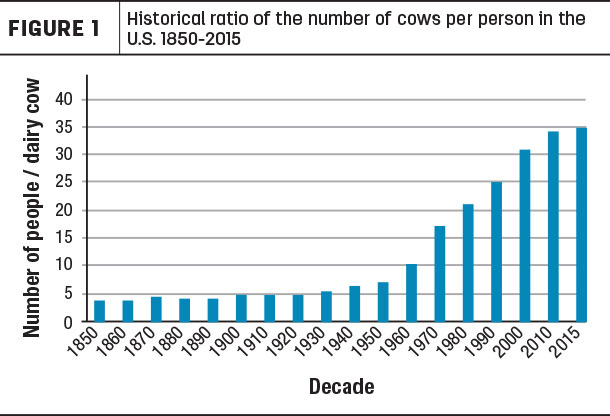 This dramatic increase in milk yield per cow has led some to question whether or not high-producing cows are more “stressed” because of the increased productivity. The answer is that stress always reduces milk yield because of the increased maintenance cost caused by the stress, which requires that more energy is devoted to maintenance and less to production. Cows can only reach high levels of productivity when stress levels in their environment are decreased. It is therefore a paradox to say that high-producing cows are more stressed. The real issue is level of management. When the well-being of high-producing cows is properly maintained, they attain their full genetic potential. Thus, high-producing cows have increased management requirements in order to meet their metabolic and health needs.

One issue often overlooked is the increased requirement of high-producing cows to dissipate a much higher heat load in order to maintain normal body temperature. For example, a cow producing 80 pounds of milk per day is producing 37,500 more kcal of heat (or 148,700 BTUs) per day than a cow producing 30 pounds of milk. Dissipating this heat load equals the cooling capacity of a medium-sized window air conditioner that is providing 6,000 BTUs of cooling per hour. Failure to meet this need results in increased body temperature and heat stress of high-producing cows.

This issue becomes critical when the environmental temperature around animals suddenly changes with little or no opportunity for animals to acclimate to the higher temperatures. This was dramatically demonstrated in California during the summer of 2006 when a sudden heat wave resulted in $1 billion in losses of animals and milk to the California dairy industry in only 10 days.

In addition to higher production, the dairy cow of today is a bigger animal, weighing on average 300 to 500 more pounds than lower-producing cows from the last century. These larger animals have less surface area per unit of bodyweight to dissipate their heat load since body surface only increases to the three-fourth power relative to bodyweight. Thus, we have a bigger cow that is producing much more heat and has less relative surface area to dissipate that heat load compared to smaller animals of the past. 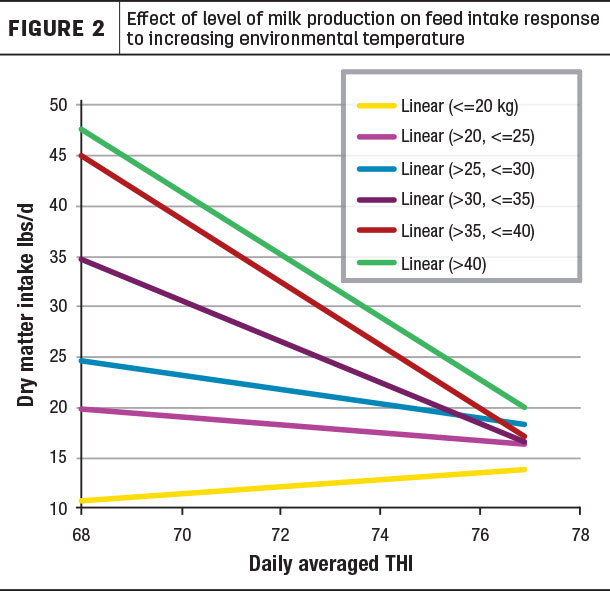 An additional issue related to heat stress on dairy cows is the changing climate. All of the current 14 climate models utilized by the Intergovernmental Panel on Climate Change agree that the earth’s average temperature will rise 3 to 7ºF over the next 100 years. More importantly, the incidence of extreme weather events will increase. The extreme weather events pose the greatest risk to the dairy industry, as witnessed in the catastrophic losses associated with the sudden onset of extreme heat in California in 2006.

However, the increase in average heat production per cow due to increased milk yield over the same time period will increase heat load on animals two to three times more than the proposed change in climate. This fact requires significant increases in cooling requirements of dairy cows either by altering the environment around the cows or increasing the cow’s own ability to cool herself. However, current mechanical cooling systems are operating at near maximum capacity, and both the cost of water and electricity continue to rise.

The objectives of intensive livestock systems are to take of advantage of scale effects to maximize profitability, provide a uniform thermoneutral environment and consistent nutrition in order to maximize production output and to reduce impacts of adverse environmental conditions. The use of intensive livestock systems is increasing and will continue to do so for the immediate future because they are essential to achieving increases in animal productivity. However, proper construction and management of these systems present several challenges to producers, who must consider several factors including management of the microenvironments inside the facility, maximizing efficiency of labor, capital and nutrients required, as well as waste disposal in the form of waste water and manure.

In modern dairy facilities, the objective is to achieve consistent high milk production, feed efficiency and reproductive efficiency while maintaining the health of the dairy cow. Currently, alleviation of thermal stress conditions employs two main strategies: reducing heat load on dairy animals and maximizing heat loss from dairy cows. In the future, the dairy industry will need to employ cooling systems with lower electrical and water requirements (passive cooling systems) and employ genomics to improve the cow’s ability to cool herself.

This is the first article in a two-part series.