Cropp said he was more optimistic than current Chicago Mercantile Exchange (CME) futures prices reflect. He expects exports to improve, with domestic demand remaining “decent.” With international milk production also slowing, both Cropp and Stephenson see milk price improvements in the second half of the year.

“Normally, you can handle about 1 percent growth in production with domestic demand,” Cropp said. “With production at this level, and exports, we have to have some strength in prices.”

The USDA, still catching up on reports following the government shutdown, is set to release final 2018 milk production data on March 12.

The National Milk Producers Federation (NMPF) filed a citizen petition with the FDA outlining a labeling solution to the use of dairy terms on nondairy products. FDA closed a public comment in late January and is considering the input to formulate use of dairy terms and other food labeling rules.

“The FDA comment docket gave us the chance to explain why there is a compelling need to resolve this labeling issue to address consumer confusion over nutritional content,” said Tom Balmer, NMPF executive vice president. “This petition lays out a constructive solution to the false and misleading labeling practices existing in the marketplace today and provides clear, truthful and understandable labeling options for marketers of plant-based imitation dairy products.”

“Marketers of plant-based foods that are designed to resemble standardized dairy foods actually have several labeling options under current FDA regulations, as we point out in this petition,” Balmer said.

The NMPF petition notes that any manufacturer not wishing to use modifiers such as “imitation,” “substitute” or “alternative” may simply eschew the use of dairy terms altogether – an approach that’s already common in the rest of the world and practiced by some companies in the U.S., including Chobani, Trader Joe’s and Quaker.

“Our approach does not advocate for any so-called “bans,” Balmer said. “It simply relies on proper disclosures that allow for appropriate, truthful, nonmisleading messaging. In the end, products that are ‘milklike’ or ‘yogurtlike’ are not actual milk or yogurt – and the nutritional distinctions are critical to informed consumer decisionmaking. That’s what our petition is all about.”

Fourth-quarter 2018 U.S. milk production was up only 0.5 percent from the same period in 2017, the lowest year-over-year growth for any quarter in five years. While the milking cow herd has become more efficient to allow for modest production gains, the report reflected continued herd contraction as the tough margin environment is prompting more producers to cull cows.

Early February feed markets continued to be subdued, although the USDA announced China had committed to purchasing an additional 10 million metric tons of U.S. soybeans, which could pressure soybean meal prices higher.

MPP-Dairy margin dips below $8 per cwt

The combination of a lower milk price and higher feed costs resulted in a national average milk income over feed cost margin of about $7.85 per cwt in December, the smallest margin since August. That means MPP-Dairy participants insured at the $8 margin level will see an indemnity payment of about 15 cents per cwt on their milk marketings.

Class I base price inches closer to $16

The Federal Reserve board has taken a pause on interest rate hikes, but left doors open for possible increases in the months ahead. The board’s Federal Open Market Committee meets again on March 19-20.

• Kansas City: Interest rates on all types of agricultural loans rose, but at a slower pace than other benchmark interest rates. In fact, the spread between variable rates charged on farm loans and the prime lending rate has narrowed recently, reached the lowest margin since 2007, as farm loan interest rates have been slower to rise. In addition to placing downward pressure on farmland values, higher interest rates also have increased financing costs for some farm borrowers, but only modestly.

• Chicago: As of Jan. 1, 2019, the average interest rates for farm operating loans (6.07 percent) and feeder cattle loans (6.13 percent) were at their highest levels since the second and third quarters of 2010, respectively. The average interest rate for agricultural real estate loans (5.61 percent) was last higher during the second quarter of 2011. About 44 percent of the survey respondents reported their banks tightened credit standards for agricultural loans in the fourth quarter of 2018 relative to the fourth quarter of 2017; 56 percent reported their banks kept credit standards essentially unchanged. Some bankers linked financial difficulties to pressures from higher agricultural interest rates. 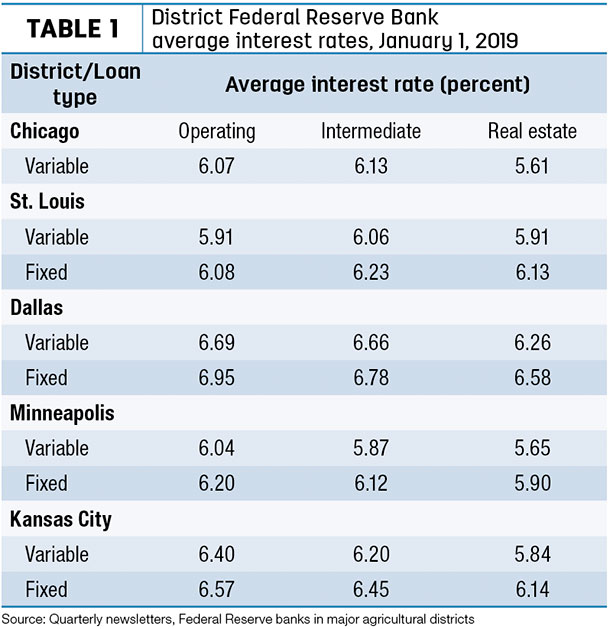 A new USDA export outlook forecasting higher U.S. dairy exports in fiscal year 2019 (FY19) is mixed news: The increase will be due to higher global dairy prices, which boosts value. Volumes of U.S. dairy products moving into export markets are expected to decline.

U.S. exporters sold products valued at about $5.6 billion in FY18. Due to the mixed nature of products, the report does not provide an estimate of estimated volumes.

The USDA also forecast FY19 U.S. dairy imports to remain steady with both the previous year and the November forecast at $3.4 billion, including $1.3 billion in cheese.

Initial analysis of 34 dairy farms participating in the Dairy Farm Business Summary and Analysis Project shows that average total costs to produce milk rose about 10 cents per cwt in 2018, while the gross milk price declined $1.06 per cwt. The preliminary progress report of the project, supported by Cornell University, Cornell Cooperative Extension and Cornell CALS PRO-DAIRY, reviews on-farm changes from 2017 to 2018.

Highlights from the first preliminary report include:

The Minnesota Department of Agriculture (MDA) is awarding up to $50,000 in grants to eligible institutions to increase the use of Minnesota dairy in their nutrition programs. Application deadline is April 4.

The Agricultural Growth, Research and Innovation (AGRI) Milk Cooler Grant Program assists schools and early care and education organizations in purchasing milk coolers and related dairy equipment. Each school or organization may apply for up to $1,500 per milk cooler. A maximum of three proposals will be accepted for each organization or school district. Eligible expenses include the cost of the milk cooler and associated installation expenses.