The last time average replacement cow prices dipped below $1,200 per head was 1998, based on USDA data. 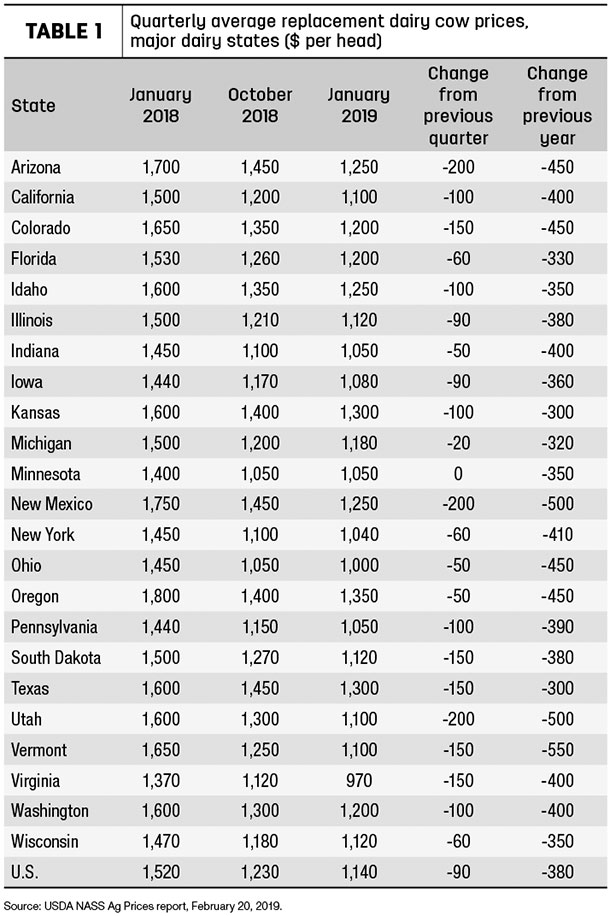 The USDA estimates are based on quarterly surveys (January, April, July and October) of dairy farmers in 23 major dairy states, as well as an annual survey (February) in all states, according to Mike Miller, with USDA’s National Ag Statistics Service. The prices reflect those paid or received for cows that have had at least one calf and are sold for replacement purposes, not as cull cows. The report does not summarize auction market prices.

Average prices could be even lower, if not for a lower-valued portion of liquidated herds being sent directly to slaughter instead of being offered on the dairy replacement market.

“Dairy cattle values are lower due to the prolonged price below cost of production,” said Sam Miller, managing director, group head, agricultural banking with BMO Harris Bank. “Demand for dairy cattle is down as a result of excess replacements from widespread adoption of sexed semen technology and limited expansion given low returns.”

“A number of producers who historically could count on dairy replacement sales for revenue are not bringing in as much on those like they did in the past. I have seen 1,100- to 1,200-dollar springers and 1,400-dollar fresh cows, but these are the exception, not the rule. These same animals were bringing 1,500 to 1,600 dollars and over 2,000 dollars in years past,” Lange said.

Replacement values are so low, he said, in some instances replacements are bringing just $100 to $150 more than culls.

The low prices go beyond less income for those selling cattle.

The flip side, Lange noted, is that it’s a buyer's market and some good deals are to be had. “While buyers are few and far in between, quality cattle will always bring a slight premium to grade cattle in the marketplace,” he said.

Lange’s advice: “The best option is for producers to scrutinize replacements and not raise any more than they need to at this point, and shift focus toward maintaining productive life of cows in the herd.”

That’s happening, as more producers begin to breed portions of their herd to beef sires, hoping to capture some income from crossbred beef animals as both the need and value of dairy replacement heifers decline. The full effect of that on the dairy herd, however, takes time.

“We’re living through the heifer bulge,” said Geoff Vanden Heuvel, director of regulatory and economic affairs with California’s Milk Producers Council. “This will correct, but it takes two or two-and-one-half years from the time a producer makes the decision and implements a change in a breeding program until it affects the number of milking animals in a herd. We’re a year into a two- to three-year correction.”

“Based on recent cattle sales in Michigan, we are seeing cattle prices trending in align with USDA reports, with recent sales reports in the 1,000-dollar range,” said Ben Spitzley, Group Dairy Manager for GreenStone Farm Credit Services. “The compression in cow prices has made it difficult for some and opportunistic for others. Those looking to sell cows are likely unable to recoup the cost they have in them. Those looking to buy cows are lowering their cost of production from prior years.

“At GreenStone, we are cautious with making any valuation adjustments,” he said. “The average value we lend for dairy cattle has been very consistent over the years. We have pricing guidance based on weighted average prices from a four-year ongoing study of auction results and private treaty sales. Our pricing guidance is further differentiated based on energy-corrected milk production. We did not follow the market all the way up over 2,000 dollars like we saw in 2014, and likewise have not followed all the way down to the levels suggested in current sales.”

The U.S. dairy herd is starting to shrink, slowly, but that’s more likely due to higher slaughter numbers. Based on the USDA’s estimates, December 2019 U.S. cow numbers totaled about 9.351 million, down 57,000 head from a peak of 9.408 million to start the year. (It should be noted that USDA dairy cow estimates are based on voluntary surveys and are only as good as the data collected.) Much of the decline has occurred in the latter half of the year. (Read: December milk production growth slows, milk prices lower.)

Prices have rebounded, but looking back, year-end cull cow prices reflected both normal seasonal weakness as well as a lengthy downward trend.