Email Dave Natzke
looks at issues in the news impacting you and your dairy business.

In recognition of your time, we’ll attempt to summarize recent events or actions making dairy headlines and reported in our weekly digital newsletter, Progressive Dairyman Extra. Then, we’ll try to put that news into perspective and briefly describe how it might affect you.

With the government shutdown still ended – at least at Progressive Dairyman’s deadline – the USDA’s Farm Service Agency (FSA) is putting final numbers to the Margin Protection Program for Dairy (MPP-Dairy).

As of mid-December, FSA had processed about $253.8 million in MPP-Dairy indemnity payments for the year. More than 21,400 dairy producers opted for coverage through MPP-Dairy in 2018.

The total payments represent indemnity payments for milk produced in February – August 2018. Producers who chose premium coverage levels of $7.50 or $8 per hundredweight (cwt) received payments every month during that period. There were no MPP-Dairy payments at any level issued for January, September, October or November 2018. December 2018 margins will be released Feb. 20.

Even if MPP-Dairy payments are not triggered for December 2018, there may be more payments issued for 2018 milk production. The 2018 Farm Bill provides retroactive MPP-Dairy payments to producers who may have enrolled in a separate Livestock Gross Margin for Dairy (LGM-Dairy) program prior to MPP-Dairy program changes included in the Bipartisan Budget Act of 2018.

Moving forward, the 2018 Farm Bill replaces MPP-Dairy with the Dairy Margin Coverage program (DMC). The USDA must write rules for the new program and establish a sign-up period. While producers wait for final rules and the sign-up period, what we do know is: The DMC offers much more affordable and higher margin insurance coverage levels.

Based on projections by the Program on Dairy Markets and Policy as of Feb. 5, monthly income over feed cost margins will gradually increase in 2019 but remain under $9.50 per cwt – the top Tier 1 insurable margin under the new DMC program – into October 2019.

Another provision in the 2018 Farm Bill partially refunds MPP-Dairy premiums paid in 2014-2017, either in the form of cash payments or to be applied as DMC premium payments for 2019-2023. American Farm Bureau Federation Chief Economist John Newton estimates the total refunds to be about $60 million. Premiums paid in 2018 are not refundable, and neither are administrative fees paid over the entire life of the program. 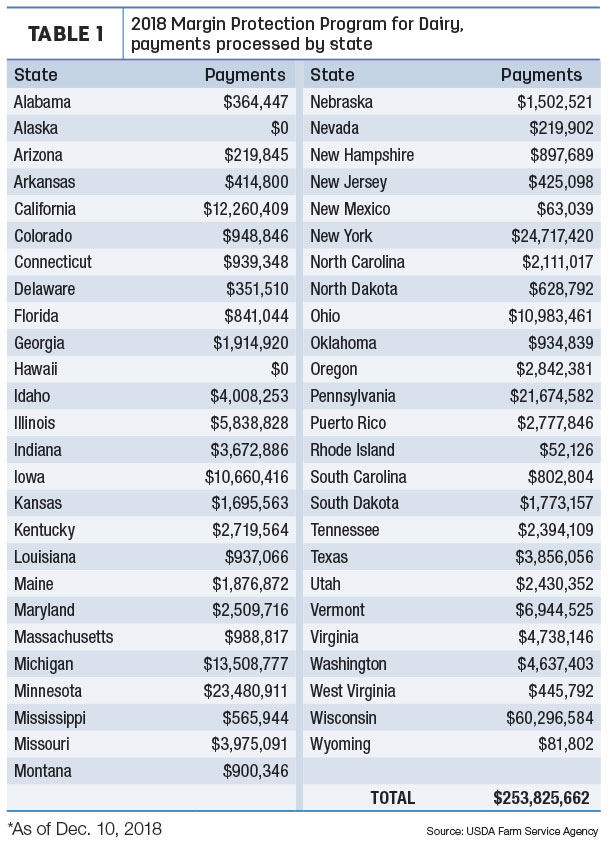 The FDA closed the comment period on issues related to food labels, including the use of “dairy” terms by manufacturers and marketers of plant-based imitators.

Good question. As far as a timetable or rule-making process, it’s not clear (and likely delayed by the partial government shutdown). FDA Commissioner Scott Gottlieb has, on multiple occasions, expressed a desire to address label and marketing claims on non-dairy products that are not nutritionally equivalent to real milk, cheese and yogurt. Dairy organizations such as the National Milk Producers Federation (NMPF) and International Dairy Foods Association are watching the process closely.

Bottom line: In a marketplace increasingly crowded by plant-based imitation dairy products, numerous surveys show consumers are confused about whether those products are indeed dairy foods and whether they carry the same nutritional value.