Matt Lange
Cost of production (COP) is one of the most important metrics to evaluate a dairy operation’s financial status. However, when discussing COP, people typically refer to cash flow and include purchased feed, labor, principal and interest payments, and any cash capital purchases.
Matt Lange

While cash flow is important, it fails to consider value created in forage production or heifer rearing and doesn’t include any unpaid bills on your accounts payables list or depreciation on assets. To get a clearer picture, COP should be viewed from an accrual standpoint.

For illustration purposes (and with 2018 financial reports yet to be finalized later this spring), factors included in calculating COP on a per hundredweight (cwt) of milk shipped basis are described below. Table 1 displays the average costs among all herds analyzed by Compeer Dairy Consulting staff as well as the top 25 percent of Compeer herds (2017 net income basis). 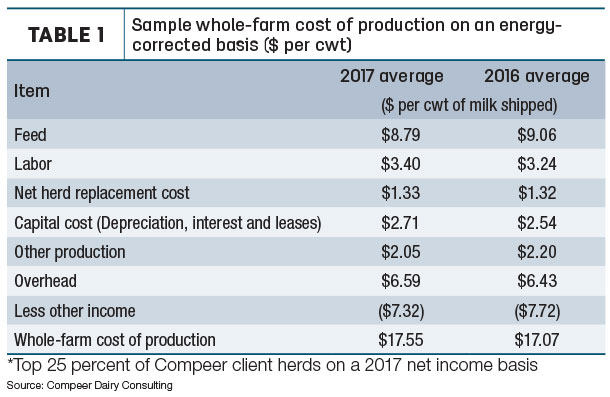 Then, Worksheet 1 provides a more detailed look at COP calculations using the example herd and includes a blank column for you to calculate your COP. 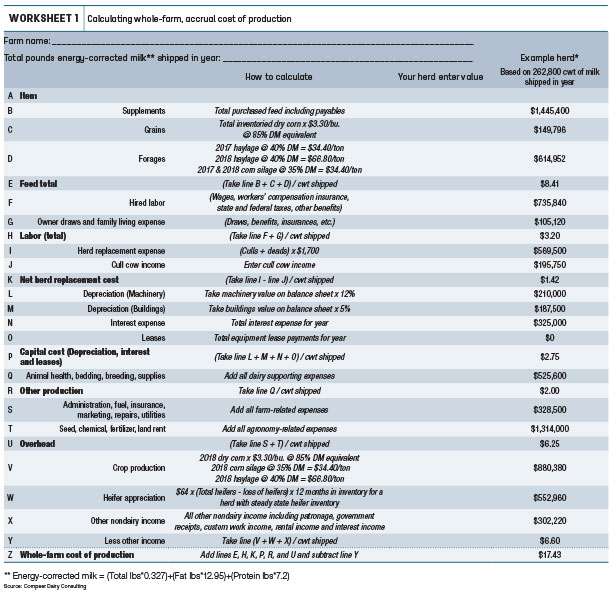 The largest cost for any dairy is feed, including purchased and home-raised feeds. Placing a market value on forages, including haylage, corn silage and grain will help determine total feed cost.

Improve your COP: Harvesting and feeding high-quality forages translates into lower feed costs in two ways: inclusion of a higher percentage of forages in the diet, and lowering purchased feed and commodity costs. Feed costs can also be driven lower by reducing shrink through better storage and feedbunk management.

Labor costs include wages, payroll taxes, workers compensation and benefits paid to employees; and salaries and benefits paid to owners (including wages shown as draws). In the Compeer Dairy Consulting benchmark, 2017 total labor cost averaged about $3.40 per cwt. Some dairy operations in the top 25 percent for net income were below $2.80 per cwt. Labor costs have been fairly consistent over the last several years.

Improve your COP: It can be difficult to lower wages or owner draws. However, maximizing productivity from all personnel while focusing on employee retention yielded the biggest gains in labor performance. A key target for most dairy operations is to keep labor cost at less than 14 percent of total accrual income.

Improve your COP: A mark below $1.50 would be a key target in the current market. Key ways to lower NHRC include culling animals when they are at their prime condition to maximize value, managing heifer inventories to adequately supply replacement needs without artificially inflating the replacement rate and targeting death loss at no more than 5 percent.

From a depreciation standpoint, Compeer Consulting clients’ machinery is depreciated based on use. This is management-based depreciation, not from a tax perspective. For example, say machinery depreciates at an average of 12 percent, and buildings depreciate at 5 percent.

Improve your COP: Keeping capital costs in check is dependent on properly structured debt and leases, reducing cash outflows that will require additional borrowing and maintaining buildings and maximizing the most output from equipment.

While the big three expenses are feed, labor and herd replacement cost, the next five areas to monitor (not counting agronomy expenses) are animal health, bedding, breeding, supplies and repairs.

Improve your COP: Scrutinizing other production and overhead expenses to determine their importance to profitability and the pending consequences if they are removed will allow you to reduce less-than-vital expenses and maximize output of those that remain.

In the final phase of calculating COP, it is important to deduct all other revenue not related to milk and cull cow income. The two major sources of accrual earnings are:

All other revenue is comprised of bull calf revenue, government receipts, patronage, custom work income and miscellaneous income. Generally, this total other income will come to about $6.50 to $7.50 per cwt, which gets subtracted off of the previous COP categories.

There is a lot that goes into accurately calculating your COP and, while operational expenses will vary farm-to-farm, driving down COP is the most long-term, sustainable method to achieve dairy financial success. As you complete your 2018 financials, take time with your lender, a consultant or adviser to help calculate your COP and assess where you stand and, more importantly, where opportunities lie to improve the bottom line.