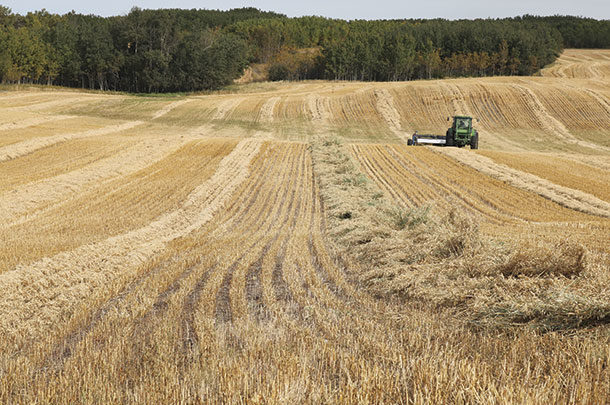 Baling in a challenging high-moisture environment

Baling in a challenging high-moisture environment requires taking a systems approach, he says. “It’s important to evaluate each step in the three main decisions and figure out how to improve each step of the process – whether it’s cutting, speed drying or baling.”

For Sommerfield, his first rule is “have a five-day plan before you cut.” He watches at least two forecasts and incorporates a weather system map into his decision-making. The weather systems map will usually give a five-day outlook.

“I watch the jet stream and look for a high jet stream and high-pressure system to come in for my targeted baling days,” he says. “I look off the coast for large low-pressure moisture areas that may be moving in, that may disrupt a five-day system, and plan around those.”

He bases the five-day haying plan on the fifth day. If the fifth day is not a baling day, then he doesn’t cut or cuts less than a full day. By using a plan, he cuts the risk of getting rain on the hay when it’s in the stage when rain does the most damage to a crop. Two such free weather systems available to show jet streams are The Weather Network and National Oceanic and Atomospheric Administration. Sommerfeld subscribes to AccuWeather Pro, as it has an interactive systems map. “They usually get the systems pretty accurate; it may move or weaken but it will be in the area,” he says.

When Sommerfield can find a five-day window, he plans the cutting. He says, “I use a narrower discbine, with a width of 13-and-a-half feet, downsized from the previous 16-foot haybine we used. This allows me to cut more acres per hour because my speed rose from 3 mph to 6 mph in a 5-bales-per-acre hay crop.” Sommerfield says his speed advantage is 9 to 10 acres per hour, compared to 6 to 7 acres per hour with the 16-foot haybine.

Sommerfield cuts in a circular pattern, rather than back and forth, taking shortcuts across the corners and leaving wedges at least 26 feet wide to clean up when he reaches the center. This pattern, he says, gains around 1 acre per hour to making straight lines.

The second part of the process is figuring out how to dry the hay as fast as possible. While there are many options available for lifting windrows, Sommerfield wanted something that caused less leaf damage but still handled high capacity.

“I would wake up at night with this blurry vision in my head of a machine working,” he says. “I could see the job it was doing but was unclear at first how it worked, and after a few short-sleep nights it became clearer until I believed I had an idea that could actually work.” That was the summer of 2018.

Sommerfield drew up his plans, and then invented his own machine, called the Aerow. He partnered with another local farmer, Ben Voss, to refine and manufacture the new design, which lifts and fluffs the windrow, allowing wind flow to naturally aerate the windrow. The machine has pickup teeth and belting to keep hay from wrapping and plugging, making it amenable to higher capacities. 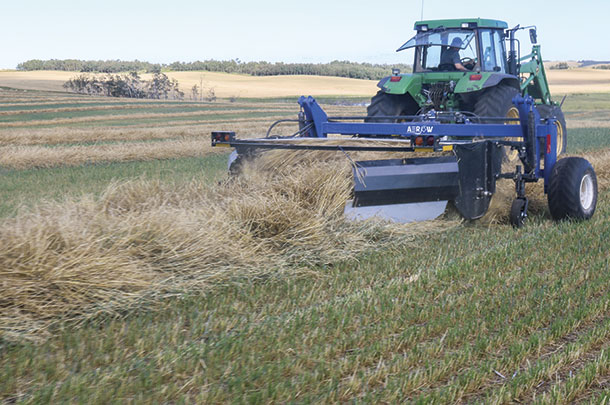 “The idea began when my father and I redesigned a round baler to lift and throw the windrow, lifting and spreading it out and shaking rain water out of it,” he says. “A square baler can also be pulled apart to allow the hay to go over the pickup and straight off the back, leaving the windrow wider and higher.” This method dries hay up to 3% faster than turning it with a V-rake in on-farm tests, Sommerfield says.

This new machine is similar to a hydro-swing haybine. “There’s a pull hitch with a cylinder steering it on a pivot point,” Sommerfield says. “The difference is that a hydro-swing haybine doesn’t have steering wheels.” Sommerfield and Voss came up with steering wheels that give a meaningful benefit in controlling the swath. The system allows the steering tires to change the angle of the rotor relative to the direction of travel of the machine. Steering allows more aggressive or more gentle handling, and angling allows the operator to either spread out the swath or narrow it up.

“The biggest hurdle was finding the courage to build something that no one else had built before and saying I was pretty sure I could make it work in the face of skepticism,” he says. With the machine, Sommerfield now “lifts” the windrows two days after cutting or after any rain event to shorten the drydown time.

A typical silage bale stack for Sommerfield is made with 48-inch bales weighing 1,800 pounds each. He places nine bales wide with eight bales on top, and it is 15 rows long. This leaves 255 bales under a 60-by- 100-foot silage pit cover. He packs a thick layer of black dirt over the edges with his skidsteer tire to seal the stack. “Treat it like a Ziploc bag, pulling out one row or a few days’ feed at a time and resealing as best you can with dirt or snow, and tape up bird peck holes ASAP,” Sommerfeld says.

While hay and forage crops were the inspiration for the Aerow drying system (Aerow), Sommerfield says swathing is making a comeback in small grains as well. “The harvest window is changing, and we’re seeing the impact of cool, wet falls and early snowfall risk,” he says. Another threat to traditional combining in small grains is the ban of glyphosate as a pre-harvest treatment on many crops. “If you have weed growth, or uneven maturity, the only way to get it to dry out is to swath it,” he says. That’s when his new system helps in drying out those windrows.

Another aspect of his systems approach involves baling fully mature oats as part of the winter feed supply plan. Sommerfield bales wheat or white oats as a highly digestible energy source for the cow herd or backgrounding pen and feeds it by rolling bales out to large groups on frozen ground.

Sommerfield says his new fluffer system works well in hay as well as cereal crops. He puts up 1,000 acres of hay and a few hundred acres of greenfeed for his own operation, running 230 head of purebred Gelbvieh females.

PHOTO 1: This 30-foot oat greenfeed crop windrow is being aerated a few hours ahead of the balers.

PHOTO 2: The Aerow machine is aerating a 40-foot swath of hail-damaged wheat before baling. Photos by Ryan Sommerfield.