When phosphorus makes you money

This is especially true for fields that are daily spread or spread without immediate incorporation. The nitrogen (N) fractions volatilize and are lost while the P mostly remains. Thus, more manure is applied to meet the N needs of the corn – and so excess P, above and beyond the maximum needs of the crop, accumulates. The high to very high soil test in P means the odds of getting an economic return on starter P is nearly zero. The farmer concern is that with planting in cold soils in early spring, the plants will not be able to get the available soil P and so will still respond to starter fertilizer P.

Unfortunately, with a new generation on the farm, they have missed some critical work Dr. Ketterings of Cornell conducted 20 years ago to clearly answer this very question. That year, May started warm and dropped as the month progressed. The deluge of cold rain on Mother’s Day started the slide that culminated in 5 to 6 inches of snow at the end of May. Research on cold, wet, low- to medium-P tested soils showed a response. For those fields, you increased yield and made money with P banded.

These fields had the soil tests of high to very high in P. Today’s yields are 50% higher than these, but the soil fertility principles remain the same. The question answered that year is: “Is there still a response to P on the higher-P level soils because of cold, wet conditions?” As can be seen in the table, there was a response to a starter fertilizer containing N.

Despite the cold, wet weather, there was no response to P on these soils testing high in P. This lack of response occurred in both silage and grain. If there are enough available nutrients in the soil to meet the needs of the crop, there is no economic response to adding more of that nutrient. With the price of fertilizer, you can no longer buy from habit, but must buy with purpose of assured economic return. A farmer who followed the above recommendations using just N starter found his field efficiency improved very much, as he was able to plant nearly three times the acreage before having to stop and refill. Despite cold, rainy temperatures and a major snowfall after emergence, his corn grew as well as it ever had. The only loss was the plants he pulled up and took to a neighbor farm that planted the same time and used P fertilizer, so he could compare them. His corn was just as big or bigger but had a much deeper green color from banded N.

Will the lack of phosphorus in the band delay maturity?

First, we must be clear: We are talking about high P levels from soil tests based on Cornell research. The definition of high means there is little to no response in crop improvement or yield to pay for that extra fertilizer. If your soil test is medium or low, there will usually be a yield and maturity response to additional P in the band. Figure 1 shows what occurred at one of multiple sites across the state. 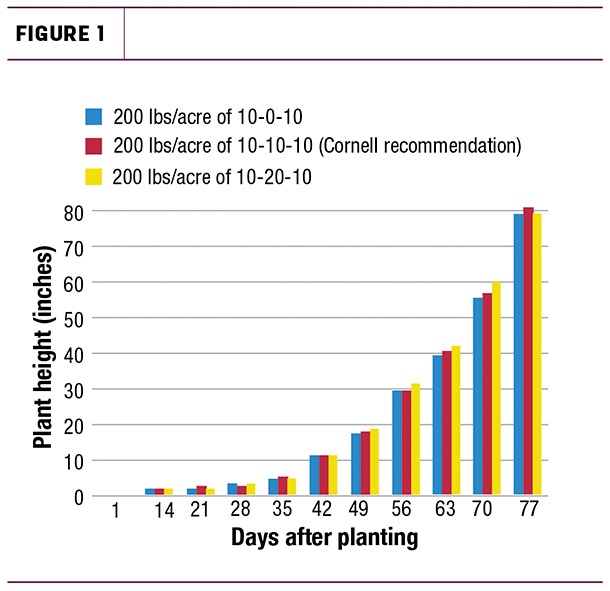 There was no significant delay in plant height, and there was no delay in maturity in the zero P plots compared to those with P in the band. The early season growth was the same for each.

Should I still use starter?

The answer is definitely. We are still suggesting a starter fertilizer of just N. A cold, wet soil has very slow organic matter breakdown, and the crop will respond to N (plus sulfur) in the 2x2 band. Add 30 pounds per acre of N in the band (2 over, 2 down) to carry the plant well into the end of June, when the soils are assured to be warm and the root system big enough to get manure or side-dressed N. For those who inject manure and plant over the injection zone, you already have banded fertilizer, and more is not needed.

Farms rarely have uniform soil tests across all fields. Utilizing an N starter on high-P testing fields and a starter with P on medium/low-test fields may be a bit of a hassle, but it can make a big difference on the cost of the crop you are growing this year. For those with liquid fertilizer systems, having two nurse tanks, one with P and one just N, allows you to make a mix for the field you are planting. It is not exact, but it will get you the majority of the fertilizer savings.