The rising cost of fertilizers: Not a one-year fix

Over the past decades, we have observed an increase in fertilizer prices, and the trend will continue for probably the next few years, with last year (2021) showing the largest increase. According to reports, the price of UAN had almost tripled between April and December of 2021 compared to the past two years. In this article, we break down some of the leading causes for the spike in fertilizer prices and what these prices could mean for the agricultural industry and its consumers.

The production of synthetic fertilizers is an energy-intensive process that relies heavily on natural gas as a raw material. According to Chemical and Engineering News; Market Watch, the cost of natural gas, which constitutes about 74% of the energy used to manufacture fertilizers, has increased tremendously over the last year, especially in continental Europe and the UK. This accounts for about 80% to 90% of the total operating cost of N fertilizers production.

In 2021, several events halted manufacturing in the major fertilizer-producing countries like China and the U.S. For instance, Hurricane Ida shut down several fertilizer production plants in the U.S. in August last year. In addition, major power outages caused problems for fertilizer plants in China, which prompted the country to start discouraging fertilizer exports to protect its own supply until June 2022. China is one of the largest fertilizer producers in the world for fertilizers containing all three major nutrients (N, P and K). The suspension of manufacturing and exporting has had a tremendously negative impact on the entire global fertilizer market. This also prompted the U.S. Department of Commerce to impose tariffs on fertilizer imports from major producers (i.e., Morocco and the Russian Federation), resulting in the monopoly of U.S. fertilizer companies and thus a significant increase in fertilizer cost on the U.S. market.

Higher temperatures and low precipitation have led to drought which, in turn, has resulted in the low levels of reservoirs to generate hydroelectric power for electricity for fertilizer manufacturing.

What does this mean for the agricultural industry? 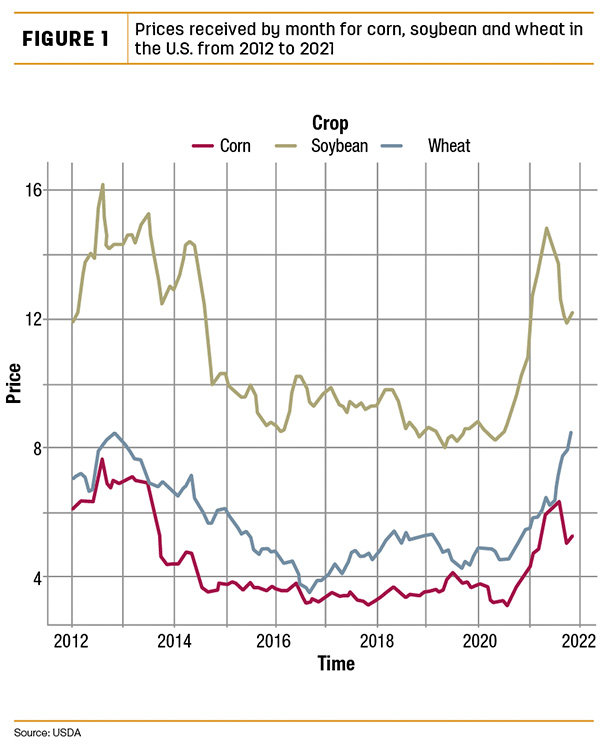 In the anticipation of higher grain prices, the increased production costs are associated with producers expanding the grain acreage, leading to sharp increases in need for seeds, labor, transportation and equipment. Therefore, it is highly probable we will continue to experience increased food inflation and increased food prices in the nearby future.

Exploring other forms of fertilizers, such as the organic forms, have the potential to offset the fertilizer input costs for growers. One of the most widely known types of organic fertilizer products is manure. Manure is a complete fertilizer with several benefits for improved soil health. However, the nutrient composition is not usually balanced in the manures, making soil sampling and manure nutrient testing a requirement. Various types of manure (liquid sludge, solids, etc.) can be utilized, depending on local availability.

Biochar is another useful type of nutrient-rich product often utilized in cropping systems. Research has shown an increase in the productivity of N when applied together with biochar. According to Successful Farming, farmers have benefited from using chicken manure due to having no salts that could negatively impact soil pH and containing additional micronutrients and calcium.

The VRA technologies allow growers to apply the exact amount of fertilizer required by the crop to attain a certain yield. This minimizes nutrient losses due to overapplication. This technology incorporates the use of crop sensors to evaluate the potential profitability of the crop midseason before fertilization occurs. Split application of fertilizers may also be beneficial to ensure a sufficient amount of N for the crop at major developmental stages such as flowering and grain-filling stages.

For long-term benefits, farmers may adopt cropping systems which allow for incorporation of different crops like legumes, which fix free N from the atmosphere into the soil. Rotating crops may not only benefit in terms of fixing N but also help break the disease and weed cycles, saving farmers the cost of pesticides and herbicides.

Adopting tillage practices that minimize interference with the crop residue (no-till and strip tillage) may also benefit farmers in terms of maintaining a microclimate within the plant root zone. In addition, incorporation of crop residues to the soil improves organic matter content, enhancing overall soil fertility.

In conclusion, some have predicted a continued increase in fertilizer costs in the coming decades due to tension in energy markets, increasingly stringent climate policies and the depletion of P reserves. Therefore, as prices continue to rise, farmers are faced with adopting sustainable, long-term strategies to help cope with the rising prices.