Mark Stephenson
It looks like a good year, but let’s be cautiously optimistic about milk prices in 2022. Right now, the futures markets are expecting something like a $4.25-per-hundredweight (cwt) improvement in the average U.S. all-milk price for the year. We even have a futures contract for Class IV milk that is settling over $24 per cwt at the time I write this.
Mark Stephenson

I would urge us to remember that we had similar optimism in the fourth quarter of 2019, and we all remember what 2020 was like. The point is: Consider your risk management options and make sure you secure some of those anticipated profits now.

Of course, life can throw us curveballs – like a pandemic – but that degree of market interruption has a pretty low probability. However, there are other things that can temper our excitement about a really big forecast milk price. One thing is that we may overproduce the market needs trying to capture those big prices. Another is that inflation is chipping away at the margin we would expect. Let’s think a bit about the effect of inflation on the dairy markets.

First, we haven’t seen this level of inflation in four decades. Many producers today will not remember what inflation can do to our businesses because they weren’t making milk production decisions in the 1980s.

Inflation is basically the decline of purchasing power over time. A broad measure of the rate of inflation is the Consumer Price Index (CPI) compared to the same month a year earlier. The Bureau of Labor Statistics collects data on prices of a broad range of goods and services and expresses those values as an index. The CPI inflation rate has been above 5% from June 2021 to the present and was above 7% in December (Figure 1).

The Federal Reserve board, or “the Fed,” has used inflation as its primary optic for their activities for a long time. They don’t want zero inflation because that is an economy without enthusiasm for growth. But they don’t want an inflation rate of 7% either – that’s too much enthusiasm, and it can lead to disruptions in the economy. The Fed has had a target rate of inflation of about 2%, and they have maintained something close to that for many years.

The Fed is always cautious about their activities. For instance, the current spike in inflation was thought to be temporary and would resolve on its own, and there was some reason to believe that may be the case. Look at the graph of personal savings rate (Figure 2). 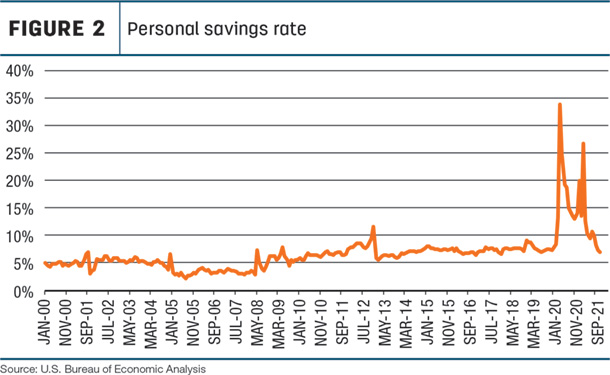 It is typical for U.S. consumers to save about 6% to 8% of income, but there was a huge spike in savings during the early months of the pandemic. When we were “safer at home,” not everyone was out of a job. We pivoted and worked from home and had the savings of not commuting or not eating out and not flying. Not knowing what to do with that money, we saved it.

Living captive in our homes had its own impacts. After we conquered breadmaking and had gained 10 pounds, we decided to purchase things like a treadmill, or maybe a new television or gaming machine. Or the house and backyard seemed too small when we were trying to keep the kids focused on their schoolwork, and we wanted a bigger place to spread out. Our savings gave us means to spend on durable goods and, as we chased them with the badly disrupted supply chains, inflation began to rear its ugly head.

The Fed had good reason to hope the inflation was temporary and only reflected our short-term savings chasing some durable goods. But if inflation moves from being temporary to persistent, then it starts to fuel its own future, and that is where it looks like we are headed now.

We call what the Fed does “monetary policy” because they control the money supply and short-term interest rates. “Fiscal policy” is not what the Fed does; it is what our elected officials direct in the way of revenue collection and governmental expenditures. Expenditures on items like war, pandemic stimulus, infrastructure or climate change abatement can be big enough to be inflationary. When those purchases pump money into the private sector, we consumers have more to spend, and that can cause prices to rise on goods and services.

Another cause of more systemic inflation can come from other sources. Back in the 1960s, oil-producing countries got together to form a cartel to manage production and increase prices. OPEC was very successful, and the price of oil skyrocketed. Since the U.S. is a very large consumer of energy, and energy is fundamental to almost everything we build or do, this caused most of the persistent inflation of the 1980s. The government did many things to combat this. One example was: They mandated that automobiles should become more efficient. We have gone from an average of 8 to 12 miles per gallon (mpg) to cars getting more than 30 mpg today – a big energy savings.

What is the cure for inflation?

While the inflation of the 1960s to 1980s was heavily driven by energy prices, our current situation may find inflation driven by labor costs. Labor costs, like energy, are at the base of all we make and do. Many millennial families have found dual incomes are hard to sustain when we can’t find daycare, trying to be our children’s mentor for schooling at home or preparing more meals in our own kitchens. This calculus has caused many of those families to determine that one of the spouses will stay at home and provide the core help needed there. That has contributed to labor shortage.

Many of our baby boomers have also decided that the craziness of working from our homes just isn’t what they want and have decided to retire earlier than they originally planned. Having both the millennials and baby boomers dropping out of the labor force may have been precipitated by the pandemic, but these were demographics we would have been fighting anyway. Labor shortage is likely to be the systemic cause of inflation going forward.

What is a prescription for agriculture?

So what about inflation for the agricultural sector? Be careful in the years ahead about capital investments. We learned back in the 1980s to count on inflation, i.e., we knew it was going to be there, so machinery and other depreciable items may be worth even more a few years after they were purchased, and that justified many investments … until it didn’t. Much of the agricultural crash of the 1980s was from farms that had overextended themselves based on appreciating asset values rather than a return on the capital investment.

Given that labor is likely to be in persistent shortage, I would focus on labor-saving investments when I have the money to spend. Automated milking is now proven technology but still has deployment opportunities for many farms. Automated feed pushing and delivery systems, manure handling and stall maintenance are also available. John Deere has announced its first fully autonomous tractor to be widely available this year.

Labor saving in agriculture may be among our most sensible investments for the next decade or two.