During the peripartum, dairy cows face an increased demand for nutrients to support the initiating lactation. As this demand is followed by slower increments in dry matter intake (DMI), the levels of energy consumption do not meet the energetic requirements of the starting lactation.

Due to the detrimental impact of pronounced and extended periods of negative energy balance, the evaluation of the energy reserves by body condition scoring (BCS) is a monitoring practice implemented in dairy farms. Body condition scores are considered an indirect measure of the level of subcutaneous fat, assessed on a 1 (severe underconditioning) to 5 (severe overconditioning) point scale with 0.25-point increments.

Remarkably, although the interest in body condition scores is increasing, it is estimated that only one-third of the dairy farms have implemented this scoring into their management practices. Limitations such as subjectivity and significant use of time are proposed as the main reasons for low levels of application at the farms and, as a response, new automated technologies such as the use of 3D have been developed.

The extra challenge of disease

The interrelationship between loss in body condition score and occurrence of disease during the transition period is complex, and establishing precise cause-and-effect associations is challenging. Increased risk of milk fever, ketosis, fatty liver, metritis, digestive disorders and mastitis in cows with greater loss of body condition score after calving has been reported. Conversely, diseases associated with reduced feeding time and decreased DMI would result in increased loss of body reserves and deviation of energy resources for the immune response. 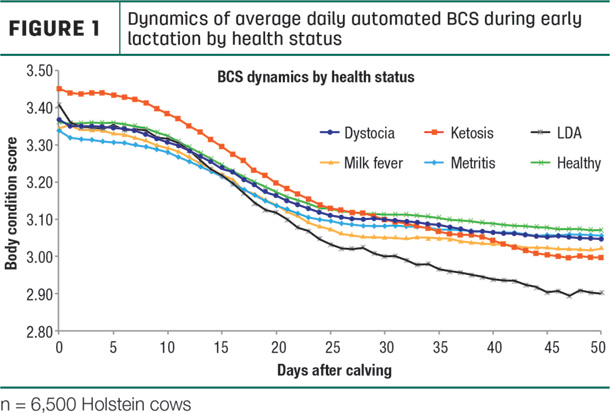 When health status was analyzed, cows with reproductive or non-reproductive disorders had smaller odds of resumption of ovarian cyclicity compared with healthy cows (Or = 0.65 and 0.79, respectively). For pregnancy outcomes, cows with reproductive disease had smaller odds of pregnancy at the first A.I. and at 150 DIM compared with healthy cows (Or = 0.70 and 0.73, respectively). As expected, both loss of body condition score and health status had a significant effect on culling and death.

The use of information on body condition score change and health status, which is accessible in modern dairy farms, could assist in making more informed decisions regarding management or culling during early lactation.