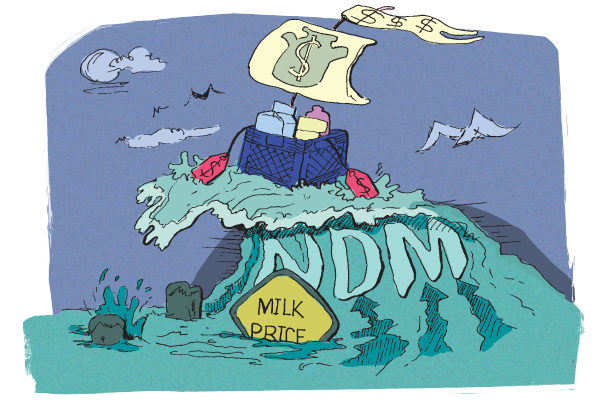 How nonfat dry milk can lift all boats

Milk pricing in the U.S. may seem complex, but there are just four commodities from which all other prices are derived: cheese, dry whey, butter and nonfat dry milk. While these four base commodities form the base of milk pricing, in the simplest sense, cheese and dry whey are the inputs for the Class III price, while butter and nonfat dry milk are the inputs for Class IV. These products hold different levels of importance to dairy producers depending on milk utilization, but there is one product that can drive all values higher; like a rising tide can lift all boats, so can nonfat dry milk (NDM).

The goal of any cooperative or milk handler is to get the best value for the milk picked up from dairies. In an ideal world, people would realize the nutritional benefits of drinking milk, and Class I consumption would be much higher than it is. My wife and I have been spreading that word to the people of Chicago. However, with lower demand for Class I ultimately reducing the impact of fluid milk on the blend price, dairy producers have become increasingly reliant on the value of manufactured products (mainly Class III and Class IV).

Examining Class III and Class IV prices over the past decade, the values typically remain relatively aligned with each other, with Class III usually holding a premium to Class IV. The spread between the two typically remains below $4 per hundredweight (cwt), but a recent exception occurred in 2020 when the USDA’s Farmers to Families Food Box Program exacerbated the Class III and Class IV spread. This led to depooling, massive disparities in mailbox prices and negative producer prices differentials (PPDs) in many Federal Milk Marketing Orders during 2020 and 2021. Without government intervention, we can assume these markets will return to their normal relationship with one another.

Whenever the NDM price increases by 1 cent, that translates to a 9-cent-per-hundredweight increase in the Class IV milk price. The Chicago Mercantile Exchange (CME) “spot” NDM price increased by over 50 cents per pound throughout 2021, adding over $4.50 per cwt to the Class IV value. This movement has begun to shift some of the dynamics of the dairy markets and could have a significant impact on price action throughout 2022.

Many Class IV milk plants east of the Rocky Mountains operate as balancing plants. They only run near capacity during spring flush, when milk production is seasonally at the highest point of the year. Across the Pacific Northwest, West and Southwest, most Class IV plants run at a higher capacity throughout the entire year. This is primarily due to the proximity the plants have to the U.S.-Mexico border and ports along the Pacific Coast.

While Class III prices usually hold a premium to Class IV prices, it is not necessarily unusual to see Class IV outpace the Class III value. When enough of a Class IV premium develops, milkflows shift as processors and cooperatives seek the highest return for milk. The Class IV plants that are typically utilized as balancing plants tend to bring in incremental loads of milk to improve returns to dairy producers, diverting loads of milk from Class III plants to Class IV plants wherever available. Ultimately, this reduces cheese availability and can be a positive driver on the Class III price.

In addition to milk being diverted when the Class IV price rises above the Class III price, the utilization of NDM in the cheese-making process is also influenced as prices fluctuate, with NDM being used to fortify cheese vats. However, when NDM prices move to a price point high enough relative to cheese, this no longer becomes profitable for cheese manufacturers. Since the price direction for the cheese market is based on the CME spot market, the availability of cheddar blocks and barrels that are eligible for sale at the CME (between four and 30 days old) is imperative. If milk is diverted from Class III plants to Class IV plants, and NDM is too expensive relative to the cheese price, we tend to see cheese supplies tighten and prices increase. The dairy markets felt this effect in 2013-14, when Class IV surged to higher levels.

You could make an argument that circumstances are different in 2022. Over the past two years, most investments in milk processing in the U.S. have been focused on Class III. With the recent trend of milk production declining, the new and expanded cheese production lines may continue to process milk that would otherwise be diverted to Class IV plants. For certain regions, this could negate the previously noted price relationships between the products.

However, the overwhelming force of the international dairy markets will likely trump this effect: Global sentiment is bullish, and skim milk powder (the international NDM equivalent) prices on the Global Dairy Trade auction remain supported as New Zealand product is scarce. In the European Union, prices have trended higher due to similar factors, with weaker milk output, limited stocks and strong demand driving the recent rally. With all of these things in mind, HighGround believes Class IV may continue to lead the charge in 2022.

The rising tide in these markets creates opportunities for dairy producers. A decline in prices may not happen today or tomorrow, but this is the time for producers to pay attention and plan for the future, picking price targets and preparing to take advantage of the markets with the risk management tools available to them. Benjamin Franklin said it best: “Failing to plan is planning to fail.”

This article is provided for information purposes only. Readers should consult their own professional advisers for specific advice tailored to their needs. Information contained in this article may be subject to change without notice.