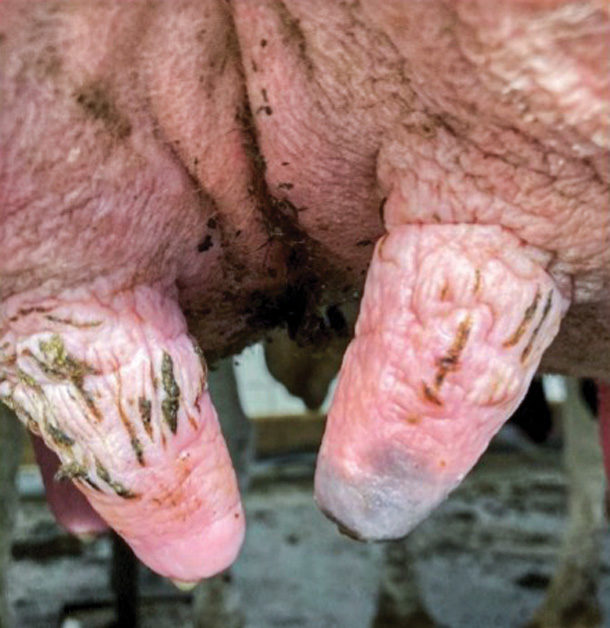 We have traditionally thought of the most common gram-negative organism isolated on dairies as E. coli, but over the last 20 years, that has changed on some farms. While there is always a range on each farm of how the mastitis presents, we hear from farms about two basic clinical presentations with Klebsiella. One is a very severe clinical mastitis with cows becoming systemically ill and with very poor recovery rates. The second is a less severe clinical mastitis but a number of these cows become chronically infected with an elevated somatic cell count (SCC).

While we are not entirely sure of why Klebsiella has become more prevalent in the Northeast, from research done by Marcos Munoz and colleagues in 2006, we know that the primary source, as it concerns to mastitis risk, of Klebsiella on most dairy farms is from cattle feces. Munoz showed that approximately 80 percent of healthy cows shed Klebsiella in their feces over a period of five months of testing. It is still true that green sawdust can be a source of Klebsiella if a farm is using it, but this is not the primary bedding on most farms.

Given that Klebsiella is present in cattle manure, the primary prevention strategy is how to keep manure away from open teat ends. This sounds easy on paper, but in practical applications on real dairy farms, it is an ongoing battle to get it done. Klebsiella falls into the environmental mastitis category, which means that the primary source of the organism is from the environment. The following section outlines risk factors for Klebsiella that we have observed on dairy farms that we work with.

If your farm is using cloth towels, make sure that they are laundered properly and that washing machines do not develop biofilms. We investigated a farm situation in which Klebsiella was isolated from the towels and from swabbing the inside of the washing machine. We recommend that towels are laundered in hot water with detergent and fully dried in a dryer. If drying is not possible or load size is not well controlled, then you may need to consider adding in chlorine in the final rinse cycle of the washing machine.

Teat end cleanliness prior to unit attachment is a critical area to monitor for risk of Klebsiella mastitis. If teats are still dirty when the teat canal is opened to milk, the risk is greater that Klebsiella could make its way inside the udder. In our experience, unless someone on the farm is monitoring this parameter on a regular basis, milkers are unlikely to consistently get teat ends clean. Also milkers need to be trained that wiping the teat ends requires a different hand motion compared to wiping the teat barrels.

For herds that are using some type of mechanical brush to clean teats, we recommend that the disinfectant levels running through the brushes are checked on a very frequent basis to avoid a situation of the brush serving as an instrument to pass organisms cow to cow. We also recommend that these brushes are sprayed out on a regular basis to avoid excessive dirt or manure accumulation in them. Brushes should also be changed on schedule to keep the effectiveness of the cleaning process high.

Pre-dip is an important component of controlling Klebsiella mastitis, as we are relying on this to help disinfect the teat prior to unit attachment. We see a large variation in how well pre-dip is applied on individual cows, which of course plays a role in how effective it is. If there is no dip on the teat end or barrel, then it is unlikely to be effective. Pre-dip should be on the teat for a minimum of 30 seconds before it is removed. Also be aware that if your routine incorporates forestripping immediately after pre-dipping, you may be removing a large amount of the pre-dip. In this case, we would recommend re-dipping.

Post-dip is also a crucial component of Klebsiella mastitis control for a couple of reasons. One is that if teat ends were not cleaned effectively prior to unit attachment, the post-dip can help to disinfect the remaining bacteria on the teat end. Secondly, post-dip can help support good skin condition due to the emollient package that it contains. As outlined below, we do see an association with dry skin and open lesions and Klebsiella incidence.

Preventing short-term changes of the teats during milking is critical as this has been linked to a delayed closure of the teat canal as the cow goes to the stall. Claw vacuum should be set appropriately and all pulsators graphed to ensure they are functioning well. A proper milking routine should be in place to avoid bimodal milk flow or overmilking at the beginning of milking. To avoid overmilking at the end of milking, units should be aligned well, automatic take-offs set appropriately, and the use of manual mode minimized.

We have definitely seen a relationship with Klebsiella outbreaks and herds with dry skin and excessive open lesions. You can think of open lesions as cracks or cuts on the teat that then become infected and do not heal up well. (See Figure 1).

Although the reasons why some herds have a large issue with this are not entirely clear, we have been able to control the open lesions by adjusting the emollient in the post-dip to higher levels. In other situations, better cow positioning and bedding and stall management has helped to keep the stall beds drier, especially in those herds bedding with manure solids, which seems to help skin condition as well.

Another large risk factor that we have seen associated with Klebsiella is spraying deck manure toward cows that have just exited with higher-pressure hoses. This has the potential to aerosolize all the manure pathogens and send them toward the teats and udders of the cows with open teat ends that have just exited. We have seen farms successfully transition to using short-handled squeegees to move manure in the middle of the group and only using the hose between groups when no cows are present.

Keeping units clean is also essential to controlling fecal contamination of milkers' hands as they are attaching units. We recommend that units are sprayed down between every group and then toweled off to prevent excessive water from remaining on the mouthpiece lip.

Controlling the splash of manure onto teats and udders as cows move in the group and to and from the parlor is also critical to controlling Klebsiella. Munoz clearly showed that the dirtier the udders were, the more Klebsiella remained on the teat after prep. Make sure that crossover alleys are not scraped prior to cow movement and that alley scrapers are maintained well so that manure is not left behind next to the stalls or in the middle of the alleys. Establish a consistent pattern among all shifts in the way cows are brought to the parlor. Also holding areas and return lanes may have to be scraped multiple times during milkings if too much manure is accumulating.

Cow positioning in the stalls is key in terms of reducing the fecal load, and therefore Klebsiella, in the back one-third of the stall. If cows are routinely positioned too far forward, then there is most likely manure contamination in the back of the stall. If this is the case on your farm, try to determine if this is a bedding level issue or if there is a need for a low brisket board to properly position cows. Also be aware that if you have narrow alleys and overcrowded pens, there most likely is quite a lot of fecal splash into the stalls that is occurring. If you are manually scraping alleys, monitor the technique to make sure that manure is not inadvertently rolling into the stalls as it is pushed to the end.

Lastly, make sure that you monitor the dry-off procedure. Teats need to be clean and dry prior to injecting antibiotics or internal teat sealants. Teats should be cleaned in the order of far teats first and then near teats. Treatment should be performed first on the near teats and last on the far teats. Make sure that the base of the teat is squeezed off when injecting an internal teat sealant so that it stays in the teat cistern.

As you can see from the risk factors above, getting a handle on this can be a tough job. Many of these areas need ongoing monitoring to prevent procedural drift, which is what makes controlling Klebsiella a challenge on dairies. The good news is that we have seen many dairies be successful in reducing the incidence of this pathogen on their dairy, so it can be done. Good luck; your cows will thank you.

PHOTO: An example of multiple open lesions from a herd with an outbreak of Klebsiella.