The first strategy involved use of microbiological culture to identify and treat any quarter-level infection at dry-off (“culture-guided SDCT”). The second used a computer-automated data-driven algorithm to select and treat only cows that were “high-risk” for infection at or after dry-off (“algorithm-guided SDCT”). Both strategies require necessary tools: an onsite laboratory with an incubator and consumables such as bacterial growth media, gloves, and inoculation swabs for culture-guided SDCT.

Monthly individual-cow somatic cell counts and mastitis event data is necessary for algorithm-guided SDCT. Additionally, both strategies incur labor costs. Both require a small amount of time at dry-off to sort cows into those that will receive antimicrobial therapy and those that will not. Culture-based SDCT requires additional time prior to dry-off to sort cows and retrieve quarter-level milk samples, and to inoculate and read culture plates.

The potential of SDCT to improve antimicrobial stewardship without negative cow or quarter-level impacts are certainly drivers for producers to select either of these strategies. Yet survey data in the U.S. indicates that most producers elect to use BDCT at dry-off. Could the extra labor costs or uncertainty around negative impacts create worry around the economic viability of the practice? Our group aimed to determine the net economic impact of these strategies at the herd level.

A partial budget analysis was used to capture herd-level economic impacts of culture-and algorithm-guided SDCT over the BDCT approach. We performed these calculations using Monte Carlo simulations within the @Risk software program . Many considerations were made for inputs of these models.

First, the findings of our previous study determined that post-fresh udder health was equivalent for the dry cow therapy approaches explored; this was assumed for the first economic models that were investigated. Herd-level components were entered in the model such as costs of medications, labor costs, and cost of the method of SDCT (Figure 1). 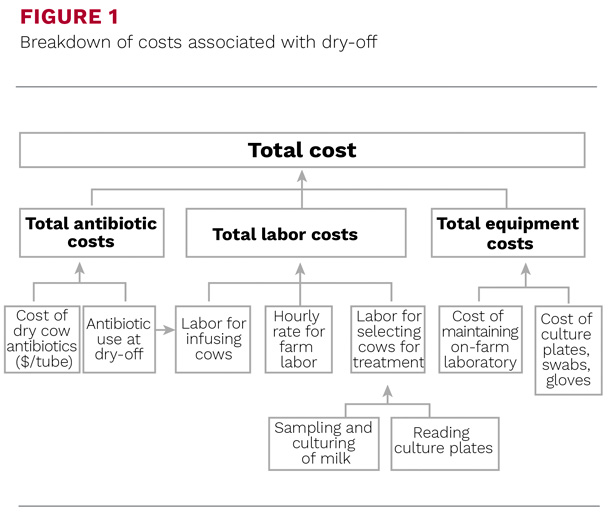 Each of the herd-level components was represented by a range of values sampled from a distribution characteristic of how the data is presented in the field. These distributions were used because costs may vary by farm, such as extra time required for milk sampling or worker wages. Fixed costs were entered for consumables such as culture plates and sample vials. As most farms use regular DHIA milk-recording, this was assumed to be an already-sunk cost for algorithm-guided protocols. Fifty-thousand iterations were run, with each iteration representing one herd under a set of individual economic and health conditions to capture all of the variability that can occur at the farm level. Examples of individual iterations for blanket, culture-guided, and algorithm-guided protocols are shown in Figure 2.

In the situation of BDCT, the largest cost is antibiotics. Although costs decline for medications in the SDCT strategies, farms will experience increases in total labor costs and equipment costs.

The @Risk program generated a net herd impact distribution histogram for the 50,000 iterations associated with culture-guided SDCT (Figure 3), indicating that there is variation in the money saved per cow-dry-off across the herds. 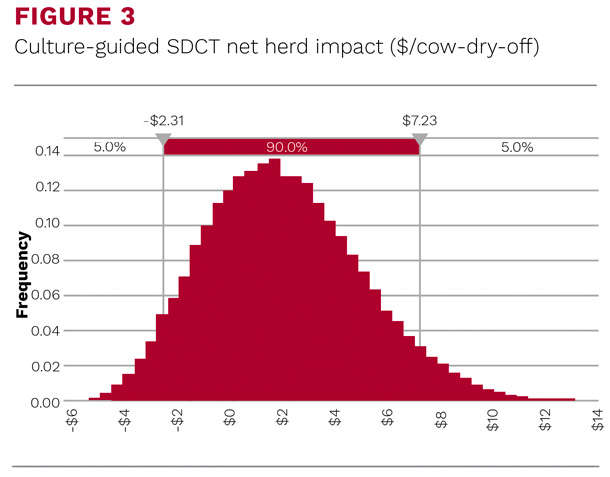 The average economic savings (the peak of the curve) for a herd using culture-guided therapy over BDCT was $2.14 per cow-dry-off. Three-quarters of the herds experienced a positive economic impact (greater than $0) whereas in 25 percent of farms, the strategy was not economical (less than $0). For algorithm-guided SDCT, 100 percent of iterations found that it was a profitable alternative to BDCT with an average net of $7.83 per cow dry-off (Figure 4). 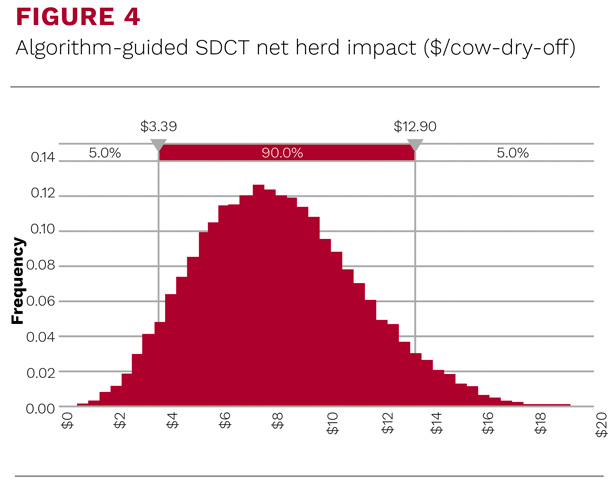 For 1,000 cows dried off per year, this amounts to over $7,500. When we further investigated what inputs were responsible for one farm achieving higher net values than another, we found two major contributors: the cost of the antibiotic tubes and the proportion of quarters treated at dry-off. In the culture-guided program, the latter will be driven by the number of positive cultures whereas in the algorithm-guided program, it will be driven by the number of cows above the thresholds for somatic cell count and mastitis cases.

What if udder health declines?

Though previous research by our group found no impact on udder health consequences when comparing SDCT methods to BDCT, there continues to be the “what if?” question. For instance, earlier SDCT studies did find increases in risk of mastitis and/or worsened milk quality. It should be noted that many of these studies were performed on herds that did not use internal teat sealant or that had a higher incidence of Staph aureus. Regardless, an objective of our group was also to investigate how a decline in udder health after switching to a SDCT strategy would affect the net herd economic impact.

Using the same Monte Carlo simulation models, we were able to include a variable that introduced a cost (based on replacement costs, treatments, milk loss, etc.) for increases in mastitis of one, two or five percent for each herd. The question here was, if mastitis does increase as a result of implementing SDCT, will the farm still experience economic returns? As in the previous situation, antibiotic tubes were the largest contributing expense; perhaps the savings would exceed the costs incurred for mastitis cases.

How can one predict what will happen on an individual farm? We highly encourage discussion with the farm’s veterinarian to determine candidacy for successful implementation, which will include considerations such as dry-off procedures and techniques, current milk quality parameters, presence of contagious pathogens in the herd, and availability/acquisition of necessary tools. To determine what dry cow therapy method might be most cost-effective, our team has developed a tool where producers can enter their treatment and labor costs, current practices, and expected level of treatment to generate values for comparison: Selective Dry Cow Therapy Cost Calculator - Dairy Know. (Figure 5) 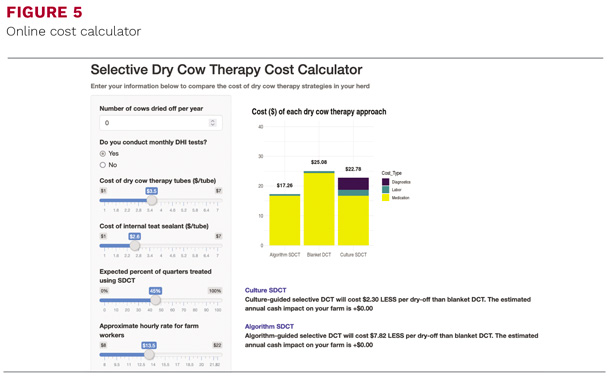 Amy Vasquez is on the Milk Quality and Animal Care team at Danone North America and in previous roles has dedicated much time to extension/research regarding selective treatment protocols. Email Amy Vasquez. Sam Rowe is a senior lecturer in ruminant medicine at The University of Sydney and has conducted research and extension in mastitis management in the United States and Australia. Email Sam Rowe.