It’s becoming a summer of monthly repeats, with drought, financial pressures and availability of inputs and rising interest rates serving as the main themes. Here’s Progressive Forage’s monthly look at market forces during the second week of August 2022.

U.S. Drought Monitor maps indicate moisture conditions worsened over the past month. As of Aug. 2, about 47% of U.S. hay-producing acreage (Figure 1) was considered under drought conditions, up 8% from a month earlier. 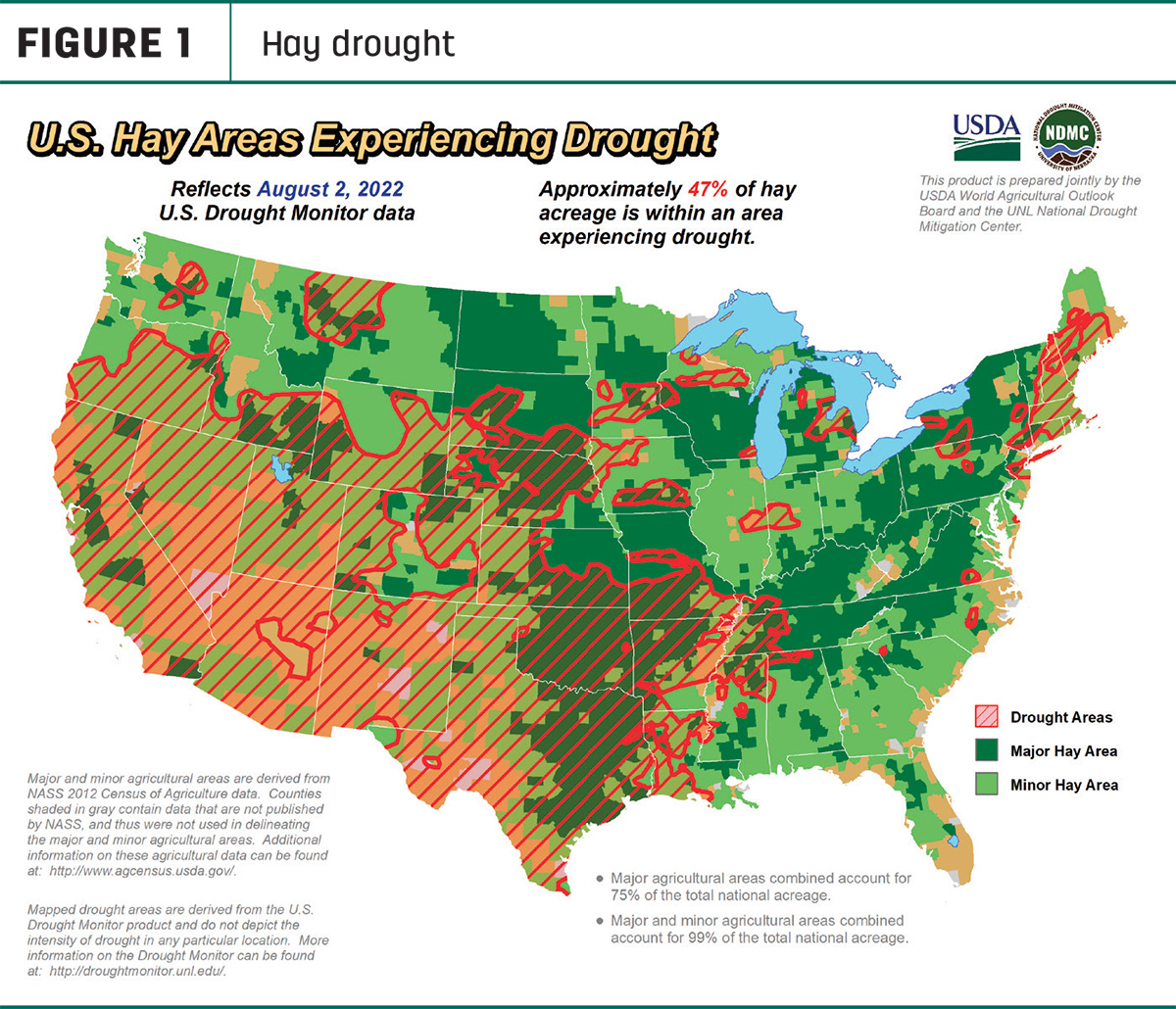 The area of drought-impacted alfalfa acreage (Figure 2) increased 3%, to 45%. 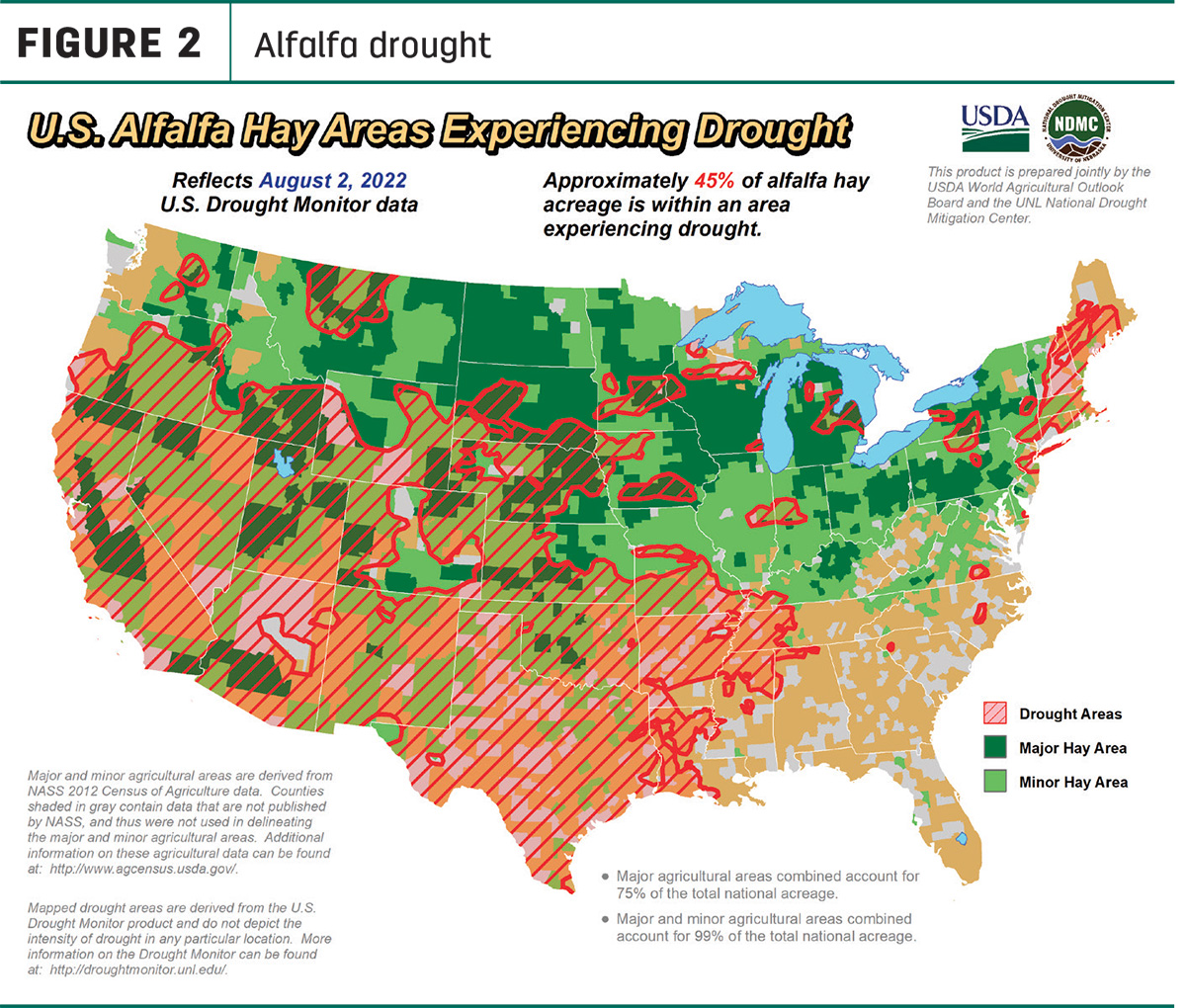 Price data for 27 major hay-producing states is mapped in Figure 3, illustrating the most recent monthly average price and one-month change. 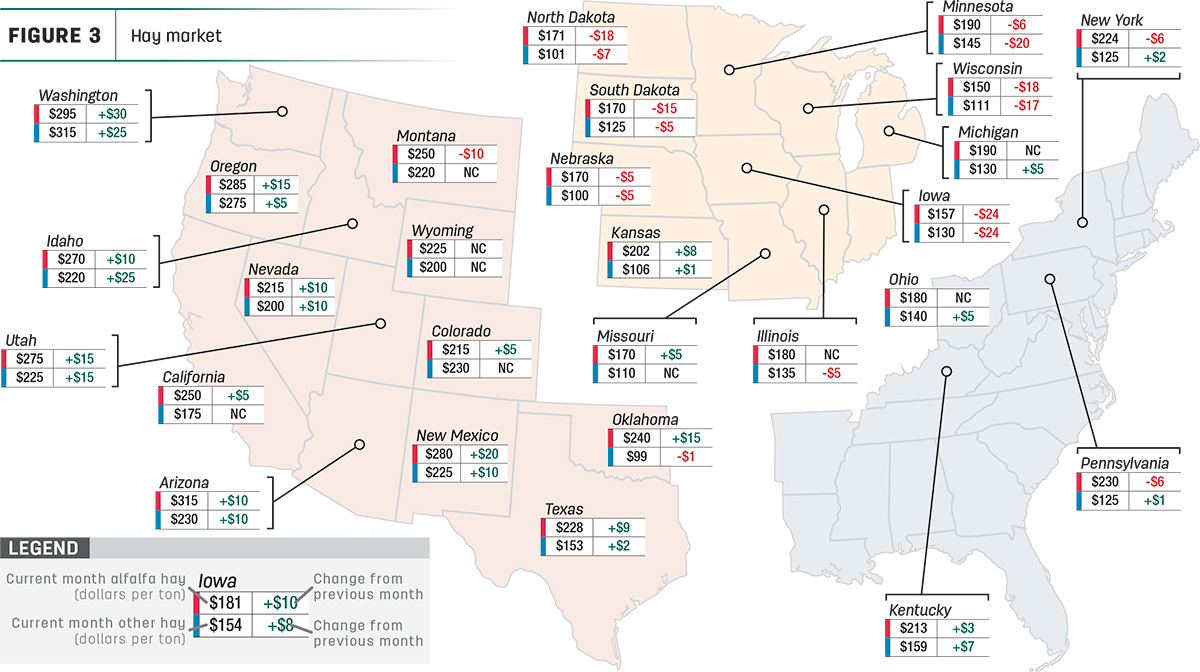 The lag in USDA price reports and price averaging across several quality grades of hay may not always capture current markets, so check individual market reports elsewhere in Progressive Forage.

June average prices for Premium and Supreme alfalfa hay in the top milk-producing states rose another $3 from May to $277 per ton (Table 1) and are up $47 per ton from a year ago. 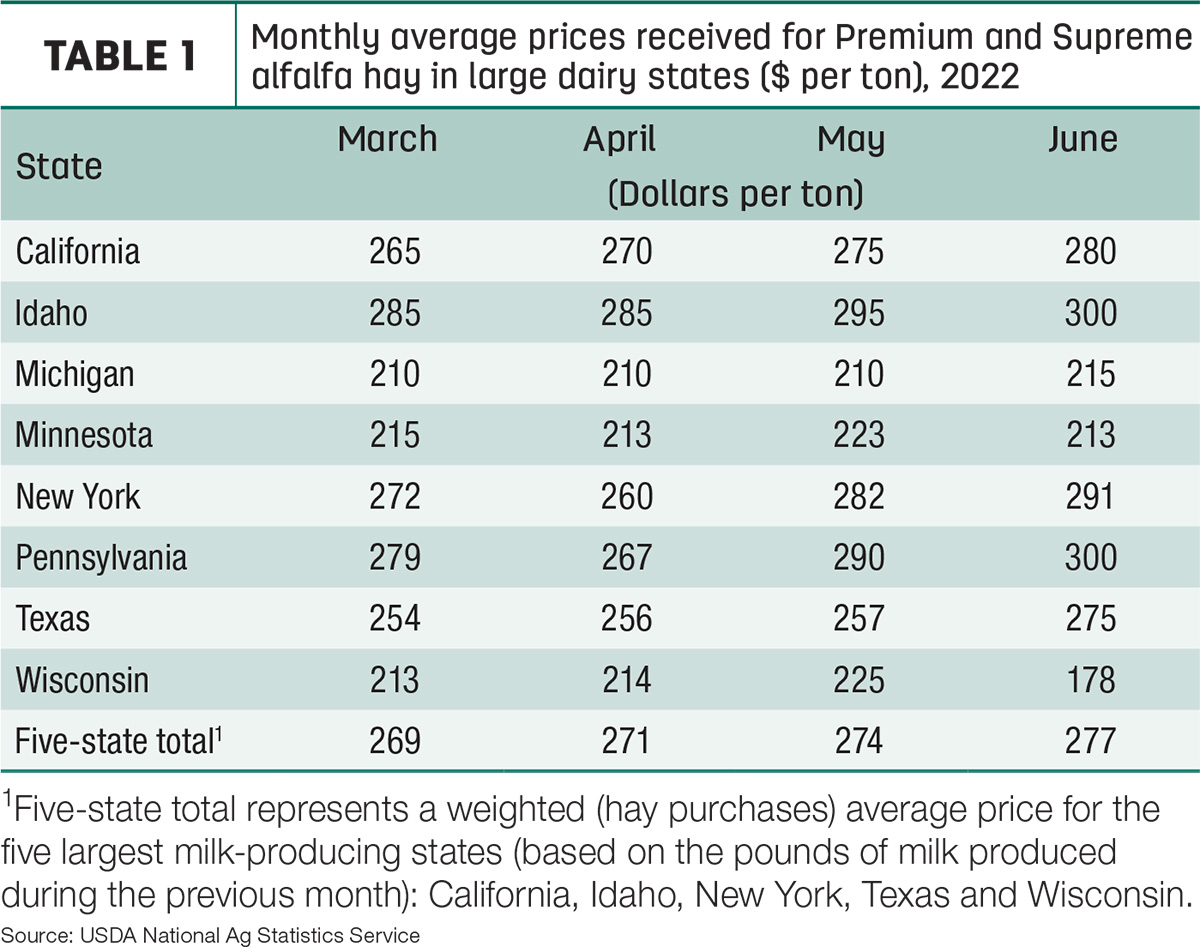 The U.S. average price for all alfalfa hay rose $1 in June to $245 per ton. Prices increased in 14 of 27 major forage states, with double-digit increases in eight Western states. Prices declined in nine states, led by a $24 drop in Iowa. Year-over-year price changes remained large in the West: Arizona, Washington and Idaho alfalfa hay prices were up $90-$115 per ton compared to June 2021.

At $146 per ton, the June 2022 U.S. average price for other hay was up $3 per ton compared to May. Prices increased in 14 of 27 major hay-producing states, with largest month-to-month increases in Idaho and Washington, up $25 per ton. Average prices for other hay remain $65 and $85 per ton higher than a year ago in Idaho, Montana, Utah, Washington and Oregon.

Seasonally low hay inventories – the result of a smaller carryover from last year’s harvest and a slow start to the new-crop haying season – reduced hay supplies available for export, cutting into shipments in June.

Another explanation for the decline in alfalfa hay sales to Japan could be a huge increase in shipments of sun-dried alfalfa meal as a replacement. June sales to Japan were estimated at 9,598 MT. In comparison, monthly exports of sun-dried alfalfa meal averaged just 640 MT during the first five months of the year. Historically, exports of that product totaled 9,110 MT tons in February 2020, but otherwise topped 2,000 MT only nine times in history.

At 95,497 MT, June exports of other hay also fell from May, with sales down to both major markets. Shipments to Japan totaled 57,659 MT, the lowest since August 2021 but still representing about 60% of other hay exports. Sales to South Korea at 23,136 MT were the lowest since January and represented 24% of the month’s total. Other hay exports were valued at about $391 per MT, down about $8 from May.

“Some suppliers have no carryover, and new-crop harvest conditions were terrible,” Mastin said. In the Northwest, many growers were considering only four cuttings of alfalfa this year. Reduced volumes will keep prices high, and combined with unfavorable currency exchange rates, will prevent potential buyers from completing purchases.

Nonetheless, foreign buyers continue to call in search of lower and more stable prices, with hopes currency exchange rates will improve. Some foreign customers have been looking into securing lower grades of hay to match purchase budgets, Mastin said.

Here’s a snapshot of regional markets to start August: