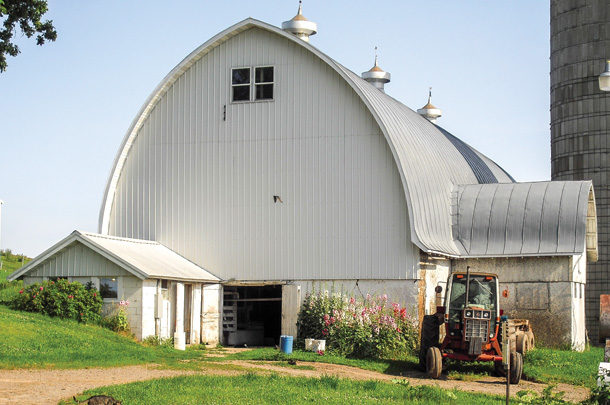 Life on the family farm under an open heaven: Magnificentio

Tom Heck
I have, over the years – as a result of my writing and serving on a board – had the privilege of having many visitors on our farm here. We’ve had them from several different states and several different countries.
Tom Heck
Tom Heck, his wife, Joanne, and their two children own and operate a dairy farm in Wisconsin. Ord...
Email Tom Heck

It’s been a great honor to have them, and I must say we have learned so much from them. A lot of the things we’ve learned are priceless. We’ll remember them for as long as we live.

One particular family who comes to remembrance is Mario, Melody and their four young sons. They stopped here one summer day a number of years ago. This was their first time to be on a dairy farm in the U.S. Melody spoke perfect English, but Mario’s English was very broken and limited.

I started showing him the cattle, equipment and buildings. He had lots and lots of questions to ask concerning it all. It was a great challenge for me to understand his questions in his very broken English, and then I answered them real carefully, trying to make sure he understood what I was saying. It was difficult, but with patience on both of our parts, it went well. I have to give Mario a lot of credit. He could speak broken English; I couldn’t speak Spanish at all. He’s certainly ahead of me when it comes to languages.

One thing I’ll remember forever is when I took Mario into the haymow of our two-story dairy barn that was built in 1934. When he stepped in there and looked up, he exclaimed, “Magnificentio.” I fully understood that.

As we continued to tour the farm, looking at all the cattle and machinery, I started to learn a lot from Mario. Mario was born and raised on a small farm in the mountains south of Mexico City in the state of Puebla. The farms in the mountains of Mexico back then were nothing like the farms we have up here for cattle, machinery, buildings and land. So our farm was really awesome to him, and it made me realize anew how blessed of God we are.

When Mario was in his early teens, tragedy struck his family. A neighboring man wanted to buy his parents’ farm. Mario’s father told him, “No.” So the neighboring man killed him and took the farm. Mario’s mother took the children and fled to the city for their own protection. They were scared that if they stayed in the area, much more evil would befall them.

Several years later, Mario heard an American missionary share the gospel in the city where they were living. He asked the Lord to forgive him of his sins and to come and live in his heart. He also found the grace to forgive the man who had killed his father and stolen their farm. That was the start of a whole new life for Mario. Later on, Mario married the missionary’s daughter.

Needless to say, I learned a lot that day. I so appreciate living in America, a nation so magnificently blessed by God – more, I believe, than any other nation on earth. Sadly, our nation today has lost so many of the godly values that our nation was built upon and that made our nation great. I greatly fear for the future of our nation if it continues to go down the path it is now. God blesses, but He also judges sin and wickedness. We need Him now, more than ever. Let us seek Him with all of our hearts.

PHOTO: Our two-story barn: The lower level houses the cattle and the large upper level is the haymow. Photo provided by Tom Heck.

Tom Heck, his wife, Joanne, and their two children own and operate a 35-cow dairy farm in Wisconsin. Email Tom Heck or order his book at Tom Heck Farm.