So you think you want a grazing dairy?

As soon as he “gets it right,” he’ll let you know – it’s a fine-tuning process that never ends.

Bomgardner started out with specific goals for his dairy:

Goal 1
To be profitable, Bomgardner knew when he returned to the family farm in 2005 that he would have to maximize income over feed costs, maintain high stocking rates and maximize labor efficiency.

His goals became more focused when, in 2009, he and his wife bought the dairy cows and, in 2012, bought the farm. Bomgardner works with his dad, who works on the farm as well.

Goal 2
Maintaining a healthy lifestyle away from the cows was an essential goal for Bomgardner and his family. If he was going to run a grazing dairy, then it was also important he get the milking done in time to allow time for family, hobbies and church functions – a worthy goal which has been a struggle but is slowly getting better.

The Normande breed (which is a current experiment for Bomgardner) is known for strength, so we can select for a wider muzzle and maximize grass intake.”

With 100 milking cows, bi-seasonal calving and a mixed-breed composition, his herd average is 65 pounds milk, 4 percent fat and 3.2 percent protein. Intake during grazing season is 45 percent pasture and 55 percent TMR, which is 18 to 20 pounds grass (dry matter basis, calculated on feed refusals).

He feeds the TMR before milking, so cows come out of the milking parlor ready to eat again as they’re returned to pasture.

Bomgardner’s herd starts grazing perennial grasses at 10 to 12 inches height (not in headed stage), with fresh grass provided every 12 hours. Paddock rotation varies from 10 to 45-plus days depending on grass growth and weather. Post-grazing height is 4 to 6 inches. After October, rotation increases to 60 days. 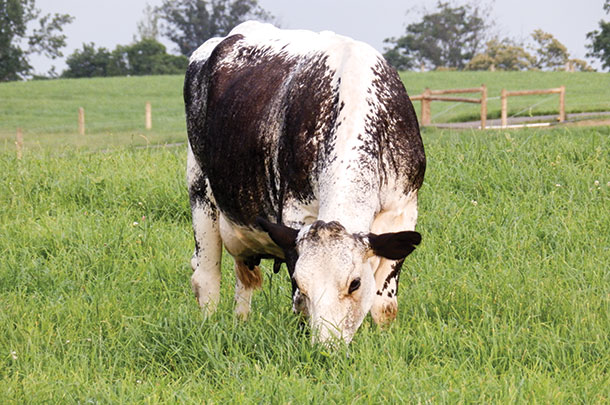 Bomgardner expects to keep cows grazing at least 200 days per year and has gotten greater than 240 days with meaningful grass intake from his 100 acres of pasture.

Bomgardner uses a diverse pasture mix for his grazing dairy, using both perennial and annual pasture. He bases perennial pasture on ryegrass, orchardgrass, festulolium and meadow fescue, with 40 percent of the mix being multiple red and white clovers.

Mixed throughout are forbs: forage chicory (which he adds to the mix), dandelion, etc. His annuals are based on cereal rye for fall and early spring grazing and sorghum/sudangrass for summer grazing.

Bomgardner discusses the pros and cons of managing some of the annuals used in his pastures.

Cons: nitrates, prussic acid (Bomgardner says he hasn’t had any issues with either, although he’s been careful) and high management during planting and grazing

Cons: Seed is usually VNS (variety not stated) and quick to mature

Pros: good selection of varieties, better-quality than rye and good for mixes

Reminder: Italian ryegrass is not a perennial

Cons: most don’t overwinter and can have establishment issues

Pros: diversity, where species benefit from each other and fill in the gaps of each other

Bomgardner suggests a 70 percent perennial and 30 percent annual mix, which seems to be the sweet spot for his operation. However, this year he’s going with 100 percent perennials and is open to finding better ways and methods that will fit his transition to organic.

Bomgardner has found a grazing system that has been successful for him, which includes rotating animals as often as possible, keeping animals from back-grazing (with the use of temporary fences) and managing soil, grass and cows.

Bomgardner has tips for grazing annuals to offer other graziers. His tips include:

Bomgardner says, “There are so many ways to graze. Figure out your system and fine-tune your system.”

Seasonal calving is another facet of the operation considered in a grazing operation. For now, Bomgardner is calving from January to April and August to October – and finds that seasonal calving fits his management style perfectly.

Bomgardner says, “I like mass events that I can focus on followed by a break to take it easy and get my mind off of farming besides milking and basic chores. With my 100 cows, calving year-round meant feeding two to 10 calves every day all year.

However, seasonal calving means feeding 20 to 30 calves at a time for only two to three months a year.” This plays well with both Goal 1, maximizing labor efficiency, and Goal 2, maintaining a healthy lifestyle away from the cows.

Bomgardner does not plan on changing much with his grazing this year, although he’d like to push for 50 percent of the diet from grass while maintaining milk production for hopefully 200-plus days a year. He says, “Crops-wise, I’ll be trying a field of forage sorghum on my droughty soil type and eliminate growing corn for silage.”

Facilities-wise, in October Bomgardner worked on converting a freestall barn to a compost pack. This addresses cow comfort issues and manure storage issues at the same time. While a compost pack allows him to breed much larger cattle, he still wants that smaller animal for grazing, but he should be able to stock more small animals on the pack than larger animals.

So far the project has been a success; however, he is working to learn more about compost packs and how to better manage them.

But again, Bomgardner reminds producers that running a grazing dairy is a fine-tuning process that never ends.  PD

PHOTO 1: These cows are grazing cereal rye in the spring. Blue Mt. View Farm is working on a transition to organic production through their grazing program.

PHOTO 2: The milking herd grazes perennial pasture forages in late June. There are so many ways to graze that adjusting grazing forages is a task that requires refinement every season. Photos by Matt Bomgardner.