How much does the farmer get when a consumer buys milk?

Editor’s note: The following is a follow-up report to an article titled, “What does a gallon of milk cost?” published in 2009. Google made that article popular with consumers on www.progressivedairy.com; it has received more than 10,000 pageviews in the last two years. Click here to read Ben Yale's article from the September 1, 2009, issue of Progressive Dairyman. Following milk from the farm to the truck to the plant through the processing into the bottle onto another truck to the store and into the dairy cooler is easily understood. Following the money back from that cooler to the farm is a different story.

We know that some of it does actually return to the dairy producer, because that is the ultimate source of dairy income. How much of the consumer dollar ends up elsewhere is another question. Answering that question also identifies a traditional belief in dairy marketing that possibly should be reconsidered.

The first conversion is straightforward: Multiply the gallon price times 11.63. This is because a gallon of milk weighs about 8.6 pounds, give or take, based upon whether it is whole milk (heavier) or skim (lighter). But for our purposes, the 8.6 and 11.63 are accurate enough. A $3-dollar gallon of milk is equivalent to $34.92 per hundredweight (cwt) of milk.

Short of access to the confidential business information of stores, distributors, processors and marketers, the exact journey of money from that gallon of milk at the checkout to its ultimate recipients cannot be known. But there are numbers that can tell us what money remains at key points along the path.

The first place to start is determining what milk sells for. The USDA, through its market administrators, surveys milk prices in 30 markets. The survey is done on one day between the first and 10th of each month (excluding Fridays and weekends). The surveys are for prices of milk in each of the largest and second-largest food store chains and the largest convenience store chain in the market.

The reported price is a simple average of these prices. The reports for whole and 2 percent milk, as well as organic retail price surveys since 1996, can be found under the USDA’s dairy reports Marketing Orders Retail Milk Prices ( http://tinyurl.com/3fmpn5z ). This report has several shortcomings.

First, it is a simple average of three pricing points and not weighted for volume. The convenience store price has equal value with the big-box retailer. The other limitation is that there is no Federal Order in California and, as a result, it reports no prices for California.

The California Department of Food and Agriculture (CDFA) dairy website takes care of both of these issues. Using AC Nielsen scanner data, it reports the weighted-average price based upon actual sales for skim, 1 percent, 2 percent and whole milk in 52 markets.

These reports, showing the most recent three months only, are available at CDFA’s Dairy Retail Prices website or http://www.cdfa.ca.gov/dairy/retail_prices_main.html . 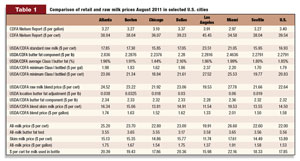 We now have a start. What follows can be approximated for all U.S. cities, but for the Table 1 accompanying this article, I have chosen representative cities and a national average. Click here or on the image at right to view it at full size in a new window.

The cities represent the key population centers of the country – Boston, Atlanta, Miami, Chicago, Dallas, Seattle and Los Angeles and are reports for August 2011.

Now a statistical purist would treat each of the types of milk separately, but the purpose of this article is not to get into the weeds and lose sight of the overall movement of money and to estimate the farmer’s share of the retail dollar.

For that reason, I took a simple average of the retail prices for all reported gallons of milk, regardless of milk fat content, for each of the selected cities.

Multiplying each of these gallon prices by 11.63 approximates the per-cwt value of the milk. The national average for August was $3.40 or $39.54 per hundredweight.

Along the journey of money back to the farm, a lot happens between knowing what milk sells for and the next numbers publicly available – what plants pay for milk. That leaves a big gap from the raw milk silo to the grocery cooler. Part of this gap comes from the complexity of wholesale milk pricing.

Seldom is milk sold simply at a price per gallon. Rebates, advertising credits, shelving fees, volume discounts, pricing for other products and a whole host of other credits and debits enter into the price.

Between the silo and the cooler, milk is pasteurized, standardized, homogenized, packaged, trucked, priced and shelved. Some of the dollars spent for that gallon of milk cover the commodity’s allocated share of the cost of the store, including facilities, utilities, advertising, labor and many other costs. We know that is the case; we just do not know how much.

We can estimate the price plants pay for milk because plants must pay minimum prices for milk used for beverage, or Class I, usage. For most of the markets in the 52-city Nielsen report, these are minimum prices set by the Federal Milk Marketing Order (FMMO) or by the CDFA in California.

However, government prices are reported at 3.5 percent butterfat to reflect the standard for raw milk butterfat at the farm, not what is sold in the store. Fluid milk is sold at lower levels of butterfat than what comes from the bulk tank on farm. Thus, retail-priced milk needs adjusted to reflect its lower butterfat content.

The percent of butterfat in Class I averages 1.85 percent. To adjust this statistical price to what plants actually pay requires knowing the butterfat price for milk.

If the butterfat test percentage was 1.981, for example, then the factor is 0.981. When using other butterfat percentages, that factor would change accordingly. In Table 1, I made those adjustments for the different regions.

This conversion to pre-retail milk cost, or butterfat adjusted raw milk price, when subtracted from the average retail-gallon price of $3.40 shows that $1.60 of the difference disappears between the stores and plants before it is used by plants to pay producers for raw milk. Some of where that difference goes is known.

Plants pay 20 cents per cwt for Milk PEP, a processor-funded, USDA-operated marketing and promotion board most notable for Milk Mustache ads. In most markets, plants pay above the minimum FMMO prices for raw milk. Each month the USDA reports announced competitive prices for the orders.

For some it actually reports the average amount paid by plants in excess of the minimum prices. The difference between the announced and actual payments shows that some plants actually pay less than the announced.

Without a data source showing for all plants, we cannot fully explore how much of the announced price is paid for each of the cities. Depending on the market, it could account for as much as 20 cents a gallon.

At the plant level, the costs to process the bulk raw milk into bottled consumer packages must be paid. As a rule of thumb (which means it is crude and limited), a gallon costs a plant 40 cents for processing, bottling, bottles, caps, labels and return on investment.

Thus, we can estimate that of the $1.60 difference between the retail price and minimum order raw milk prices, 60 to 80 cents can be attributed to bottlers as mandated marketing assessments, over-order charges, and the costs of processing and bottling. The remaining 80-cent to $1 difference in what the plant pays for raw milk and what a consumer pays for processed milk remains a mystery.

What do producers receive in payment for fluid raw milk to be processed? There are three producer price series that are reported. Each has their own use, even though they track fairly closely. The first is the statistical blend price producers receive from the pool in the FMMOs and the overbase price in California.

While this is intended for producers, it does not mean that producers receive this amount. Depending on milk marketing by their cooperative, premiums, costs of marketing and other pluses and minuses, actual payments to producers differ from these blended prices.

The second series is the mailbox price reported by the USDA and the CDFA. The mailbox price is intended to identify the amount of money that actually shows up in the producer’s check after deductions for milk promotion, service fees, dues, capital retains, etc. Essentially it is the money producers can actually spend. It runs several months behind in reporting.

The final series is the NASS all-milk price. This price reported for each state is the average price paid producers less hauling and promotion. The series is reported as an estimate for the month and a preliminary number for the previous month on the last day of the month at http://usda.mannlib.cornell.edu/MannUsda/viewDocumentInfo.do?documentID=1002

Regardless of the series chosen, the value needs to be adjusted to reflect butterfat value so that it is the same as that used in doing the retail milk price comparison using Nielsen reports.

Again, as before, the factors of 1.85 vary depending on average Class I butterfat.

Some would argue that all of the $3.40 belongs to producers. It does not. That extra cost is necessary to put the milk in a form and in a place where consumers will pay for it. What this rough analysis shows is that more than half of the dollars a consumer pays goes to the farmer.

Although there were some tricky math issues concerning butterfat conversion, overall, the physical aspects of milk change little from farm to the store, unlike cheese, yogurts and other dairy products.

What this relatively simple exercise tells us is this: In a competitive market where there is no differentiation between finished product, the demand to cut costs at every level from the store to the farm is intense. There is no way to obtain any added value.

The extra value attributable to Class I milk is derived from its Grade A status. But since all milk today, regardless of its use, is Grade A, that status alone no longer justifies a higher value than milk used for other purposes.

The traditional treatment of fluid milk as the highest and best use is now questionable. Other products, more highly processed and refined with true added value, such as cheeses, yogurts, creams and even more differentiated products, represent where milk really obtains value. PD