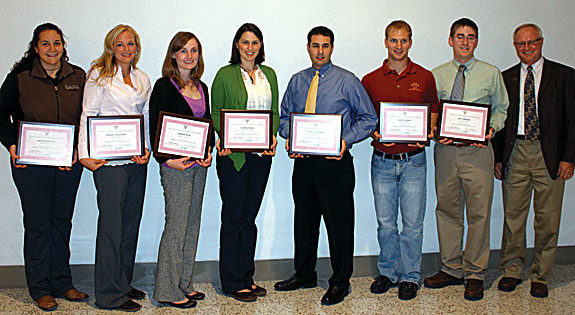 Eight bovine veterinary students from across the U.S. each received $1,500 and an all-expenses-paid trip to the American Association of Bovine Practitioners (AABP) annual conference in St. Louis Sept. 21-24. The students were recognized at the AABP Conference by AABP and award sponsor Merck Animal Health. Since 2004, Merck Animal Health has awarded more than $120,000 in scholarships and travel expenses to 49 students through the AABP Bovine Veterinary Student Recognition Awards.

Third- and fourth-year veterinary students are eligible to receive the award. Students are selected based on work experience, academic achievements, career goals and their primary interests in veterinary medicine.

The following students are the recipients of the 2011 AABP Bovine Veterinary Student Recognition Awards:

Matt Brewer attends Iowa State University College of Veterinary Medicine in Ames, Iowa. He earned a bachelor’s degree in biology from the University of Wisconsin – Eau Claire. Brewer’s interest in science and dairy medicine developed during high school as he spent time with the local veterinarian in Clintonville, Wisconsin. While in college, Brewer gained experience at an American Animal Hospital Association clinic, where he worked with clients, observed business practices and gained technical skills. He has had internships and job-shadow experiences with six dairy practices in northern Wisconsin, gaining more than 400 hours of experience in medicine, surgery, ultrasound, client relations and records analysis. Brewer hopes to work in a clinical practice and conduct research. He plans to complete a doctorate degree and own a rural bovine practice in the Midwest.

Amber Hazel attends the College of Veterinary Medicine at the University of Minnesota in Minneapolis, where she completed her bachelor’s degree in animal science. Hazel began working with dairy cattle at a young age on her family’s dairy farm in Lanesboro, Minnesota. She was active in 4-H and FFA and developed an interest in monitoring production and health parameters. Hazel was a veterinary intern with the Pipestone Veterinary Clinic in Pipestone, Minnesota, where she focused on large-animal medicine, shadowing veterinarians and conducting on-farm research. Hazel is interested in protocol compliance, personnel management, dairy welfare advocacy and auditing. She hopes to practice dairy medicine with a focus in preventative herd health.

Amanda Kilby attends the School of Veterinary Medicine at the University of Pennsylvania in Philadelphia. She earned a bachelor’s degree and a master’s degree in agricultural education from the University of Delaware. Kilby grew up in Colora, Maryland, where she helped on the family dairy farm and watched her mother practice veterinary medicine. Kilby was an active 4-H member and showed dairy cattle at the fair. She worked for local dairies in exchange for permission to show their registered dairy heifers and later got involved with their herd-health programs. Kilby also had the opportunity to practice veterinary skills in Costa Rica, Nicaragua and Liberia. She hopes to work for an ambulatory dairy practice or a large dairy. She would like to own or become a partner in a diversified dairy practice.

Brett Kroeze attends Iowa State University College of Veterinary Medicine. He earned a bachelor’s degree in agricultural business from Dordt College in Sioux Center, Iowa. Kroeze grew up in Hull, Iowa, spending summers working on his grandfather’s dairy farm. He decided to become a veterinarian after a shadowing experience for one of his college classes. He also spent a summer as a veterinary assistant at Valley Veterinary Clinic in Rock Valley, Iowa, where he assisted with farm calls, surgeries and treatments. Kroeze works at the Iowa State University Veterinary Diagnostic Laboratory, and plans to be a dairy practitioner, with the goal of becoming a partner in a veterinary practice. He hopes to inspire others to become veterinarians by offering them exposure to bovine medicine through his practice.

Brandy Lengacher attends the College of Veterinary Medicine at The Ohio State University in Columbus, Ohio, where she also earned a bachelor’s degree in agriculture and a master’s degree in public health. Lengacher continues to be involved in her family’s 360-acre, 70-head, cow-calf, feedlot and cropping operation in Medina, Ohio where she learned skills ranging from crop management and harvesting to animal care and husbandry. Showing beef cattle through 4-H sparked her interest in bovine medicine. Lengacher hopes to find a career that combines her interests in public health and food-animal medicine while assisting her fiancé on his dairy farm.

Melissa Masters attends the College of Veterinary Medicine at Mississippi State University in Starkville, Mississippi, where she completed her bachelor’s degree in animal and dairy science. Masters is pursuing a dual degree, with a master’s degree in production medicine focused on beef cattle, in addition to studying veterinary medicine. Masters has worked hard to learn about the many facets of agriculture that she was not exposed to while growing up in Winchester, Virginia. Her experience includes research and work in a variety of environments including small-animal clinics in metropolitan areas, feedlot consultant practices, ranches and feedlots. She would like to be a consultant and conduct applied research at a large feedyard, later returning to an academic institution to teach and continue research.

Claire McPhee attends North Carolina State University College of Veterinary Medicine in Raleigh, North Carolina. She grew up in Iowa City, Iowa, surrounded by agriculture. She worked as a research assistant in the Occupational and Environmental Medicine Program at Yale University after obtaining a bachelor’s degree from Wesleyan University in Middletown, Connecticut. After two years of work, she began her master’s degree in epidemiology at the University of North Carolina at Chapel Hill, where she studied disease trends among populations of workers and the analytical tools of population medicine. After volunteering at a free health clinic in rural India, McPhee realized that veterinary medicine combined her love for animals with her love of science and medicine. She would like to gain clinical experience in a private practice or pursue further training after graduation.

Judd Sims attends the University of Florida College of Veterinary Medicine in Gainesville, Florida., where he completed his bachelor’s degree in animal science. Sims grew up in Simsville, Florida, a small farming community established by his great, great grandfather. Sims was active in 4-H and FFA and enjoyed showing and judging livestock. He worked as a technician in two small-animal practices, assisted with large-animal research and interned at AgReserves Inc., a corporation that operates farms and ranches in North and South America, Europe and Australia. After graduation, Sims hopes to be a professor of food-animal medicine and surgery at a college of veterinary medicine, where he will conduct research, lecture and teach clinical skills. PD