A financial study analyzed 2103 data from five millionaire model dairy farms (MMDF) and 10 organic dairy farms (ODF). These farms are located in northeast Iowa, southwest Wisconsin or northwest Illinois. The farms may or may not be representative of the industry because in both groups the farms were selected based on their willingness to supply data or familiarity by extension personnel.

MMDF is an Iowa State University Extension project designed to instill inspiration into beginning and transitioning dairy farmers to utilize labor, assets and management skills to become millionaires over a 25-year period.

Note that this study was done without inquiring of the debt structure for the farms. Thus, the interest expense does not show up as a cash expense, so total cash expenses are before interest.

So which system is more profitable?

To answer that question, first realize that both of the datasets are very small to make a definitive statement. Second, there are some farms in each dataset that are higher in profitability than the other dataset, and some that are lower in profitability. And third, realize this was data from only one year, and the conventional milk price can swing significantly from year to year.

The average ODF had 43 cows per full-time equivalent (FTE), while the average MMDF had 69 cows per FTE. Other data, such as efficiencies per cow, can be found in Table 1 along with some financial ratios.

The profitability of the “average” group varied greatly. So, Section 3 of Table 1 includes the top three high-profit ODF. Note that this data beats the MMDF data in most respects in profitability. Also note, this is only one year of data, and the conventional milk price has large price swings. 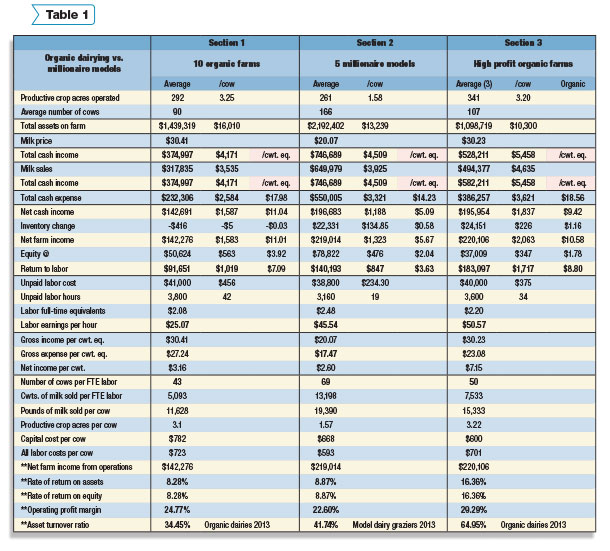 For more information on this study, visit the Iowa State University website.