This year, the International Agri-Center’s (IAC) World Ag Expo embarked on a new adventure by hosting guided school tours on Thursday, Feb. 12. The tours were about two hours long and lasted from 9 a.m. to noon; after which, attendees were free to tour the grounds on their own.

Although originally directed towards high school students, the final count showed that more than 1,800 students, ranging from junior high to freshman year of college, attended the event. The students came from 50 different schools, not all of them local. While most were from California, some came from as far away as Utah and Nevada.

A total of 57 exhibitors participated in the event. Each tour stopped at six exhibitor booths where company representatives shared a bit about their company and the industry. According to Select Sire’s representative, Greg Collins, it was good to have the chance to be a voice for agriculture. Although they may not have reached all of the students, the opportunity was still worth it because it enabled them to encourage some of the kids who enjoy animals and agriculture to consider a career in it.

While many of the students were part of the FFA, not all of them were. Whether the students were familiar with agriculture or not, the teachers hoped this would be an educational trip for them, both to give them insight into future career options and a glimpse into how their food is produced.

“I wanted them to see the various opportunities through agriculture,”Ariana Halum, a high school teacher from Corcoran, California, says. “We’re from a rural town. A lot of them know the crop aspect and cotton because that’s mainly what our town consists of, but they don’t necessarily know about the dairy industry or the harvesting or some of the other stuff. This is an opportunity for them to see what’s available to them in a lot of different areas.” 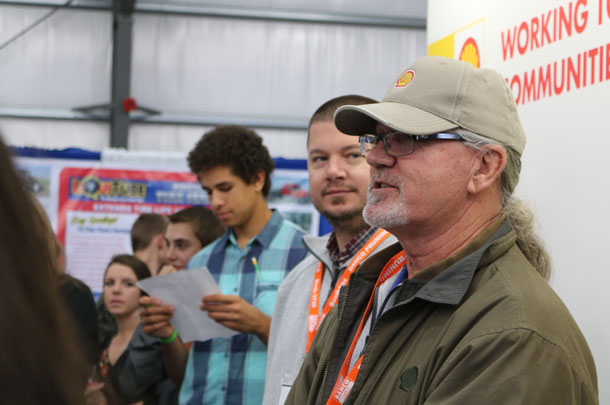 Michal Evan Phillips, an English teacher at Reedley Middle College High School in Reedley, California, says the goal of the trip was for the students to walk away from the experience with a better understanding of agriculture and what goes into food production. Many of them have never seen this type of machinery before.

“Those kinds of things are really impactful for them because they just think that meat comes in a package that’s bought in a store,” Phillips says. “They don’t see that it’s actually done otherwise. They’re learning that now, but now, here they’re seeing the machinery that goes along with that and the men and women who do it.”

For tour guide and Tulare County Farm Bureau representative, Carrie Crane, the goal of the day was ag education. Having grown up on a dairy, she was thrilled to be an advocate for agriculture to the 75 students she showed around the event. In her line of work, she often meets people who think milk comes from a grocery store, not from a farm. Events like this help to not only take it a step further and say milk comes from a dairy farm, but to also show the other sides of the agriculture industry.

“There’s more to agriculture than our farmers, producers, dairymen and growers,” Crane says. “It’s the allied industries that make the industry happen, that support the dairy industry and farmers. That is what I believe the World Ag Expo encompasses. You look across these grounds, which encompasses 80 acres of machinery and equipment, which is also in agriculture. That’s what I hope to get across. You think of agriculture, you think of farming, but its so much more than that. What happens to that milk after it leaves the cow to get on the truck and then all of the inputs and equipment that goes into producing that milk is what you can see at the World Ag Expo.

“This is a new aspect, which I think is a very important aspect to the show. We have a lot of students that come and walk around and enjoy the ride and drives and get the goodies, but this is a good addition to drive home the education and maybe perk the interest of some students who may not think that they could be involved in the agriculture industry, and they see something out here that says, ‘Oh, wait; I can.’” Kerissa Chapman, ICA’s AgVentures! and Ag Education Coordinator, was quite pleased with the event. Having expected only 300 to 400 students, most of whom would be FFA, she was surprised not only by the number of students, but also by the diversity.

“I thought we were going to get a lot of FFA chapters, and I started getting these teachers that were in high school, but they taught different subjects,” Chapman says. “They said, ‘We just want to expose our kids to different things about agriculture.’ I also got a lot of junior high. I wasn’t expecting that either because I thought, ‘Oh, we’re going to focus on high school,’ and that was originally what we had discussed on our guided school tours. When I started getting these other teachers, I couldn’t turn them down because I’m just not like that. I’m like, ‘OK, we’re going to expose everybody to agriculture; that’s what we do here.’”

Given the large amount of support they received from the exhibitors and other ag organizations, as well as the turnout from schools, Chapman says she plans to not only host the tours next year, but may extend it to two days. PD

PHOTOS
Exhibitors at the World Ag Expo share facts about their company and the agriculture industry with students. Photos by Jenna Hurty.