How to project your dairy’s true production, break-even cost

Dairy producers are reminded by lenders, consultants and possibly even themselves that it is important to know their cost of production (COP) and what their break-even (BE) is. Those reminders create a link between the operational and financial management of their operation. This can help them understand where the dairy has been, but more importantly, plan for the overall success of the future of the operation.

While cost of production (COP) and break-even (BE) may seem like simple, straightforward terms, there are several items that need to be considered. First of all, a dairy producer should be most concerned about what their own COP and BE is, and how it applies to their own situation.

In addition, COP and BE can be expressed in either absolute dollars or on a per-hundredweight (cwt) basis. Many dairy producers are beginning to realize the benefit of expressing COP and BE in terms of per-cwt as that is the measuring stick for comparing to milk revenue.

Understanding COP and BE will be especially important when considering how, or whether, to participate in risk management strategies or government protection programs.

So what really is the “true cost of production” for a dairy operation? Like many other terms used in the dairy industry, that definition may vary from producer to producer or even among industry professionals. In addition, COP and BE should be calculated on an accrual basis.

The accrual basis matches and aligns your costs in direct proportion to the milk revenue produced, regardless of when you pay for the feed or operating expenses. You may pay for all your purchased forages at harvest time and prepay certain other expenses in December to reduce the income tax impact on your operation.

Under the accrual basis of accounting, those items are ignored and your feed costs are determined based on the amount of feed you actually fed during the measurement period.

The advantage of the accrual basis includes having very accurate COP and BE numbers to compare your milk revenue to so that you can make informed decisions on your dairy. The biggest negative to the accrual basis is that it does require you to determine feed inventory levels at the beginning and the end of the period for which you are calculating the COP or BE. 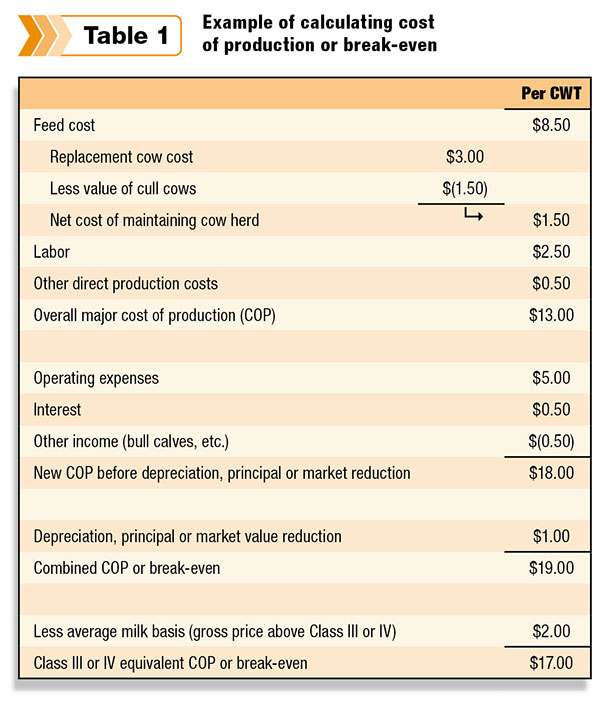 This can, however, be done via reasonable estimates of feed or via a feed management program that tracks inventory (as long as you properly utilize that system and adjust for shrink appropriately).

Let’s examine at a high level the various components (as shown in the chart with an example) to address that question and identify key items to project your true COP.

Let’s start with feed cost, which will be the largest and most volatile portion of the calculation. Feed cost should be based on what is projected to actually be fed on the dairy. That means a dairy producer should consider various factors such as:

Feed inventories need to be considered so you can actually calculate and project proper usage amounts.

Finally, a reasonable approach needs to be considered to project the actual costs of any purchased feedstuffs over the projection period.

This may include utilizing future prices from the CBOT (with proper basis adjustments) for certain items, projected market prices from feed suppliers or brokers for certain commodities and feedstuffs, actual costs for purchased ingredients, actual contract prices locked in via feed contracts or a combination of the above.

Now let’s consider the cost to maintain the herd. Consider the following to properly calculate the costs to maintain your herd: cull rate and value; whether the herd raise its own replacements, utilizes custom calf-heifer growers or buys its replacements; and the related income and expenses related to its situation. If cattle (either mature cow or youngstock) inventories are increasing or decreasing, that also needs to be considered.

What about other major costs of production? All costs related to labor should be considered including salaries, wages, payroll taxes, workmen’s comp and other benefits.

All other operating costs besides depreciation should then be considered and incorporated into the projection, again on an accrual basis so as to exclude the impacts of any cash-basis or tax-basis strategies.

Which should you use: depreciation, principal payments or market-value changes? Ask 10 dairy producers which is most crucial to them, and you will invariably get different answers. Each has merit when properly used. (However, if depreciation is used I suggest a straight-line method rather than an IRS-accelerated method.) Therefore choose one which makes the most sense for your dairy’s financial goals and objectives.

Other income and expenses – Consider the impact of bull calf sales, crop sales, patronage dividends (cash and non-cash portions) and any other unusual non-operating expenses.

With that said, the following are a number of considerations each dairy producer should keep in mind when calculating and projecting their true COP and BE:

1. It may be helpful to flush everything back to the per-cwt net cost (other income should reduce operating expenses).

2. Consider milk basis and show a separate COP and BE before and after milk basis to address Class III or Class IV prices and the gross milk price.

3. Don’t fully rely on historical COP or BE amounts, as feed price volatility will invariably affect future results, so implement a plan to account for that. You should, however, consider historical results for certain operating expenses and other projections.

4. Consider calculating your COP or BE on an energy-corrected milk basis, or similar basis, to fine-tune your projections further.

Once you have reasonably projected COP and BE numbers, you will be better equipped to make informed decisions to manage your dairy operation and its profitability. PD